On the Road to Motherhood: False Glow

A touch dejected and deprived, Olivia Stren learns that pregnancy isn’t the romantic journey she planned on. 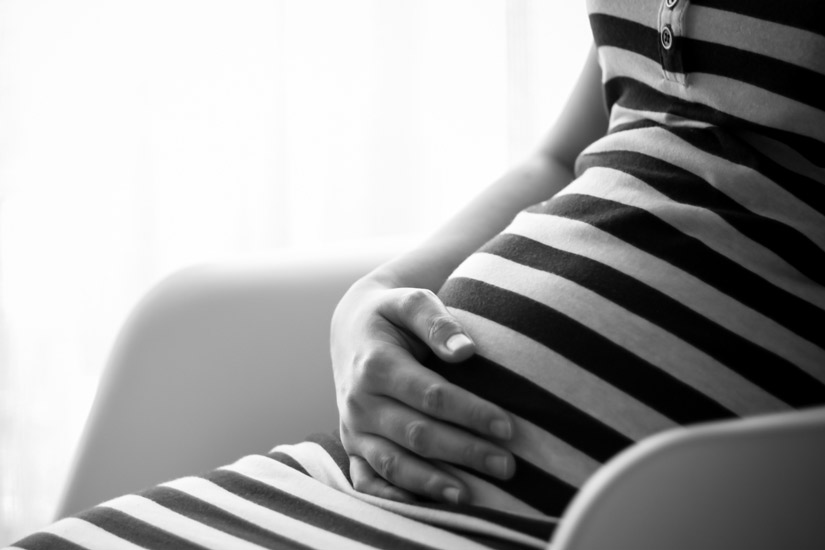 A few years ago, I had lunch with a friend who was six months pregnant with her third child. “I loooove being pregnant,” she said as she tore happily into a croissant, her gestational mane gleaming. “It makes me feel powerful!”

I never thought that pregnancy would make me feel formidable. (Power and I have never been especially simpatico). But I did like to nurse the fantasy, which I will now call a delusion, that being with child would somehow feel great. I imagined myself, high on a cocktail of serene hormones, eating brownies with festive, guiltless abandon while wearing charming trapeze dresses. And then I got pregnant.

At the Advanced Maternal Age of 38, I know that I should be grateful for this part of the narrative – the miracle of life, etc. And I am. But after a late-night trip to the emergency room about six weeks into my pregnancy, I was informed that I had what’s called a sub-chorionic hematoma – common enough but also sufficiently serious that my OB/GYN put me on bed rest for the summer.

Having a physician order me to lie down seemed, initially, like a dream come true. She added, as if sharpening the punishment: “Oh, and no exercise!” Could a prescription get any sweeter? It could, in fact. “Well, you can’t go jogging, but you can go shopping!” she told me. My husband, in the room at the time, proceeded to rub his face vigorously, gripped with fiscal anxiety. “You heard it from a professional!” I said to him gleefully.

READ MORE: On the road to motherhood: End of days

I had so often longed to adopt the lifestyle of my cats, and I’m a quick study: I spent my days napping, lounging, window-gazing, snacking and occasionally vomiting. This experience would have been a delight, except I was officially on “miscarriage watch,” which made the leisure less relaxing.

The rest did prove curative, though; the hemorrhage abated and then disappeared…at which point I developed severe heart palpitations, which made tasks like breathing difficult. My OB/GYN sent me back to the ER, where I sat next to a big-bodied woman pregnant with her sixth, breathing in a heavy gravel. “I think I’m in early labour,” she said to me and then shouted, in a smoker’s voice, at her bump, “Stop pounding on the trap door!”

A cardiologist with the German accent and I-am-God mien of The Young and the Restless’ Victor Newman informed me that I had developed heart arrhythmias and a murmur. “Because of increased blood volume, your heart is being asked to go 60 horsepower when it only wants to go 40,” he explained. “It’s struggling to keep up.”

READ MORE: On the road to motherhood: A walk to remember

Even my heart, as it turns out, is lazy. Victor Newman MD ordered me to sport a heart monitor on my abdomen for several days – a kind of fanny pack for the feeble.

While I was wired up like R2-D2, gradually assuming the droid’s spherical silhouette, a molar spontaneously dropped out of my mouth. I felt like a cross between a robot and a bum. “Gain a child, lose a tooth” goes an old proverb. My grandmother, evidently, had lost one with each baby. (Mercifully, for the state of her smile, she only had two daughters.)

But that was in Morocco during the Second World War, when calcium – rich foods were scarce. I’d lost my molar while eating an overpriced salad from Whole Foods. I reported my dental debacle to my OB/GYN. “I’m not up on my old wives’ tales,” she said, scribbling something on my chart that likely read “Patient is crazed.” Then she announced, “So, you failed your glucose test.”

After it was established that I had gestational diabetes, I attended a class to learn about the evils of bagels. Pregnancy, with its anxieties and discomforts, at least was a licence to eat baked goods. But, it turned out, a bowl of lentil soup and a piece of whole-grain toast sent my blood-sugar levels into the stratosphere.

“Your pancreas is really struggling. And lentils do count as carbs,” my newly acquired dietitian, Jade, informed me over the phone. “How big was the soup bowl?” she asked, as if I had been eating from a beer vat. “It wasn’t very big! And it was a legume potage, not a banana split,” I countered meekly.

READ MORE: The complicated journey to becoming a surrogate

“Does weeping count?” I asked.

Now I’m just over seven months pregnant, sitting in a café – its counters glutted with platters of sugar-dusted scones, hillocks of brownies and oven-gilded croissants – feeling like a squirrel let loose in a peanut crop. It’s time to follow Jade’s orders and take my underachieving heart and challenged pancreas for a walk home. Instead of a brisk trot or even a stroll, I hobble home like the English Patient. After all, I just found out I have sciatica.

My mother told me that pregnancy is easier when you’re younger. Cue Cher and make a memo to self: Turn back time. I’ll be sure to be younger the next time.

Until then, I’m in the final stretch – and each new day is pregnant with diagnostic and pathological possibilities.