They say money can't buy happiness, but is that really true? ELLE Canada explores the relationship between cash, comfort and joy. 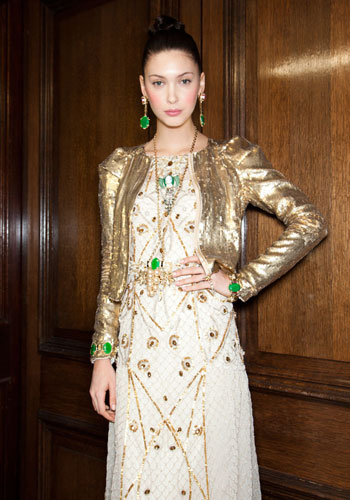 I know what will make me happy. All I need to attain an enduring sense of joyful exuberance is one lousy 1959 Les Paul electric guitar in pristine condition. That this can be bought for the low, low price of $325,000 is a minor impediment – at least, it would be in an alternative universe where money falls from the skies in great sheets and the sun shines continually in Vancouver.

Unless I steal Jimmy Page’s while he’s looking the other way or win the lottery, I will likely never possess what is widely regarded as the holy grail of electric guitars. For me, this is a source of deep and unabating sadness. But, even if it were within reach, would acquiring the object of my desire have the desired effect?

The root of all evil?
Tammy Strobel owns a nice little pied-à-terre in Portland, Ore. More accurately, Tammy Strobel owns an orteil-à-terre – "toe on the ground" – since, by almost any measure, the footprint of the house she and her husband live in takes up less square footage than the average parking space or walk-in closet.

At only 12 square metres and built at a cost of just $33,000, the home is beyond tiny. Yet Strobel, the author of You Can Buy Happiness (and It’s Cheap), has, quite literally, downsized her way into a happier, more fulfilling life – an idea she embraced while culling all her worldly possessions down to 100 items (yes, shoes included).

The result? No debt, less stress and a heightened sense of well-being. "The idea that you have to go bigger to be happy is false," she told The New York Times. "I really believe the acquisition of material goods doesn’t bring about happiness."

Strobel may be onto something. Although long thought to be significant to a sense of well-being, money may not promote happiness as much as suspected. In a 2010 study, Nobel prize-winning psychologist Daniel Kahneman reported that in a two-year-long survey of 1,000 U.S. residents, happiness levels did rise with income – but only up to a point.

Once a family income reached a relatively modest threshold of $75,000 a year (in high-cost areas; in other regions, this threshold would probably be lower), there was no measurable difference in reported happiness, regardless of how much more money was coming in.

How does money impact our relationships with others? Keep reading on the next page…

Yet the acquisition of
money is not merely neutral; according to recent research, money may diminish happiness by muting our ability to enjoy life. A recent study spearheaded by UBC psychologist Elizabeth Dunn and Harvard Business School’s Michael Norton (their book,
Happy Money: The Science of Spending, will be out in May) looked at how wealth affects our ability to "savour" positive emotions and experiences.

So having more money – and even thinking about money – seems to hamper our ability to appreciate something as simple as a piece of chocolate. And, by extension, other everyday wonders.

Money is insidious in another very basic way, says psychologist Sonja Lyubomirsky, a leading happiness researcher. "Having money raises our aspirations about the happiness we expect in our daily lives, and these raised expectations can be toxic," she writes.

In a sense, the ability to enjoy peak experiences primes the pump of expectation: Once you’ve had the best, everything else simply can’t measure up, and, as a result, the happiness you derive from lesser experiences is capped.

"They say you can never go back to holding hands," notes Lyubomirsky, "but it’s also hard to go back to…eating at chain restaurants after regularly partaking of the cuisines of Mario Batali and Bobby Flay."

Greed is good?
So is money as poisonous as chlorine gas? Not exactly. In Kahneman’s study, which proved that high income doesn’t automatically equal greater happiness, there was another finding.

Although it is true that respondents’ "emotional well-being" didn’t increase after incomes reached $75,000, their "life satisfaction" did: Those who had higher incomes reported being more satisfied with the way their lives had turned out.

So although the acquisition of wealth didn’t make them happier, it did, in fact, make them feel more satisfied. Of course, even a modest five figure income is inconceivable for many.

For years, researchers have known that people who live in wealthier countries are, on the whole, happier than those who live in poorer nations; average per capita income is one of the more telling markers of who is likely to be happy and who is not. But there is a caveat.

Which countries have the happiest citizens? The answers may surprise you. Keep reading on the next page to find out…

Although wealth is correlated with the happiness of nations, it is not correlated exactly. The "Satisfaction With Life Index," developed in 2006 by psychologist Adrian G. White of the United Kingdom’s University of Leicester, ranks countries based on data from UNESCO, the World Health Organization and the New Economics Foundation, among others.

On top is Denmark. At the very bottom? The Republic of Burundi. So far, so good, right? But it’s not just wealthy nations in the top spots. Relatively impoverished Vanuatu scored higher than Australia, while Japan came in at 90, just behind Ghana. And India – chockablock with a newly moneyed middle class – a place where inner peace is as common as chicken curry, was ranked at 125.

Clearly, happiness is not solely dependent on geography. Here’s another shocker: Research has shown that, in certain situations, you can buy happiness. Just not in the way we thought.

Again, Elizabeth Dunn and her colleagues lead the way. In a 2010 study, a group of students received a small or moderate sum of money (either $5 or $20), which they were instructed to spend by the end of the day.

Some were told to spend their cash on someone else; others were told to indulge themselves. The result: Those who spent money on others – or "pro-socially" — reported feeling happier than those who bought something for themselves. Charity, it seems, makes us feel good.

So give until it hurts – you’ll be happier for it. This dovetails with other findings that imply that the way you spend money is critical to the enjoyment you’ll receive from it. Although buying big-ticket items usually won’t make you happier, spending money on yourself is not necessarily a recipe for disaster.

Money spent on experiences – a trip to preternaturally sunny Vanuatu, for example, or a weekend at a spa resort – will pay happiness dividends, as will engaging in activities that promote some personal growth: Investing in yourself, through, say, a French-cooking course or archery lessons, offers a significant return on your investment.

Other ways to spend yourself happy? Don’t sweat the small stuff, or, more accurately, don’t ignore it: The regular purchase of inexpensive pleasures, from a $0.99 iTunes song to a night out with friends, provides a disproportionate bang for your buck.

And if you have a burning desire to buy something major, don’t just go out and buy it on credit – there are, it seems, happiness points to be collected if you have to jump through a few hoops and save up to buy something. The anticipation, apparently, allows for heightened appreciation.

That’s my plan regarding that ’59 Les Paul. If you’d like to help out by contributing a few bucks, you’ll feel better for it. I know I will.

Read more:
Break up advice: How to break up (without breaking his heart)
How to climb the social media ladder
Relationships: Being too nice has some surprising dangers
Why more couples are choosing to live separately