What happens when a Web-based flirtation meets the harsh light of reality? Not always disappointment, as it turns out. 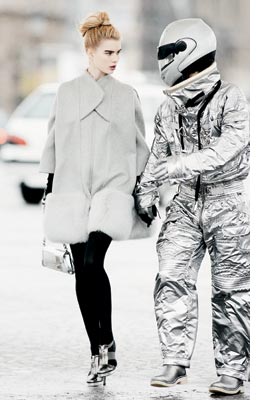 Long before Victorian poet Robert Browning wooed Elizabeth Barrett with a love letter disguised as a fan letter, cave dwellers may have been carving their hearts’ yearnings into stone walls. ("You’re the one I want to forage berries with 4-ever, xoxo.") Today, would-be lovers possess speedier means of satisfying their desires than wall painting or letter writing. It’s not uncommon for many romantic relationships to begin as "elationships"-innocent or
not-so-innocent IMs and texts along the lines of "meet 2nite?" Nonetheless, whether you save them, reread them or immediately delete them, emails and texts are the Internet era’s version of the epistolary romance.

For Martha, a single, 31-year-old publicist based in Toronto, a work-related email kicked off an intense "elationship" with a man more than 10 years her senior who lived in another province. “His first message was work-related, so I answered it,” she explains. “Then he wrote me back with some light banter, so I kept up my end of the conversation.” As the months passed, their daily online chat, interspersed with games of online Scrabble, became more personal. “We ended up telling each other about our lives. I was going through a rough patch with my family, so I confided in him.”

While there was no explicit declaration of love, just flirty and confessional emails,  Martha — like any single girl on the lookout for Mr. Right — spent a great deal of time wondering if their email connection represented a real-life romantic connection. She didn’t have to wait too long to find out: About six months later, they met in person. He was in town on business, so they met for drinks. But from the start,
all did not go well. The effortless intimacy they’d shared via email made their inperson chit-chat feel forced by comparison. Moreover, Martha was struck by their lack of physical chemistry. “In my mind’s eye, he was younger — even though I knew his age — and sprightlier. But when I saw him in person, he looked tired and older.” She became fixated on his “old man” shoes — they had Velcro clasps — and his paunch. The age difference, which hadn’t been an issue online, suddenly dominated the meeting. To make matters worse, he was unshaven and had bad breath.

“It was a shock,” says Martha. “I realized that the photos he’d been sending me were either just his best angles or from 10 years earlier. It didn’t really matter, but it took some getting used to. It was like meeting an approximation of who he said he was, who I thought him to be.” Though she never told him — and they’ve never discussed it — for Martha, that disastrous meeting put the kibosh on months of simmering romantic potential.

“Some people call it hyper-personal — when you’re emailing and disclosing personal things quickly,” says Michael Norton, an assistant professor of business administration at Harvard Business School in Boston who has studied the habits of online daters. “People feel they have this strong emotional bond, and then they meet and it’s bizarre…they don’t know the person well yet have felt very close.” According to Helen Fisher, an anthropologist and author of
Why Him? Why Her? Finding Real Love by Understanding Your Personality Type, email exchanges are just the first in a number of interactions, or “escalation points,” that mark the development of any relationship. “Relationships run on messages: They’ve got to be accepted; they’ve got to be returned,” she says. “All along the way, there are escalation points [in a relationship] and breaking points. So, basically, these people got through the first stage, which was the email stage; they found the person enormously intellectually interesting and funny and compassionate. But they just didn’t make it to the next stage, and those physical stages — actually looking at the person — are exceedingly important to the development of romantic love.”

Laura-Lee Bigongiari, 32, who works in human relations and lives in a suburb of Toronto, wasn’t looking for love or friendship when she signed up for an online language course more than a year ago. But, quite unexpectedly, she found both. “We were both studying German, and he saw me — on the site you have a little profile picture — and sent me a message one night. It was one o’clock in the morning, and I got this message that said ‘Studies going well?’”

That friendly query kicked off months of long emails and texts — and they weren’t talking about German grammar. “We started chatting — sending messages back and forth. I’d say that almost instantly, we realized we had so much in common. We clicked right from the get-go.” Their emails were vibrant sharing sessions that covered the gamut: They talked about home renovations, art and their shared love of travel. An offhand mention of her love of tea resulted in the arrival of a package of flowering jasmine green tea a few weeks later — “his first romantic gesture,” says Bigongiari.

FInd more on what happens when "elationships" do work out

Don’t forget to check out our summer style contest!

For Bigongiari, who had come out of a long-term relationship months earlier, not being able to meet her email friend, Cullen Van Brunt, 38, right away — he lived in Colorado — was an advantage. “It forced us to get to know each other without
sex, without any of the physical stuff getting in the way. We got to know each other’s minds so well that by the time we met, we were just so comfortable with each other that it was like we’d known each other all along.”

Separated by thousands of kilometres, the elovers met in New York City last April for the first time. Though she felt certain she’d met her love match, Bigongiari approached their first
face-to-face meeting with an open mind. “I knew that all we had to do was see each other and that would just cinch the deal, only I wasn’t 100-percent sure, so I said to myself, ‘Okay, slow down; you won’t know for sure until you meet him in person.’”

Van Brunt arrived, breathless, at the Manhattan eatery where they had agreed to meet. “He’d run halfway across Manhattan with this vase of tulips just to meet me,” says Bigongiari. “I love tulips; they’re my favourite flower.” Though she’d never seen a clear photo of him — “His picture on the site is him with a panda in China, and you really see more of the panda” — Bigongiari’s fear about lack of
physical chemistry evaporated instantly. “I thought he was absolutely adorable,” she enthuses. “The only thing I noticed was that he was really shy. He’d look at me and then kind of look away, and I thought, ‘Oh, maybe he doesn’t like me; maybe he doesn’t think I’m pretty or
maybe he’s not interested.’ As the night went on, however, I realized that he was just nervous.”

His nerves soon wore off as the friendship they’d built online translated fairly seamlessly into a 3-D romance. Bigongiari still remembers when he took her hand in his for the first time. “He was holding my hand, and I was looking down and thinking how wonderful and warm his hand was.” Before the end of the night, Van Brunt had asked Bigongiari to marry him. “He asked me several times that weekend,” she says, laughing. “I actually upset him because I said that I’d consider it — I was thinking, ‘I just met him!’”

During a trip to Van Brunt’s home in Colorado a month later, Bigongiari accepted his proposal. The twosome made their mutual affection official: Their wedding took place last September. After the wedding, Bigongiari sent out a friendly email of her own: “Long live the World Wide Web!”

Martha
didn’t get married or find the elusive romantic chemistry she was seeking online, but she did find a friend. She’s still in regular contact with her email partner, and, now that romance is off the table, their friendship has continued to grow online. “I would say that we’re very good friends, and we’re both intent on remaining as such. It’s been really wonderful getting to know someone so well in this manner, and I don’t regret a minute of it.”

Single on the dating circuit

10 reasons it’s great to be single