This hilarious novelist answers all of your most pressing romantic questions. 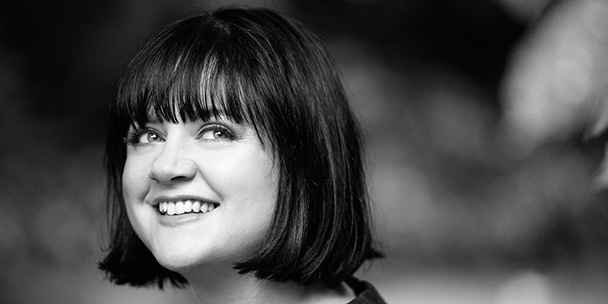 Bridget Jones, watch your back: Novelist Mhairi McFarlane’s heroines (most recently in the madcap It’s Not Me It’s You) are hilarious, a little hapless and all heart. This Scot’s stories make us laugh and cry, and it turns out she also gives great love advice.

Q: I met Juan at a bar, and was all over his good looks and charming personality for the three hours we spent chatting over pints. We started messaging the next day, and well…he uses mjrly pnfl txtspk. How do I look beyond his poor command of written English…or should I?

A:It’s over. Unless he’s going to claim his Bieber age cousin kidnapped his phone, this sort of nonsense is a stone cold boner killer. Sorry for my clarity.

Q: My friend Brenda just let slip the fact that my boyfriend has asked her to go ring shopping with him for my engagement ring. I know the proposal is coming, so that’s not the big deal…but the real problem is my totally style clueless BFF advising my equally fashion challenge BF on the biggest jewellery commitment of my life! Is there anyway to stop this before I’m stuck with an eyesore for the rest of my married life?

A: Right, emergency field triage is needed to bandage this wound before it gets any worse. Get the Tiffany’s brochure, circle the one you want, put it under his nose and say ‘If I ever got engaged I’d be gutted if I didn’t get a ring that looked EXACTLY LIKE THIS OR VERY NEAR. OH BOY WOULD I BE RAGING, WHAT A MESS THAT WOULD MAKE. But, no worries. I guess a proposal’s a way off.’ It’s not subtle, but some things can’t be left to subtlety.

Q: Can a guest wear white to wedding without being the worst human being ever?

A: DO NOT DO THIS. It’s a trap. I REPEAT. A TRAP. You know why? Because even if the bride and groom are cool with you wearing white, I promise you, that memo’s not gone round the generations. There’s absolutely guaranteed to be some tutting relative who makes their disapproval known on the day. So put it this way, does your white garment look great with a big badge as accessory, saying ‘They Said It Was Fine’? No? Then choose something else. Trust me on this. I once did white with pale pink accents, and it was barely any better. ‘Bridesmaids sit at the front of the church, dear’ was one of the more well meaning remarks 🙁

Q: I arrived a little early for a Tinder date last night…only to find my “match” was having drinks with another lady who was definitely not a friend. I was so appalled at this production line approach to love that I cancelled the date before he could see me (last minute “migraine”), but now my friends are telling me I was being way too-old fashioned about this. Thoughts?

Q: My husband and I consider Elton John’s “Can You Feel the Love Tonight?” to be “our song”. (We met at a Lion King performance, okay?) Then I ran into his high school girlfriend last week, and it came up in conversation that it had been their song too! Does this mean my husband is some sort of sociopath?!

A: No, he just really really likes that song. As long as they didn’t marry to it, you’re OK. Look, if Prince William can give Kate his mother’s engagement ring and that be considered good luck, then you can share a Lion King tune. If you must.

Melissa McCarthy on why fashion should feel great for every body