If you're tired of being a happiness junkie, always in search of your next serotonin hit, take a chill pill. 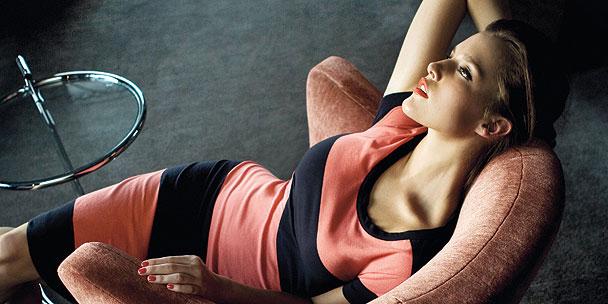 My
mother has been telling me all my life to count my blessings. I always thought it was one of her more annoying phrases, along with “Well, life
isn’t fair,” so it was a surprise to find myself saying it the other day.

The scene: in bed on a Sunday evening after a blissful weekend. The problem: my boyfriend in a less-than perfect mood. Turns out, the problem
was the blissful weekend. We had been staying at a cottage with friends, and my beloved wanted to know why
we weren’t blessed with a weekend retreat.

He smiled. “That’s true.” And we drifted off—at least content, if not ecstatic, with our lot.

And you? Do you spend time thinking about how much happier you’d be if you were richer, thinner, more successful? Do you settle for being content? Contentment doesn’t sound very sexy or aspirational. In the face of happiness, it doesn’t seem like enough. But then I wonder: Have we become a nation of happiness junkies, chasing the next serotonin hit? Thousands of articles,
self-help gurus and books tell us we have, from Gretchen Rubin’s
The Happiness Project, which charts a manic year of testing different ways to achieve happiness, to the more revered
The Art of Happiness by the Dalai Lama. In our self-centred age, happiness is the Holy Grail. We will move cities, end loving relationships and quit jobs and, when asked, we simply shrug and say “I wasn’t happy.” We’re always stating that life is stressful, but haven’t we made it so? Don’t some of us exhaust ourselves by chasing down more money, a better
job, a cooler flat, a nicer partner, a slimmer figure or a more exciting social life?

In any case, it’s not working. In 2007, researchers at Cardiff University in Wales found that, in general, people were happier in the 1930s (Great Depression, poverty, lack of iPhones and all) than they are now. Last year, it was reported that women are less happy than they were 40 years ago. Richard Laylard, an economist at the London School of Economics, argues that the financial comforts of the developed world don’t make us any happier.

Nobody has ever done a scientific study on the relative levels of happiness on my grandma and me, but when I think about her—not rich, not remarkable but house-proud, sociable and delighting in a long marriage to my granddad, her garden and her weekly ballroom dancing—I just know that she was content (more content than me, perhaps). Curiously, her happiest days were during the Second World War. She and her friends, faced with losing everything, knew what was important, and they lived, by all accounts, with vivid intensity— even if it was in old clothes and blacked-out rooms.

So, is trying to be happy making us unhappy? For instance, I love my boyfriend. But could there be someone more fun? Kinder? Even writing this, I can feel my discontent rise, along with panic that I’m not living in optimal happiness. If I think about his qualities, though—about how no one is perfect and I’m on to a good thing here—my heart swells with affection. Another example: I have a great job. But could I have a better job? Why don’t I? Because, says my inner voice, I’m not hard-working enough or I’m too shy to push for it. Today, the pursuit of happiness isn’t so much a right as it is an imperative: If you’re not fully dedicated, you’re failing.

But it turns out that the happiness we believe is at the end of the rainbow probably isn’t there at all. Dr. Robert Holden, director of The Happiness Project, says that chasing specific goals in search of happiness is a bad plan. “Most people’s strategy is to improve their life circumstances,” he explains, “but studies that look at people’s happiness over many years show that these have a negligible effect. A pay raise makes you feel good for about 72 hours, and then you return to how you felt before. You always come back to a set point.”

In 2008, Daniel Gilbert, a psychology professor at Harvard University and author of Stumbling on Happiness, noted similar findings. A year after their respective lifechanging events, lottery winners and paraplegics were equally happy. It sounds remarkable, but it is. We are all susceptible to “impact bias”—in other words, beliefs about how an outside event will affect our lives.

But don’t be too hard on yourself. Philosopher Alain de Botton, who wrote Status Anxiety and runs The School of Life in London, says: “It’s inbuilt to pursue happiness; Aristotle said so in the Nicomachean Ethics. Ideas of what makes people happy change, but the notion of pursuing happiness is universal.”
Discover happiness conclusions and contentment tips on the next page…

Perhaps, these days, it’s the standards we set that are turning happiness toxic. It hasn’t escaped me that a lot of things I think would make me happy are quite, well, materialistic. Of course, other people have an interest in whipping me up too. The message of any ad is “You’re not as happy as these people, are you? No? Well, buy this.”

From every side, we’re encouraged to aim for the stars and fight for what’s ours because, of course, we’re worth it. But Gilbert’s studies show that our brains are adept at learning to love the circumstances we land in. Even more crucially, this process is actively inhibited by increasing the options we feel we haven’t been able to explore yet. In the face of the last year’s economic gloom, contentment seemed like an appropriate goal. Straining every sinew to possess the latest must-haves doesn’t do us much good, and it doesn’t make us happy either. And that’s because, as Holden explains, relying on external factors is an unsafe strategy. “When we talk about happiness, we often mean pleasure—which always requires an external stimulus and is fleeting—or satisfaction. But satisfaction also has an external focus— “I’m satisfied because of this thing”—and is compared to what others have. Then there’s the other happiness, which you could call contentment—the place in us that is already happy.”

So, what would contentment mean for you? It sounds so simple. You just lower your expectations, give up winning the Oscar before you’re 45 and there you are: content. But Buddhist monks spend their lives freeing themselves from desire and they have to live up a mountain in Tibet. It’s harder than it seems. “We are, by nature, creatures of striving,” says de Botton. “It shouldn’t mean that we must give it up—just recognize that it will never stop.”

I’ve learned that the finish line keeps moving. Knock one to-do off your list and another replaces it. So, no, you don’t have to glumly give up on all your hopes, nor should you focus so relentlessly on what you have to achieve that you forget what you already have.

Recently, I’ve been feeling more content than ever. It has happened mainly by accident and took me a while to notice. But after another day of feeling, you know, fine, I realized that something was up. I haven’t given up on worldly success, but I did give up on a big, ugly project that was draining my time and energy. It might have been my path to fame and fortune, but if that’s the only route, I’ll pass. I’ve been spending time with my friends and doing work, which isn’t glamorous or lucrative but has been totally absorbing.

And you? What makes you content? Your relationships? The things you value? The areas in which you don’t need to compete? If so, congrats! You’ve hit on what psychologists believe makes us happier. So, as you try to create your perfect life, focus on what has proven to make people happy: Remember to count your blessings. You might find that, in the end, just being content is what really makes you happy.

Read moreLove yourself! 5 self-love tipsAre you a people pleaser?Choosing your relationship battlesImprove your dating success