JJ Lee on the first time he told a girl she was beautiful. 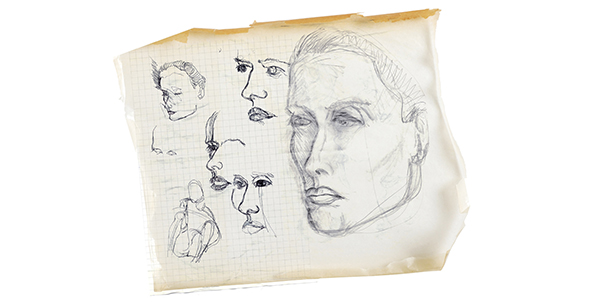 In the summer of 1985, on the South Shore of Montreal, when I was 15 years old, I thought myself an expert in the matter of beauty. My qualifications were based on avid reading of my sisters’ fashion magazines, including glorious issues of French ELLE, with Isabelle Adjani on the cover, and my recent completion of Grade 9 art class, where I had been discovered as the fourth-best draftsman in the school. I kept sketchbooks; well, they were actually Hilroy ruled exercise books. Because, like many boys, I came to the visual arts by way of comic books, I filled my Hilroys with members of the Fantastic Four and the Avengers.

Both superhero groups had female teammates, so at a young age, I took up the challenge of rendering their fulsome figures. They were modelled after stunners from an earlier time. Invisible Girl had short, “mom” hair like Jacqueline Bouvier Kennedy, but her body skewed toward Marilyn Monroe and Jayne Mansfield. The Scarlet Witch, a hex-casting, fishnet-wearing mutant, looked like Lauren Bacall or postwar Rita Hayworth, circa Pal Joey.

In later sketchbooks, their buxomness gave way to the lithe, sun-kissed girls of California, like Farrah Fawcett, Bo Derek and Jane Fonda. And they, in turn, were eclipsed by darkly introspective near-tomboys with punky bobs and blunt cuts, like Daryl Hannah (Blade Runner), Ally Sheedy, Phoebe Cates and Molly Ringwald.

By drawing these figures in turgid, non-prodigious HB pencil, I began to navigate the twists and turns of what makes a woman beautiful. I struggled. I couldn’t quite negotiate all the bosoms, wasplike waists and long, tapered limbs. Often, I would locate the breasts too high on the chest. They would look like citrus fruits glued to a man’s body, but I laboured on. I trained my eyes, if not my hand, with each line I put down and erased.

Eventually these drawings converged into one being – my imperfectly drawn perfect female, repeated over and over. I used to think I would one day find this woman and even marry her. She was a sculptor, but she smoked cigarettes and could weld. I drew her the way some people doodle daisies or cubes. She would pop up in margins and on envelopes. But in that summer of 1985, she suddenly dropped off the pages. She had been replaced by Wallace.

MUST-READ: ELLE First: The one that got away

Wallace is a real woman, but Wallace is not her real name. I still know her siblings and parents, and I well remember how on one drunken night a male family member confessed that he would come with a shotgun after any man who did Wallace wrong. So, in the interest of survival, I have altered details and chronologies to cover my tracks and provide plausible deniability.

Wallace was younger than me. (See? I’m already in trouble.) I had known her since she was four years old. (I can feel the crosshairs on my back.) And for years I paid her no mind. (Phew.)

My earliest memories of her are as the neighbourhood oddball. She had no friends the same age. Instead, she followed her older siblings about, trying to insert herself into their fun. She would turn over game boards in the middle of play and knock over dominoes before all the tiles were in place. She would move chess pieces when no one was looking. I, like everyone else, tried to ignore her.

At gatherings, parents would coo at their daughters and tell everyone in the room how beautiful their girls were – but not Wallace’s parents. Serious folk, they wished their daughter to be loved and respected for other reasons. Wallace would sometimes scrunch her face as if to say “What about me?”

As a child Wallace was not ugly, but she probably thought she was because no one made her pretty. Her mother cut her hair with the aid of a bowl. She wore glasses with thick purple frames and even thicker lenses. Her eyes appeared as strange brown fish afloat in Vaseline. Her nose hooked into a beak. As a regular guest at Wallace’s home, I was allowed to eat their food and drink their grape juice. If the brothers were at soccer practice, I could sit on their beds and read comic books. I was also permitted to lounge in the living room and listen to records. Often, Wallace and I would be alone in the house. Most times we kept away from each other, but on this summer day I plopped down on an armchair opposite her. She was listening to Roxy Music’s Avalon.

Maybe it was the languid music, maybe it was adolescent libido…all I can tell you is that I stopped ignoring Wallace. I saw that she was 13. Her hair now fell in straight, sandy tresses. She had grown taller than me by two inches. Wallace’s limbs were usually everywhere – she had sprouted so quickly that she developed a jangly looseness with her body – but now she had neatly folded herself into a ball, sitting between the sofa and the coffee table. Yes, she still owned frames fit for a dowager matron, but she had taken them off, burying her face in her forearms and knees to focus on the music.

The day had been cool and the sky grey. Then the title song faded with the sultry vocal solo. A brilliant golden late-afternoon light cascaded through the weeping birch in the backyard and fell on her. She felt the warmth and raised her face up to it, and I fell in love with Wallace.

I knelt down beside her and started to kiss her, and for a minute she accepted the advance. But suddenly, as if a door had shut, she pushed me away.

Now, as a 15-year-old, I was not well equipped to handle moments of awkward sexual tension. I knew I couldn’t say “I love you.” Those words, I had learned from earlier experiences, could die in the air. Instead, I said to Wallace, “You are beautiful.”

I said those three words plain and flat, with all the expertise of an art critic or a beauty-pageant judge, as if I were telling her a bald truth like “The Maple Leafs suck.” Her face took on her familiar pained scrunch.

The words had struck her. She would never look at herself in a mirror the same way again. They had struck me too. And I felt doomed because I knew we had our whole future to separate us from the simple closeness of the moment. That was the day I began a lifelong career as a maudlin nostalgic.

The words thrilled her and made her fearful. Being told such a thing separates you from yourself. You begin to see yourself through the eyes of others.

I grabbed a sheet of graph paper and began to sketch, following the lines of her face, her cheeks, her nose, as best I could. I drew a sharp jawline. Her nose proved not a beak but aquiline. Her eyes held a sadness no 13-year-old should ever possess. It was not a true likeness, yet it was Wallace. She knew it too. It was Wallace stripped of innocence and youth. It made her sad. Her brothers and parents came home. She grabbed the page from me.

For two years, Wallace posed for me whenever I asked. She probably felt she owed me. I had recognized first what she couldn’t see in herself so she let me struggle to make my drawings, then paintings, as beautiful as I saw her, but we never kissed again.

Wallace eventually resented our sessions. Echoing her parents’ sentiments, she grew to distrust my obsession with her beauty. She would keep me at an emotional distance. I asked her once as she posed what she was thinking. Her cryptic answer: “I’m watching us from above.”

One midnight, in a final ploy to win her over—to have that first kiss again and a thousand more—I threw pebbles at her window and climbed into her bedroom. I presented Wallace with my sketchbooks. It backfired. She accepted them as evidence of how I only loved her for her looks. I protested.

She started dating other boys, and I stopped dropping by. We keep in touch, but we’re not close. She has three daughters, and, though I never ask for news about her love life and she never offers to tell me, I know her heart has been broken.

Recently, she confessed to me on the phone that she still keeps my sketchbooks in a hidden drawer in her desk. I asked her to send me that first drawing I made. A few days later, I received a scan by email with a note: “Sorry, the original’s mine.”

Yes, the proportions and the cross-hatches are wrong. The line weight is clumsy. But, even so, the drawing is a dead ringer for how Wallace looks now. My great failure nearly three decades ago was that I fell in love with a woman who didn’t yet exist.

Each month, we ask a Canadian writer to share a story about a significant “first” in his or her life. This month’s ELLE First was written by JJ Lee, the author of The Measure of a Man: The Story of a Father, a Son and a Suit.