Johanna Skibsrud on the first time she travelled alone. 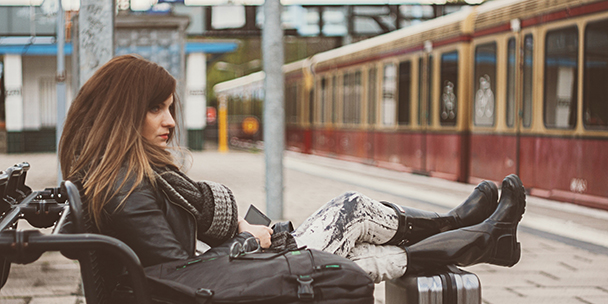 I doubt that I will ever board a train again without recalling – and, to a certain extent, feeling – the perfect pleasure and excitement I felt at 18 standing on the platform at Gare d’Austerlitz in Paris, about to embark on my first solo voyage. I remember that late December morning clearly: how cold, how grey, how nearly empty the station was – though it was almost certainly not. How the buildings of Paris, which had appeared so impenetrable from the city centre, seemed to part as the train picked up speed and we plunged into the (to me, anyway) as-yet-uncharted wilderness beyond.

All of this was a remarkable and long-anticipated departure from what I considered to be my lamentably ordinary experience to date. I had spent most of my life surrounded by the rural landscape of Pictou County, N.S., and thus far my explorations had been pretty much limited to the backwoods of my parents’ farm. To be fair, it wasn’t the countryside itself that imposed the limit; in fact, I had yet to discover any end to it, though this was not for lack of trying. Even beyond its physical dimensions, the landscape had a sense of illimitable possibility. Everything got ploughed under in the fall and returned in the spring – but always with a difference. It was strange, I thought, never to be able to mark the moment in which the transition occurred. But again, I tried. Each morning, as I headed to the bus stop at the end of the drive, I would gaze out across the field that stretched between the treeline and the river, attempting to fix the image in my mind like a photograph. “Remember this,” I would tell myself a little fiercely, “in just this way.” But I knew, even as I spoke the words – or perhaps precisely in the moment that I spoke them – that I would not. I was at once fascinated and dismayed by the fact that soon, despite my best efforts to memorize that landscape, an entire season would have come and gone and somehow I’d have missed it.

I was shocked at first to find that, unlike the transient, ever-changing countryside of my youth, history in Europe exists in concrete, visible layers. My own impression of this, however, was softened by my introduction to the Continent and particularly Paris – by Americans: Henry James’ rebellious Chad Newsome from The Ambassadors, for example, whose relocation to Paris from Woollett, Mass., marks precisely his escape from everything staid and tired and old; Gertrude Stein, and her rapturous evocation of life at 27 Rue de Fleurus in the 1920s and 1930s and the seemingly unlimited supply of creative energy that circulated there; Hemingway’s pronouncement that “there is never any ending to Paris,” that it would stay with you – “a moveable feast.”

These writers had managed to imbue possibility and indeterminacy into even the most impermeable histories and enduring facades. That their books had been written in what was now the distant past did not render the Paris that they revealed to me any less real. I read these books as if I were writing them myself. Certainly, the sense of discovery and excitement I gleaned from them was, at least in large part, my own. It seemed, therefore, to escape all boundaries of place and time.

So much was this the case that it was Jack Kerouac’s On the Road – not any more appropriately local text – that I took with me as my primary reference on that first solo voyage. It was the sheer momentum of Kerouac’s journey (rather than any details of the events described – events that, more or less to my chagrin, I had not even come close to experiencing) that resonated with me. As well, of course, as the pure desire at its root – desire not for anything specific but for the sheer pleasure and possibility of desire itself. It was with this desire – as though it were a physical object, lodged in my throat – that I boarded the train bound for Strasbourg. And my journey began.

Over the next six days, I travelled nearly the entire perimeter of France: from Strasbourg in the east, through the Alps to Grenoble and then on to the Côte d’Azur – where, to the bemusement of the locals who steered clear of the beach in winter months, I forced myself to swim. On to Van Gogh’s Arles, where, no backpackers hostel to be found, I rented my first hotel room – a room decorated entirely in pink – and where the proprietors, puzzled by my solitary travel, took pity on me and invited me to join them for a meal. Afterwards, I ambled outside and came upon a small network of streets that gave way to a somehow achingly familiar empty field. I recall that I stood there for some time, imagining how Van Gogh must also have stood there once; how he must also have gazed out against the limit imposed by that empty horizon, making preparatory sketches for Field With Poppies or Wheatfield With Crows and thinking (just as I did then) “Remember this” – knowing full well in the moment that he did so that all was just as good as lost. I continued on to Avignon, where I discovered that the Pont d’Avignon, made famous by the song, juts out only halfway across the water and is off-limits to dancers – not that I had the courage or energy to try. I was tired, having by that time slept several consecutive nights on trains. And hungry. Besides the free lunch that I had chanced upon at Arles, I don’t recall eating another hot meal. It is no doubt at least partly for these two very simple reasons that I can remember in such detail – that I can still practically taste – the bread I purchased that evening from an unassuming boulangerie off the main square. For better or for worse, I doubt that I will ever quite be able to repeat the precise com-bination of fatigue, hunger and loneliness that led to my eating that bread with nearly divine satisfaction – as though it answered, indeed, my every desire.

But it was my arrival in Strasbourg that remains etched in my mind. For so long had I been anticipating that journey for the sake of the journey itself, and not for the purposes of getting anywhere, that it was a surprise when we actually arrived. The city itself meant little to me beyond its mark at the periphery of my rail-pass map and the echo of its syllables as it rang out in the train corridor, announcing itself at every station. I do not think that I was prepared for any aspect of that trip, so pure in its idea form, to take on actual physical dimension – to become a real place that I would be obliged to actually enter and wherein I would be forced to make certain unalterable choices: what to eat, where to sleep and what to photograph. Even the simplest choices would turn out to have consequences that I would not be able to undo. But – I reminded myself – those choices, as well as their con-sequences, would be wholly, utterly, my own. This was the responsibility that I had anticipated with such delight, and now, finally…it was mine. I was alone, in an unknown city, the entire world spread out before me I tried to taste this fact. To recognize it. To have it be true. But as I stepped onto the platform and made my way, without checking my bearings or asking for directions, across the wide square in front of the station at Strasbourg, I felt only empty and alone. I could not detect within myself even a trace of the feelings that I had so far associated with freedom: exhilaration, abandon, elation, joy.

These were the emotions that my friends and I used to experience as we drove around in circles on Pictou County roads or drank filter coffee and tugged awkwardly on cigarettes in franchised cafés when we were supposed to be at summer jobs or in school. It wasn’t that I felt sad and, though very much alone, I wasn’t exactly lonely – yet. It was just that, suddenly, nothing seemed to weigh anything. Even my backpack, which was heavily loaded. Even the desire (a physical object, lodged in my throat) that I had when I boarded the train just hours before seemed suddenly to have disappeared.

I stopped, without exactly intending to, in the middle of the square. And, finally, it hit me: This feeling – which was not even properly a feeling – was the adult freedom that I had anticipated and desired for so long. Somehow (so blank and light and empty was I), it wasn’t a disappointment. I turned, very slowly, in a single rotation. And then – just as suddenly as they had disappeared – the backpack’s weight and dimensions returned. In the distance, a clock struck the appropriate hour. The immense responsibility that I assumed in that moment was not lost on me; I adjusted my straps, took what few bearings I could and headed off in my singular direction.

Each month, we ask a Canadian writer to share a story about a significant “first” in his or her life. Johanna Skibsrud’s debut novel, The Sentimentalists, won the 2010 Scotiabank Giller Prize.

READ MORE:
The ties that bind: Discovering the power of female friendships
Signed, sealed, delivered
36 questions to get to know yourself better – imperfections and all
Long distance love: Can it survive on Skype alone?