Sarah Selecky on the first time she bought a house. 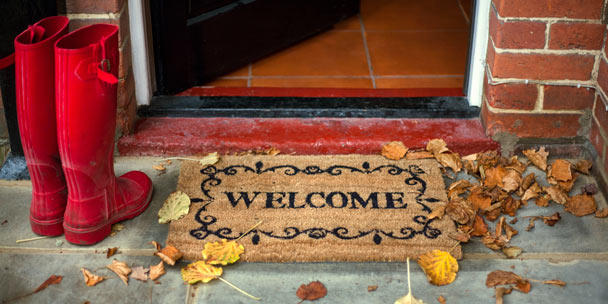 I knew very little about the real estate market when Ryan asked me if I wanted to buy a house together. We lived in Toronto, and I thought that the kind of people who talked about mortgages – people who read the Financial pages of the newspaper, for instance – considered Toronto one of the most expensive markets in Canada. What did I know? I only read the Books section. I felt unprepared. But I understood Ryan’s point: Why were we paying so much rent when we could be investing in our own property? Also, his brother had just bought a house in the east end and he seemed okay. So, you see, we had no real strategy.

We went to our first showing. This is where I met the Northcote House. It was, in all ways, perfect. It was on the best street in the west end. The kitchen was painted my favourite shade of green. They even had our cookbooks on the shelves! A lilac tree and hanging wisteria grew outside, the master bedroom had a bay window and the ensuite was fitted with a deep, luxurious claw-foot tub. When I crossed the hall to check out the other bedroom (read: my office), I spotted a wall painting over the warm-red exposed brick that read “Sarah’s Room.” Sold!

Because I had fallen in love with “Sarah’s Room,” I was in no hurry to see a second house. It had been a few weeks, and I still felt like I’d just been dumped. I wasn’t ready to start dating again. The second open house we came upon randomly, while strolling down a tiny street I’d never seen before. I waited outside the wooden fence with our bicycles while Ryan did a walk-through. As I waited, I indulged my dejected feelings. We would never find a house as nice as the Northcote House. We could never afford a house in the west end, period. Oh, God, we’d probably end up putting all our money into a house with asbestos insulation and a flooding basement and go broke trying to fix it while we became sick from the black mould and we’d fight all the time and eventually break up. Then Ryan came outside, with an expression on his face I couldn’t understand. Was it hope?

“We can’t afford this one either!” he said with a big grin. “But we can almost afford it. It’s less than the Northcote House. You should see it.”

When I walked into the house, it felt tall, optimistic and poised, like a J.Crew model. The Northcote House also had this camera-ready feeling – back then, I didn’t know that this was simply the open house “look.” It was as if a photographer had said to the living room “Turn your face to the right – lift your chin – good! Stay there. Look natural.”

The house was sweet but too big. Orange gerbera daisies perched in bud vases in all the rooms. It smelled clean, like fresh newsprint. In a red leather club chair in the corner of the room: the real estate agent. She was the first one I’d ever met. She looked an awful lot like the picture I’d seen of her, on the grey plastic sidewalk bench that had just gone up at the end of our street: the cheekbones of a superhero and eyes made of steel. The sun came in the front window and fell onto her silver hair. When she looked at me, I sensed that she was looking past my eyes and hair and boot-cut jeans and right into the depths of my soul. She did not stand up. She merely smiled – subtly. I sincerely believe that, at this point, she cast a spell on me. This was the second house we didn’t buy.

Two months later, Ryan and I made the House List. We’d each had separate experiences with List-writing before, when we were single. (On my List: non-smoker, vegetarian, enjoys hot weather. On Ryan’s List: non-smoker, vegan, enjoys the outdoors.) Those Lists had worked. So we believed in the hocus-pocus enough to do it again. I grew up Catholic; I appreciate a good ritual.

I used a fresh notebook for the task. On the first page, we wrote Must Haves:

Then on the second page, we wrote It Would Be Nice To Haves:

We made our qualifications specific. This was my way of making sure that we didn’t settle. If I had the List right there in front of me, I couldn’t be coerced into buying the first house the agent showed us. (Come to think of it, this had been the philosophy behind my first List too.)

We made the call one sunny day in April. Ryan and I sat on the front steps of our rental home with the cordless phone and the number we had found on that agent’s sidewalk bench. It was warm enough to be outside in flip-flops. The sand from the winter melt was still crusting the sidewalks, and the neighbour’s magnolia tree had started to form pink buds. Ryan dialed the number.

MUST-READ: How to negotiate a higer salary

“We’d like to begin looking for a house,” he said. He paused. “Why, yes,” he said. He looked at me, surprised. “Yes –” he said again, “that was us with the bicycles.” Okay, remember when I said that the leather chair in the second open house was red? The truth is, I can’t remember if it was red or black, or even if it was a leather club chair. I’ll admit that. It seems like it was a red leather club chair, but I can’t say for sure. The feeling that it evokes is true, even if the detail isn’t specifically true. Occasionally a writer, like anyone, experiences moments that are extraordinary and true, but the writer knows that these moments can never be successfully used in a story. Even though the moment might be terrifically poetic and nuanced as it is observed, there is such a thing as a moment that’s too extraordinary to be believable in fiction. I come up against this problem often – I wish it had a name. So the unfortunate part about what I’m about to write for you is that it’s an example of this phenomenon. It will sound too perfect – probably much more unbelievable than that red leather club chair. But, in actuality, there’s an even higher percentage of truth in this unbelievable scene. I’m going to write it anyway, because it’s important to me to be honest: This is not fiction, after all. I’m also writing it exactly as it happened because I want to show you one reason why I believe in magic.

“Well,” Ryan said to the agent, “we made a List.” As he listened to the voice on the phone, the sky opened up. An invisible rain cloud soaked our front yard and our front yard only. The sunshine was still brilliant and unwavering. We scrambled off the steps and onto the porch, where the awning protected us from the rain. It was the kind of rain that creates a glistening buzz in your vision—the heavy drops coursed down with such vigour that we could not see the house across the street. But the rain reflected the sunlight with gold sparks. Our yard came alive with the cool, moss-and-birchbark scent of rain.

Meanwhile, Ryan was writing things down: a street, an address. He wrote This Friday. He underlined this three times. Then he said thank you, and when he hung up, the rain stopped abruptly. It was quiet. We sat on the porch, stunned. Small, rhythmic drops rolled off the porch awning overhead. “She knew who I was,” said Ryan. “She remembered us. She said, ‘I wondered when you would call.’”

Things moved quickly after that. The agent put us in touch with her assistant, Paulette.

“I have goosebumps,” Paulette said. “Have you seen this house?” The house she had in mind for us had all of our Must Haves and half of our Nice To Haves. It also had a handful of surprise Didn’t Even Know We’d Like It So Muches. It was going on the market that Friday. And we could afford it. “What are you doing right now?” she asked. “Can I take you there right now?”

The red-brick house was on a small, quiet street in Parkdale, right across from a big green space. It was built in the 1950s in a blocky style that reminded me of the kind of house I built with Lego when I was a kid. It was detached, with three bedrooms, a nice backyard, an upstairs balcony facing southwest, an ash tree for shade and a newly renovated kitchen with exposed brick, a granite countertop and a gas stove. And there were big hardwood floors for dancing.

The next week, we put our offer in. It was listed at such a low price – it was too good to be true. But we got it. We bought the first house the agent found us. Now, five years later, we love it more than ever. The fireplace doesn’t work, our king-size bed just barely fits in the bedroom and I wish we had a claw-foot tub. But, for the most part, it’s perfect. It’s exactly what we wished for.

Roald Dahl said, “Those who don’t believe in magic will never find it.” I think he’s exactly right. Magic has a mind of its own; it’s a force that’s bigger than us, bigger than we can understand. It probably encompasses everything. But if you believe in it, you have to make sure that you’re there to listen to it. I don’t think that our Lists worked just because we asked for certain things. It’s more complicated than that. I mean, who was the magician here? Was it the real estate agent? Was it Paulette? Was it Ryan and me? I think that true magic is the way everything is inter-connected, and when we believe in it, when we allow our own magic to mingle with everything else that’s out there dancing around, we realize that our dreams are always coming true.

Each month, we ask a Canadian writer to share a story about a significant “first” in his or her life. Sarah Selecky’s short story collection, This Cake Is for the Party, was a finalist for the 2010 Scotiabank Giller Prize.