ELLE First: The God of death

Padma Viswanathan on the first time she attended a festival for the God of death. 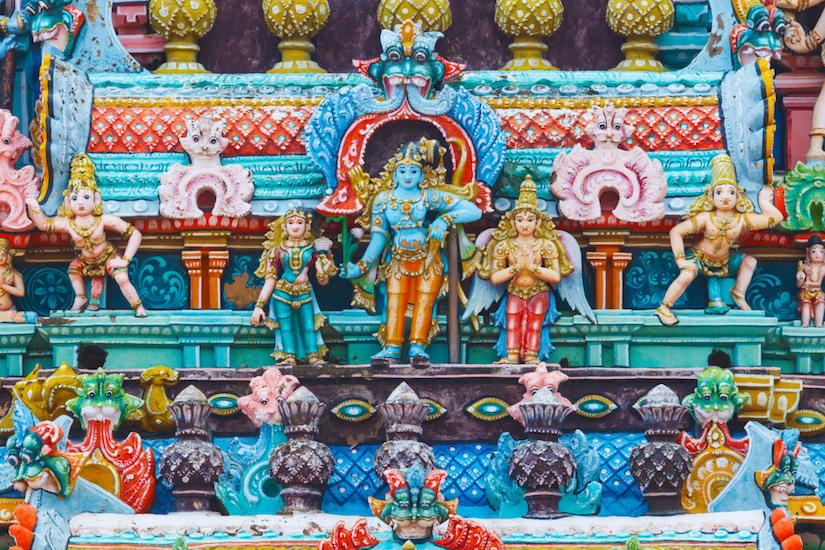 At the end of a certain summer, when I was 21, I got on a bus in India. I was with my father’s sister and her husband; this trip was their gift on the eve of my farewell: a weekend in his ancestral village, where we would attend the annual festival of the local god.

Historically, villages large enough to contain more than one caste were divided into caste sectors. Because the Brahmins, who were scholars and priests, claimed a monopoly on spiritual purity, the temple was usually on the Brahmin street, called the agraharam.

As far as I knew, these divisions had been broken down by laws against caste discrimination. The Brahmin quarters where my parents had grown up were now populated by various castes. But my uncle informed me that our destination on this day was an exception: We would be staying on “the last intact agraharam in Tamil Nadu,” he said with pride, or with fiendish delight in my discomfort. By “intact” he meant, of course, segregated.

This was my first extended international trip on my own. I had travelled to Tamil Nadu, the state in southern India where my family is from, and lived there for four months, though not with my many relatives. Instead, I had
taken a volunteer posting in a tiny community of tenant farmers, where I thought, vaguely, I might do some good. I don’t know what made me think I had something to give them, but they were too polite to send me away.

So I just lived there for a summer, getting to know everyone and hoping for a chance to be useful. Gradually, I learned the hardships of their lives: highly incentivized tubal ligations in tandem with high infant mortality; the daily challenge of finding clean water and sufficient food; debt and more debt; accident and disease; and the oppressions of caste. Which is not to say that there wasn’t humour and fellowship: I went to their weddings, played with their kids, ate in their homes. I listened, and showed respect, to the point where they started trusting me, even advising me on my own life, a clear sign of acceptance.

Perhaps they trusted me because I was Brahmin by origin but taking a stand with them. Or perhaps it was my talent for intimacy. People often confide in me, and I have come to see these confidences as a privilege of my existence. Listening, observing, carrying stories like stones in my pockets and occasionally laying them out in pleasing or puzzling arrangements—these are, I am both ashamed and proud to admit, the only real skills I have.

But I didn’t recognize them as skills then.
I finished the summer feeling that I had done no good at all. My origins in the Brahmin landowning classes and my upbringing in the comfort of Edmonton’s suburbs conspired to make me feel complicit in a global and local order that kept my new friends at the pre­carious edge of existence. And my barely–post-adolescent understanding of the world and of myself was entirely inadequate to help me cope. I was, unbeknownst to me or anyone else, heading for a breakdown.

I was also, that particular weekend, heading for the last intact agraharam in the state.

The festival pays tribute to a particularly ferocious form of Shiva, the god of death. Shiva has myriad other attributes and associations—renewal, renunciation, eros—but death is an especially prominent feature of the festival, which is structured around an escalating series of sacrifices.

The day began with a procession of children bearing pots of milk, the first offering. Fresh from their baths, dressed in new clothes, the children lifted the pots onto their heads. I had been told that the god possessed them in this moment, and a few immediately began to sway and dance, their parents running up to keep the milk from spilling. The children’s eyes rolled back in their heads, and their limbs spasmed. Some kids who were not immediately entranced managed to fake it; others didn’t try, wobbling up to the temple as fast as they could, where, to the frantic accompaniment of musicians, they poured the milk into a giant receptacle at the altar. Their parents then carried them off.

The temple was no more than a shrine in a courtyard, enclosed by a low ceiling of strung flowers, which trapped smoke from the incense, camphor and ghee-fuelled sacrificial fire while releasing the scent of their own slow perishing. At one end, a black-stone statue of the deity, about the size of a toddler but mounted on a dais, was attended by a flutter of priests. A cadre of drummers kept up a suspenseful clatter through which horns mournfully dawdled between the waves of worship, when the music surged with devotional energy toward a histrionic peak. In between each ritual, the dress and expression of the deity were changed, a new face painted on in sandalwood, kohl and vermilion, to reflect the spirit of the moment.

Next to be sacrificed were boiled eggs, hundreds of them, doing nothing to improve the smell. Live chickens next. Then goats. My aunt jostled me to the front of the crowd: She thought that, as the foreign visitor, I deserved pride of place. One man held a struggling goat still as its head was sawn off. The drums h receded and, again, advanced as another goat’s chest was slit and its still-beating heart held aloft.

I’ve heard it’s illegal, actually,” my uncle said, rehashing the day’s events over dinner. Like caste segregation, I thought, glaring at him. The meal was strictly vegetarian, in the way of Tamil Brahmin cuisine since time immemorial. Most of my relatives to this day have never eaten so much as an egg. What were they doing yanking hearts out of goats?

Every system of oppression runs on mutual dependencies, but it would take me years to understand how these manifest in the places I am from. Brahmins ruled the temples, but the gods were not theirs alone: A pantheon of fierce, local, agrarian gods, partially and imperfectly fused with pan-Hindu deities such as Shiva and his wife Parvati, demanded appeasement.

In the moment, though, I didn’t yet know all that. “So why don’t they stop?” I asked my uncle as he relished his rice and lentils.

“They tried,” he said sombrely.

“Once, they didn’t do the sacrifices,” my aunt said.

“First the crops failed,” my uncle continued. “Then the animals started to die, then there was illness among the children. They won’t risk it again.”

That night: the festival’s climax. The village headman, my uncle’s uncle—a man in his 70s—would go to the cremation grounds at midnight, take a piece of bone from one of the village dead and run from there all the way to the agraharam.

I was told that unmarried girls were not allowed to watch this part of the festival, but the prohibition was relaxed for me, as one both of and not of that place. So I was in the temple when he arrived and watched him mount the dais, his eyes wide to the whites, bare chest gleaming, to put the charred human bone between the lips of the deity whose face at that moment revealed all the world-destroying power of the ancient gods. His task completed, the headman collapsed.

My own task had yet even to be revealed, but I collapsed too: The day after the festival, on the eve of my return to Canada, I fell into a cavernous depression, as suddenly as if struck by a hex. It lasted months. It wasn’t black magic, though; it was abject bewilderment. Who was I, and what could I possibly make of all this? The depressions recurred for years, until my late 20s, when I discovered that, in writing, I could work with, play with and start to make some sense of the mysteries of my origins and the abiding collective present.