ELLE First: In search of solitude

Esi Edugyan on her first taste of hakarl in Iceland. 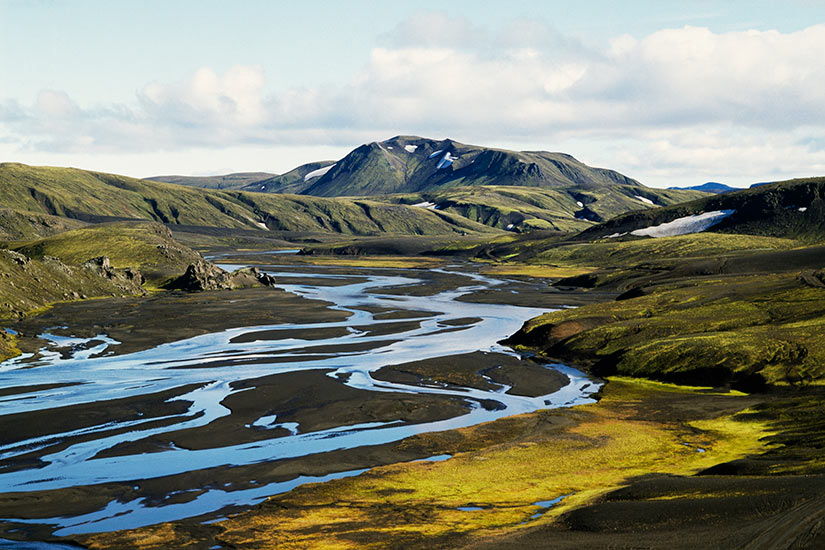 I’d gone to Iceland for the solitude. I’d gone to be alone with my thoughts, to wrestle with a novel that wasn’t finding a shape, to travel alone for the first time and examine the limits of my life in an alien land, surrounded by strangers speaking an alien tongue. That had been the idea, at least. But on my first morning in Reykjavík, under an awning, where Tryggvagata and Geirsgata streets meet, I saw her: a black woman, like me, wandering alone. And she saw me.

I remember watching her head turn, very slowly, on its thin, stalklike neck and seeing her wet eyes blink and fix on mine. I remember that. And then something turned over in my stomach, as, without so much as a glance left or right, she strode out into the street directly toward me. Her face broke out into a grin. “Crazy here, innit?” she called out as she approached, as if in parody of the most English of English tourists.

I glanced around in alarm. She was, indeed, speaking to me.

Her name, ironically, I’d learn, was Hope. Dressed head-to-toe in black, with blond cornrows that knotted at her nape, Hope stood a head taller than me.

A truck rattled past on the wet road. Before I even responded, still standing in the busy, sunlit intersection, Hope launched into a tirade about her rude Israeli roommate back at her hostel. The woman had had the gall, apparently, to ask Hope if she had a boyfriend. “I mean, these people are all in your business, eh? It’s like, I’m a private person, right? And then she has the nerve to turn off the TV and close the blinds when I go to the bathroom, so that I come back and everything’s dark, eh? And when I turn it back on, she has the balls to tell me to turn it back off, she needs to sleep. Can you believe it? Who does she think she is?”

That’s how she spoke – in full Dickensian splendour. It was all “know what I mean, like?” and all “f” instead of “th,” all “I fink, therefore I am.”

“I guess so,” I said with an uneasy smile, when she paused for breath.

And just like that, her expression switched to sly intimacy. “Where you going, luv?” she asked. “The flea market?” She gestured at a large banner slouched on a white building up the road.

“Oh, there’s the market! I was going to the library, actually, but I want to get to the market sometime, to try some hákarl.”

“Never mind that – they’ve got terrific wooden sculptures there.” She nodded. “Anyway, I was at the library yesterday. Nothing but a bunch of bollocks, trashy papers I wouldn’t read.”

I’d started walking again. I told her rather firmly that I was, definitely, on my way to the library.

“Sure, I wouldn’t mind going back to the library,” she said. “Or I could show you around the flea market.”

Her long, thin legs kept an easy pace with mine.

“These Icelanders are terrible, right?” she said, her voice suddenly sharp and high-pitched. Two fair-haired women walked by, studying Hope with curious looks.

“Look at them,” she grimaced. “They stare so much. I mean, what the f— do they think they’re looking at? You know, they’re all really educated now, but there was a time when they were all backward and illiterate, see? But now, they think they know everything about you. Look, look at the way that guy stares. What the f— does he think he’s looking at?”

I stopped walking and studied her.

On and on she talked. Now she was onto her own people: the English.

“Yeah, they’re even worse.” She waved a dismissive hand by her ear. “The English are the most two-faced people in the world. They smile to your face, when beneath they’re only thinking shit about you. They’re awful. Know what I mean, like?”

What could I tell her? I figured I was beginning to.

I told her that she really didn’t have to accompany  me all the way back to the flea market. That I was sure it would prove dull.

She glanced at me sidelong. “No, it’s no problem, like. I’ve got time.”

She looped her arm through mine and pulled me onward. There was no shaking her. When I stopped at a little café, the Kofi Tómasar Frænda, to order a bit of lunch, Hope stopped in with me. When I ordered a slice of vegetarian pizza, Hope ordered the same. When I added a bottle of water, Hope added a bottle of water as well. And, of course, when I sat down in a window seat, Hope folded up her long legs in the seat across from me.

At once she was muttering again. “What is that guy f—ing looking at? I swear, I’m going to break his skull.”

I paused mid-chew, dough balled up in one cheek, and looked at her.

“Sorry,” she said with a laugh and poked at her pizza. “But I speak my mind, right?”

We had no sooner stepped out of the café, back into the street, when the waitress ran out after us. I turned, nervous. I’d been feeling nervous for some time now.

But she was smiling. “You forgot this,” she sang out, handing Hope the pocket calculator she’d used to tally her half of the meal.

Hope looked uneasy and pursed her lips in a thin line. “That was nice of her.” She rubbed her bony wrists and peered over my shoulder at the street. “Yes, that was nice,” she continued. “And here I thought she was running back to complain about the bill. I stiffed her 90 kronur. They charge too much – that pizza’s terrible, innit?”

I don’t know why I didn’t bid her farewell right then. I don’t know what it was – timidity, pity, a fascinated horror. Maybe some combination  of all three. As we walked into the market, I crossed the Kofi Tómasar Frænda off my list of frequentable restaurants.

The market, situated in a dim  cement square, reeked of fish and new rubber and dust and wet wood. Weaving among the narrow aisles, leaning over tables laden with oddities and baked goods, Hope suddenly gripped my sleeve and hissed, “Who does that man over there think he’s staring at? I’m going to f—ing punch his eyes out. I speak my mind.”

I told Hope she was hurting me.

I’d come to the market to try Iceland’s infamous delicacy, hákarl: raw shark that has been buried in the sand and left to ferment and rot for months. When in Rome.

A heavy-set woman with matted black hair and deep-set eyes pointed us toward a booth at the far end of the market. Why she should have been so helpful was beyond me. Hope had just finished asking the price of her woven blankets, only to cut the woman short with an abrupt “I don’t have that kind of money; forget it.”

At the fish counter, I asked for a taste of hákarl. The counterman stood blinking at me from behind his grimed glasses. I gestured at the sign behind his head and mimed eating.

“Ah,” he said, grabbing a container. I studied the tub with a frown.

“Just a taste?” I said. I mimed taking a tiny piece between two fingers.

He grinned. I admired these people so – these people with their quick smiles and their kind, pale eyes. He grabbed a toothpick and speared up a white, wobbly chunk of meat.

Hope leaned in. “What is it?” she asked. And before I could answer, she reached forward and muttered, “Free’s free, innit? Let me have a try.”

He obligingly speared her up a chunk. The very smell of hákarl had a stinging, ammonia bite, as if the fumes were scouring out my nostrils. The counterman had begun to chuckle softly to himself. I glanced over at Hope. She shrugged, silent for once.

The shark tasted, at first, like nothing. A mild, calm whiteness. I felt a firm, gelatinous texture roll over my tongue. And then, all at once, my mouth was filled with the thick mustiness of foul cheese, salted fish and something darker, browner, fouler.

I fought to keep the smile on  my face.

Hope was chewing her own hákarl with a smile, nodding enthusiastically. When she saw my expression, she paused. Something passed behind her eyes, very slowly, like a second lid coming down.

And then her face twisted in outrage. “This tastes like shit!” she screeched. She spat the hákarl onto the cement floor.

Oh, the silence. For two hours, I’d been wanting silence. Two hours. And now, this.

The counterman had reddened, shocked. Eyes were fixed on us from every corner of the market. A woman was pulling her son by the shoulders toward her. I thought if I could only open my mouth wide enough I might be able to eat the embarrassment off my own face.

But Hope, she just leaned in toward me. “What the f—’s she looking at?” she muttered. The smell of her breath was foul, with a thick, repugnant sweetness.

This month’s ELLE First was written by Esi Edugyan, who won the 2011 Giller Prize for her novel Half-Blood Blues.