Elizabeth Renzetti on the first time she tried ayahuasca in the jungles of Ecuador. 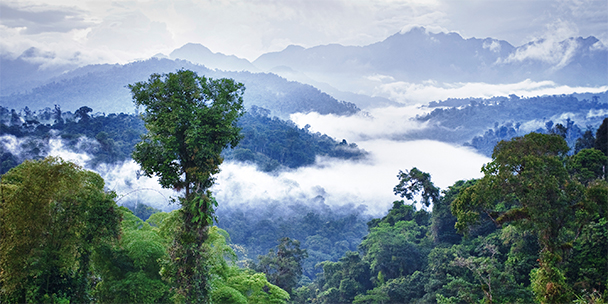 A herd of pale horses galloped past, their manes and tails sparkling with ice crystals. This was odd, considering we were in the middle of the jungle in Ecuador. A crimson lizard formed in the fire and rose in the blackness of the hut, exploding in a brilliant shower of light.

All I heard was the fire crackling, the shaman chanting and, close by, desperate retching. It was Klaus, the kindly and aged German bat expert I’d recently met, heaving the contents of his stomach into the ferns. I’d done this to him. To both of us. I had brought us to the hallucinogenic drug ayahuasca, and at that moment it felt as if there were no way back.

A week earlier I’d never heard of ayahuasca. It was spring 1996 and the beginning of a four-month trip across South America with three friends. In the dark ages, before the Internet’s total dominance, it was still possible to retain pockets of ignorance — say, about a mind-blowing drug that would throw open “the doors of perception,” as Aldous Huxley once said about mescaline, but might also cause you to poop your pants and weep bitter tears about the futility of your life.

But I’m getting ahead of myself. At that time, ayahuasca was not the party starter it later became in fashionable homes and yurts across North America. Sting had not spoken about how the trippy brew connected him “to the godhead,” and men’s magazines had not yet sent their boy reporters to the Amazon to get their freak on.

And Neal, our Canadian guide in Quito, was so persuasive. A friend of a friend, he had taken ayahuasca and had seen things, man. There had been some kind of ecstatic encounter with a white dolphin. Neal knew a family of Quechuan healers who — with the incentive of greenbacks and the fact that we were doing a short film on the experience for the CBC show Big Life — might be persuaded to take us on a drug-induced journey.

We sat in an apartment in Quito — four Canadian women with nothing on the agenda but adventure — and listened as Neal leaned in close: “A crucial part of the rit-ual involves the shaman sucking your head.”

Head sucking and hallucinogens: Show me a woman who would turn down that adventure and I’ll show you a woman who is only half alive — or very wise. Three days later, we drove six hours south of Quito, left Neal’s Jeep where the road ended and then hiked an hour into the jungle. There, we were greeted by three generations of the shaman’s family.

The women offered us silent smiles and tended to happy, shrieking children while the shaman sat, tiny and uninterested, as his eldest son talked about the spirit animals from his ayahuasca visions: an anaconda and a jaguar. Why, I wondered, does no one have a rat or potato bug for a spirit animal?

READ MORE: On the road to motherhood: A false glow

The next day, we set off with the shaman’s son to search the jungle for the plants that would be combined to make the ayahuasca tea. As we passed one vine, whose scientific name is Banisteriopsis caapi, he stopped to tug it free. “It’s called ‘the vine of life,’” Neal said helpfully. “Or possibly ‘vine of death.’”

As we continued our search, the shaman’s son explained ayahuasca’s role in his culture. “It’s used to communicate with our spirit advisers, to find hunting grounds and to better understand the forest,” he said. Later, I would read about Western supplicants who took ayahuasca to heal their pain: depression, anxiety and the modern malaise that has no name — having too much and feeling like it’s never enough.

The tea brewed. The four of us stewed. Increasingly, it seemed like a bad idea. The night before, while we were all dancing under the stars, the shaman had brazenly tried to grope each of us in turn. I slapped his hand away, like a virgin in a Victorian melodrama. Now, we would spend the evening having our minds blown and heads sucked by the little man who’d been sitting under a tree all day, pounding back the bottle of rum we’d brought as a gift. It seemed less than spiritual.

We decided to enlist Klaus as our protector. A retired German Air Force officer, Klaus spent his days crawling naked through caves in search of some obscure Ecuadorean bat. It was his bad fortune to end up staying in the same jungle hut as us. “Take ayahuasca with us tonight, Klaus,” we begged. He refused. Did I mention he was German? He liked his head the way it was. Finally, after much badgering, he relented.

As night fell, we walked to the hut where the ceremony would be held. My three friends and I had stuffed the breast pockets of our jean jackets with flashlights, to prevent further groping. As I sat by the fire, I felt increasingly claustrophobic: What if the trip went out of control? Taking hallucinogenic drugs reluctantly is always a bad idea. It’s like trying to drive with the parking brake on.

READ MORE: Tales from an adventuress

The jungle pressed in on all sides. The shaman handed me the cup. If you’ve had coffee made with kitty litter, you have a good idea of what ayahuasca tastes like. I washed it back with a swig of rum. The cup went around the circle. The shaman, clad only in a pair of jogging shorts and a feathered headdress, began to chant and moan. In one hand, he held a giant palm frond.

He beckoned me over, shaking the frond over my head while reaching for my breasts with the other hand. I smacked him away again, but my hand seemed 40 feet from my body. It took only a few minutes for my head to feel like it was riding an elevator to the stars. The dark hut was suddenly as large as a football stadium. I felt the shaman’s mouth on the top of my head — this must be the head sucking, I thought. The last rational part of my brain worried about the abundance of toxic DEET in my hair. He might be a groper, but I didn’t want him dead.

Somehow, I crawled back to my seat near the fire and someone else took my place at the shaman’s feet. Time compressed and expanded and ceased to have meaning. I could hear poor Klaus retching and another friend throwing up the mini Snickers bar I’d given her…when? That day? The week before? Time moved in all directions, like a fog.

Guilt, however, had a form. This was the shape my trip took. (Later, reading about ayahuasca ex-periences, I would realize that this abject plumbing of depths wasn’t uncommon.) All of my character flaws were spread before me, like buildings on a skyline, each one distinct and glowing. I was selfish, thoughtless, a coward. Hadn’t I dragged poor Klaus into this mess? Hadn’t I run away to South America rather than face the ruins of a crumbling relationship? I was paralyzed with horror at all the things I’d failed to do.

In Canada, I’d left behind a dearly loved aunt who was living with cancer. Though I squeezed my eyes shut against the vision, I could h see the cancer trying to consume her. Why had I left her behind? The visions rolled on, clawing and relentless. I resolved to see a shrink if I ever escaped this godforsaken jungle.

Now, this was not my first time at the psychedelic rodeo. I’d taken acid and mushrooms, but nothing prepared me for the intensity of the visions I had that night. Just when it seemed like I could take no more, the landscape shifted from a nightmare to a dream, and the pale horses galloped past. I was on a mountaintop with them, flying through the night sky as I clutched their icy tails, and everything seemed possible.

Hours later, we finally staggered from the hut. I avoided Klaus’ eyes, sure that he wanted to kill me, but his gaze was fixed inward — dreamily, it seemed. Perhaps he had communed with his bats.

“When used properly, drugs are a gift of expansion.” Who said that? Oh, it was me. That’s a line from my debut novel, Based on a True Story, in which the main character, Augusta Price, has an ayahuasca experience similar to mine. (Although something unsettling happens to her that night, and nothing permanently horrible happened to me — apart from the vile aftertaste of the drug itself.)

Augusta isn’t ready for the experience, and it rocks her to the core. The drug allows her to lift her armour, for once, and see the unmentionable underneath. For me, the ayahuasca offered a glimpse of the elaborate defences I’d constructed to guard myself against failure and a sense of how flimsy, how meaningless, they were.

The morning after her ayahuasca experience, Augusta finds herself drinking coffee with two Corsican gangsters. My friends and I sprawled on the grass, still dizzy, while the shaman’s son interpreted the visions his father had seen for all of us.

But as I sat there, watching the electric-blue butterflies dart through the air, I realized that the only interpretation that mattered was mine. Why was I so afraid of failure? Why had I constructed this wall of false bravura — the skyline I’d seen — around myself? Why was I so hard on myself? (Almost 20 years later, I’m still struggling with that one.)

The shaman’s son stood up. It was time to hike out of the jungle. We would return, he said, and take ayahuasca again and learn more about ourselves. But I never went back, and I never took another trip, except in fiction. It was safer that way.

Each month, we ask a Canadian writer to share a story about a significant “first” in his or her life. This essay is from Elizabeth Renzetti, whose debut novel, Based on a True Story, was released in June 2014.

READ MORE:
Editors’ guide to a stylish and sane wedding
On the road to motherhood: A walk to remember
ADVENTURE QUIZ: Are you a Style Trekker, an OTT Warrior or a New Glamazon?