Heather O’Neill on the first time she was published. 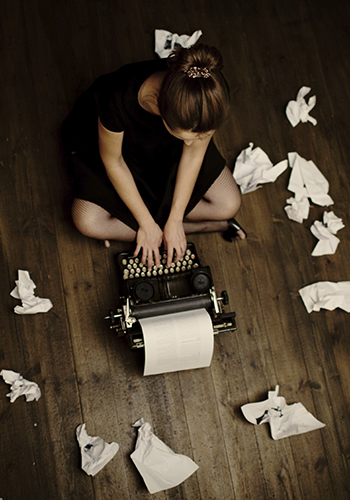 In 1983, I was living on the third floor of a building in a tiny apartment with my dad and my two sisters. My mother had left us with my dad, who was lower class and worked odd jobs, to raise us on his own. When I went to play with other kids, I saw that they were better dressed than I was and had much bigger homes. I was vaguely becoming aware of class issues, although I certainly couldn’t articulate them.

Back then, I considered myself a very ordinary kid who wore snow pants with patches and a toque with the emblem of the Montreal Canadiens on it and who hurried home to watch The Muppet Show on time.

Then one day in Grade 5, the teacher asked us to write a short story. I loved reading, so it seemed momentous, like I was engaging in something of great import. I worked on it every day for a week, crumpling up sheets of paper neurotically as I started it over and over again, convinced that it was terrible.

Because I was working so hard at it and feeling so miserable about it, I assumed this meant that the story was really bad. But the day after I handed it in, the teacher told me that it was excellent. I couldn’t believe that I had done something worthy of praise. It seemed so unlike me.

I figured that I was just a scruffy kid who never did anything special and was meant to live in the background and just get by while the kids from better families stood out. And then, two months later, the teacher told me that my story had been selected for the school board’s city-wide magazine. What an honour that was! When I went home that day, my family treated me as if I had won the Nobel Prize.

It was the first time I’d ever been published. What was the story about? I don’t have the magazine anymore, but what I remember about the plot is that I shrank one day and encountered a cockroach. If I had written it lately, I would say that Frank Kafla’s The Metamorphosis was an influence.

But back then, real cockroaches were a terrible preoccupation for me. You could not turn on the kitchen light in our apartment at night without seeing at least one scurrying across the counter. What would that story be like if I were to write it today with the same basic premise? I’ll give it a shot.

One morning I was standing in the kitchen, when, to my horror, I found that I’d mysteriously shrunk. I tried to yell up for my family to help me, but they mistook me for a bug and tried to stomp on me. Terrified, I fled into a crack in the wall.

As I wandered around behind the wall, I saw a strange creature. It took me several seconds to discern that it was a cockroach. He was sitting on a chair that he had fashioned out of a bottle cap. His head was leaning back. He had made himself a tiny skin-tight suit out of a piece of newspaper. He had a rubber band wrapped around his waist, functioning as a corset, which made him much skinnier than he actually was.

“I don’t think so,” I responded. “You are plainly a cockroach.”

“So I am,” sighed the roach. “The only one around here too. That exterminator’s last visit really did the job, you know. There were bodies everywhere. I’m terrified to go out there. Initially, I thought that I would disguise myself as a cricket in order to escape this building. I wanted to get out of the city. Nobody crushes crickets. Perhaps a child would put me in a jar with holes in the lid and it would be like living in a penthouse. I even made myself a violin.”

The cockroach held up his singular creation for me to see. He had made himself a tiny violin out of a matchbox and some electrical wire. He had a safety pin with dental floss wrapped around it as a bow.

“I headed out across the sidewalk, but then I thought, ‘Who I am kidding — me in the country?’ I like cities. I like fast-food restaurants and downtown. It’s true. The city is, in part, who I am. Wherever there is squalor or disorder, fellows like me thrive. I am a metaphor, my dear friend.”

“Why are you still in disguise?”

“Well, the one thing that has come out of this whole subterfuge is that I found out I quite like playing the violin. I’m really focusing on my art now. What can you do in the face of overwhelming tragedy except try to comprehend it through art?”

He played a tune. It was more complicated than the ditties that crickets usually play. He wasn’t born with any ability; he really laboured over it. He had to compose much more interesting scores in order to make up for the fact that he hadn’t come by it naturally.

And whereas a cricket’s tune puts one in mind of open fields and lakes, the cockroach’s tune captured within its notes the hollow sounds of pipes at night, the noises of television shows playing through the wall, the scurrying that takes place after the sudden and unexpected turning on of an electric light.

It illuminated a world that had neither sun nor mood but was lit by the faint glow of the streetlights outside and the occasional pulse of lights from a marquee. It captured the trick of daintily leaning off the faucet for a sip of water. He had turned his ugly life into something funny and picaresque and sympathetic.

For a brief moment, I felt for the plight of cockroaches, whereas hitherto I had wanted nothing more than to squash them. The ability to brand yourself as unique when everybody else in the whole world thinks that you are nothing but problematic statistic is a beautiful thing. This was a cockroach that was giving a voice to those who had fallen through the cracks.

The original story ended with me going back to my previous size. Children’s stories so often resort to the deus ex machina effect! But sometime later along the line, I, like the cockroach, decided that it didn’t matter where in the social hierarchy I had been born; I would play the songs the crickets play. I decided when I was very young that I would be a writer and that I would sing songs about my own childhood. I would write about the people who had lived in the buildings where I grew up and faced.

And although it might sound clunky and the subject matter might be odd and I would often hit a false note and sometimes what I said might be incredibly jarring, I would express myself until my tiny voice might be heard.

Each month, we ask a Canadian writer to share a story about a significant “first” in his or her life. This essay is from Heather O’Neill, whose second novel, The Girl Who Was Saturday Night, is out now.

READ MORE:
ELLE First: Angie Abdou on her first attempt at an intervention
Career: A crisis of confidence
Career: How to overcome imposter syndrome