Emma Hooper on her first job in a freak show. 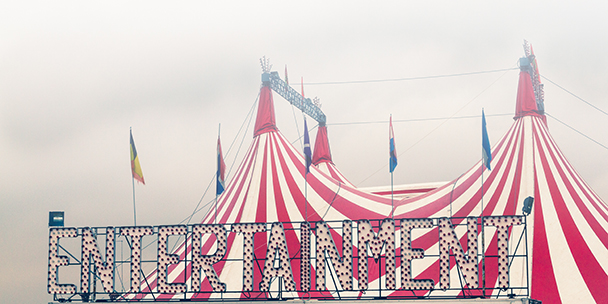 “Show me your body.”

“No, your real body”

My first job wasn’t in a sticky-hot restaurant kitchen washing dishes or out in the beautiful and terrifying woods planting trees or behind a counter blipping bar codes like most of my high-school friends. It was in the shadow and shelter of a hot and close vinyl tent at a summer festival – in a freak show.

My first job was being a freak.

“Who did this to you?” a woman asked, worrying the top of her mini doughnuts bag.

“But it’s horrible,” she said. “Isn’t it…? I mean, at least a bit horrible, and sad for you? Isn’t it?” She avoided eye contact, instead flicking her glance back and forth between my skinny 15-year-old bodyguard and my furry black football-size abdomen.

Every summer, from the time I was 14 until I moved away from Edmonton to England 10 years later, I worked a summer job as the freak in a real, live freak show. Over the years, I was the Man-Eating Plant, the Alien in a Jar, the Mermaid in a Bottle, the Headless Body, the Bodyless Head and, that first year, Spidora the Spider Lady: half-woman, half-spider.

School, and public places in general, had always been pretty hard for me. In Grade 1, I used to hide in a storage cupboard so that I could eat my lunch alone and not get lost or trampled or, worse, noticed by the hordes of other kids.

Eventually the teacher noticed crumbs among the spare pencils and told my parents. My parents asked me if it was true. I said it was. They asked me why. “Because it’s scary out there,” I replied. So my parents put me in drama lessons.

A few years later, a magician named Ron Pearson asked the drama department if they had any students looking for jobs. He was both a brilliant illusionist and kinder than a TV dad; his own kids went to the school, so he knew it was a good one. Sure, said the school, there’s at least one….

Unfortunately for both Ron and the punters who paid to see me in his “Ghostwriter Theater” tent, I’m not actually 50-percent spider. As far as I know, I’m 0-percent spider. The show was based on a clever and ancient illusion, the secret to which I’ve sworn (and am contracted) to never reveal.

The money-making formula was just as ancient. Outside the tent was a caller, often the then teenage magician Billy Kidd, who would use a bullhorn to shout at passersby “THIS IS THE MOST TERRIFYING THING YOU WILL EVER LAY EYES UPON!” or “SHE WILL CHANGE YOUR LIFE!” or “IT WON’T BE EASY, BUT IT WILL BE WORTH IT. SEE WHAT THEY DON’T WANT YOU TO SEE!” until someone stopped and paid a dollar.

The passerby would then be led into the tent, and, once inside, he or she would see, straight ahead and a bit above on a large web, my spotty teenage head attached to a small black spider abdomen with eight long black legs extending from it. You could see over and under and around and behind the web, and there was no human body — just my human face and the rest of my spider self.

It wasn’t that I was especially unhappy with my body. Not any more than usual, anyway. Growing up is difficult for everyone. Awkward things keep happening, one after the other, to this flesh that is meant to be your own, meant to be you. I would look at the gentle roll of my stomach or the wrinkle lines on my hands or the light hairs on my breasts and think “Is this normal? Is this? Is this?” Women in magazines had none of these things.

And, of course, you can’t just ask your friends and risk revealing to the dangerous wild-west world of school that, actually, you are weird. You are a freak.

A whole lot of people believed it. “Are you real?” they would ask.

“But are you really real?” they would ask.

A whole lot of people wanted to believe it.

“I don’t find you disgusting.”

All in all, there were four of us running the show at any given time: one freak, one bodyguard (always wearing a lab coat), one caller and one money taker. It was the four of us versus the world of punters, who would become progressively drunker as the evenings pulled in.

“What time do you get off?”

“I could just jump over this rope, you know.”

Sometimes I would sing. Once you’re the Spider Lady, already a confirmed aberration, singing in public isn’t so scary. I got the kids to sing along to “Itsy Bitsy Spider” and the adults to “I Want to Hold Your Hand[s].”

There was another Spider Lady, on another shift, who would get people to buy doughnuts for her. The mini-doughnut van was just a couple stalls from us, so she would say “Go get me a snack!” and I would ask “Sing with me?” and people would – they always would.

READ MORE: ELLE First: Heather O’Neill on the first time she was published

The crowds were generally nice – generally happy and laughing and friendly. But even when they weren’t – even when it was 10:45 p.m., 15 minutes to shift’s end, and a group of loud and drunk young men were convinced they couldn’t leave until they got to touch you or find out how things worked or both – even then it was never scary. Not really.

We had our little family, and we watched out for one another. We stood up for one another. The bouncer-doctor, scrawny in a too-big lab coat, would say “Hey, guys, leave her alone,” and I’d say “Okay, guys, listen to the doctor” and they would. Just like that. It was never scary.

After all, what’s the worst that could happen? They’d find out I was normal. Me, the doctor, the caller, the money taker, the rowdy lads themselves – all of us, all along, just normal.

But…don’t you get bored?”

“But…what do you do up there all day?”

Each month, we ask a Canadian writer to share a story about a significant “first” in his or her life. This essay is from Emma Hooper, whose debut novel, Etta and Otto and Russell and James is out now.