What's the sex appeal behind a dirty man? ELLE finds out! 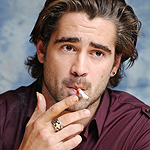 During a recent conversation with girlfriends, I revealed that I like “dirty” men. Not dirty as in hygienically challenged or having too many notches on the bedpost, but dirty in the sense of actual dirt. I like a man who works hard all day and has the sweat on his brow to prove it. That and mud on his clothes sends me into a tizzy. I’m talking Aragorn from Lord of the Rings, saving-the-world style dirty. Hot? I think so.

Hear me out: Take Kate Hudson, for example. She was married to Chris Robinson (of the ’70s-esque rock band, The Black Crowes), and there is no question that he isn’t exactly well-kempt. After that, she moved on to Owen Wilson who looks as though he’s perpetually just rolling out of bed. I admit it, I love that disheveled look about him; judging by his legions of female fans, I’m not alone.

People magazine’s annual poll of the world’s sexiest men is one of the magazines best-selling issues. Albeit a few boy-next-door celebs make the list such as Ben Affleck, Adam Brody, and Patrick Dempsey — it’s mostly full of those grungy, oh-so-ambivalent stars like Colin Farrell, Wentworth Miller, and Rodrigo Santoro that scream masculinity with their flannel shirt ease that makes us swoon.

And of course there are the obvious ones like Johnny Depp — he’s super sexy even when playing a dirty pirate; Brad Pitt with his shaggy hair and beard circa his 1994 Rolling Stones cover or as Tristan in Legends of the Fall, and, as previously mentioned, Viggo Mortenson as Aragorn. All of these delectable men are delightfully dirty from a hard day of wrestling sea monsters, grizzly bears or orks. There’s no time to shower and shave when there’s a battle to be fought!

What’s big attraction to dirty men? Find out on the next page …

Do you like bad boys? Take our quiz and find out!So what’s the attraction? Why do women like it dirty? For me, it basically comes down to a man looking like a man. Sure, it’s a bit archaic, but I like a manly, rough and tumble guy who doesn’t spend more time primping than I do, and frankly, isn’t prettier than me. And, when a man is sweaty and dirty, typically it’s because he’s hard-working or hard-playing, or even better, both. I like a man who works his body for a purpose. Admit it; you like checking out that guy who delivers your new sofa or the guy who’s just finished landscaping your yard. They didn’t get their muscles standing in front of a weight-room mirror, pumping iron and admiring themselves. No, these fellows genuinely work hard for their hard bodies.

Now all of this is not to say I’m opposed to guys cleaning up nice, but there’s just something seductive about a guy who looks a bit untamed. Take your typical suit-guy. You can’t argue with the fact that he’s oh-so-much sexier when you catch him looking kind of scruffy — sporting an old t-shirt, tattered jeans and a week’s worth of facial hair.

My husband, for example, used to keep his hair short and shave frequently. Last summer, he bought a Harley, and since then, he’s been growing his hair and shaving rarely. Now, when he comes home from the construction site with his five o’clock shadow, hockey hair and dirty clothes, I get weak in the knees. (It’s important to note that amidst all this dirt, a man can never stink. That kills any sort of sexy vibe.)

At the end of the day, women like men who aren’t afraid to roll up their sleeves and get their hands dirty. In fact, I prefer it. Yum.

Read more:
Do you like bad boys? Take our quiz and find out!
8 simple rules for the first date
7 signs he’s a keeper