Dating and text messaging: The advent of the “textlationship” 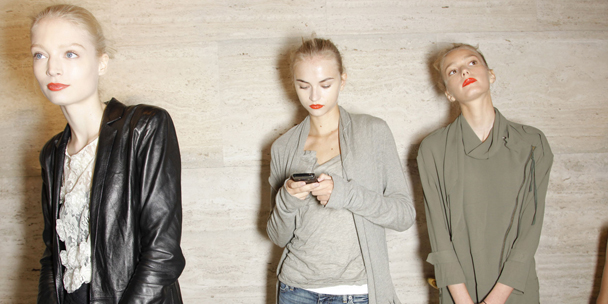 If you plan on dating in this day and age, you better make sure you have an unlimited texting plan. A recent study conducted by AT&T surveyed text messaging adults aged 18-55, and it showed that 40% of people felt that text messaging played a large part in their relationships. Of the people surveyed, 67% admitted to having used
text messaging to express feelings of love. Technology has made it possible for us to flirt, get to know each other and even break up from behind the protection of our smart-phone screen, making the days when you’d speak to your lover on the phone seem almost quaint. However, is all this instantaneous communication actually hurting our chances at love?

Our culture’s obsession with text messaging has lead to a new trend in dating: the
“Textlationship” – a dating interaction that is built entirely on high-tech communication and often never materializes beyond the texting stage. Carlos* defines the textlationship as “a relationship that begins and ends entirely on your phone.” He says that he’s been encountering this scenario on a regular basis. “The only time you see each other’s face is during the actual number exchange and then your cell phone provider takes care of the rest. You text and text with the promise of seeing each other but it never happens. You just keep texting.” Carlos says that textlationships are a huge turn-off. He prefers to exchange a few texts, then a phone call before setting a time to meet up. “If a girl calls me immediately, it tells me she is confident and she isn’t afraid of having a live conversation.”

Is a relationship via text messaging a sign of the times, do these textlationships equal intimacy, and when is texting appropriate? Find out all the answers on the next page…

Is the “textlationship” is merely a sign of the times?

We’re constantly bombarded with social media and new technology that encourages us to connect frequently with as many people as possible. The flip side to this is that in some ways we are becoming less social. These tools allow people to interact without ever having to leave their comfort zone. When it comes to
dating and relationships, it’s the risk-taking that makes things sexy. The eye contact, the awkward pauses – it’s all part of the romantic leap of faith that people take when they get together. Remove that real life interaction and replace it with a smart-phone screen and you get a whole lot of inertia.

Sandra* feels that the concept of the textlationship is directly linked to the popularity of online dating. For Sandra, textlationships occur when she has met the person online and there is no previous real life context for the relationship. Texting and online interactions provide people with confidence that may be lacking in real life. Texting allows people to flirt with ease, giving them the time to carefully compose cute, witty replies. But, being comfortable with your textuality can only take you so far. When there seems to be no end in sight for the excessive texting, Sandra concludes that: “the person just doesn’t have the guts to ask me out on a proper date.”

Textlationships do not equal intimacy

As Sexologist and relationship expert Ava Cadell, Ph.D. concludes: “You need to be 100 percent present to achieve a high level of intimacy.” The ability to send photos, videos and love notes by text can create a false sense of intimacy that is no substitute for the real thing. However, sometimes intimacy is exactly what people are trying to avoid with Textlationships. Alana* met Alex at a local bar. After a steamy one-night fling, she gave him her phone number never expecting to hear from him again. To her surprise, this lead to hours and hours of back-and-forth texting that went on for days. She says: “We never really learned anything about each other. The texts were an opportunity to reminisce about our night together and fantasize about the next time we would meet.” When they met up for round two, the sex was great but Alana says she grew uncomfortable when Alex started to show her photos of his parents and relatives. “I liked the state of our textlationship, I liked the freedom we had and the lack of emotional attachment, I’ll never get hurt. We continue to text and imagine scenarios when we’ll be in the same city again. Whether I’ll act next time he’s in town – I don’t know.”

When keeping things textual is a good thing

Melanie says that sometimes the lack of intimacy afforded by textlationships actually works in her favor. She recalls texting a guy she met online. During one of their frequent text exchanges, she says: “He made a very racist, derogatory remark. When I decided to end all communication, he started sending me angry, scary messages.” Sometimes texts are just enough to show
someone’s true colors. She considers the fact that they never made it past the texting stage to meeting in real life, a huge bullet dodged.


Is social media destroying your relationship?