This fashion communications executive answers your most pressing questions about work and social media. 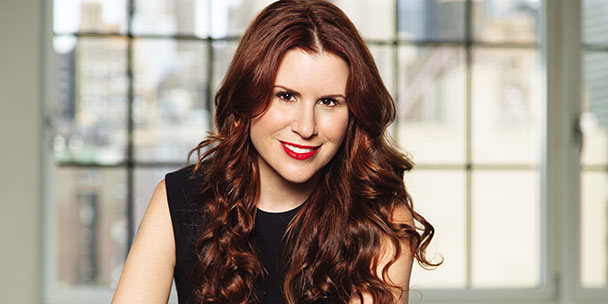 As @DKNYPRgirl, this Donna Karan comms exec was one of the first to mix business and social media, and found they go together like Cara Delevingne and bacon. But what happens when it goes bad? The author of new career-advice tome Leave Your Mark brings her social-media davvy to a few scenarios that take more than 140 characters to unravel.

Q: My boss’ son, who I’ve never met, has suddenly started following me on Insta. It gets weirder: He’s gone on a “liking” spree of all my photos from my recent trip to the Dominican…or at least the ones where I’m in a bikini. What does this all mean? Should I bring it up with my boss?

A: Do you like your job? If the answer is yes, make like Elsa and LET IT GO. Last time I checked, likes didn’t hurt anyone. That said, if his admiration for you escalates to a place where you are really uncomfortable, you could always block him or make your account private. Just remember, your boss will never pick you over his son. Only fight the battles you can win.

Q: I recently posted an Instagram of a few of my work buddies and I at the Christmas party, all very innocent. But now, two of those buddies have started a long conversation in the comments about some hijinks they got up to post-official work event. Worse still, before I could delete their comments, our supervisor commented “You should really make your account private, Jane.”HELP!

A: While your boss’ comment even hurt me reading it, your buddies’ comments are really a reflection of them, not you. That being said, it’s interesting to see (sorry) how their comments led to her comment. Though she has a point, which is TMI, I still believe each person is responsible for his or her own actions. That said, even though it’s not your fault, you should acknowledge her comment by emailing her to apologize for the indiscretion she stumbled upon. But, lesson learned- she is watching.

Q: I’m ready to upgrade my Twitter profile picture from the generic “egg”, but I’m not sure what to replace it with. Any suggestions?

A: I am so glad you’re not an egg. I hate talking to eggs on Twitter. How about something really creative like a fabulous picture of you?! Sometimes the answer is just plain, old simple. If you don’t want to feature yourself, then think about the image you are trying to portray and marry the photo to that.

Q: A gentleman I like just started following me on Twitter, and I followed him back (that’s just good manners, right?). Now what? Did I mention he works in the next cubicle over?

A: You didn’t mention, but I’m a good guesser. A) Remember that anything you say is PUBLIC. B) Even if you send DM’s (direct messages) to one another, one of you will mess up and go public by accident. C) Following each other will give you insight into each other’s lives. You’ll feel closer without even having to have a conversation online….then have one IRL.

Q: I think I might have accidentally got myself into a Twitter war…on our official company Twitter account! We’re a pet food company, and I tweeted a joke about cats, some dog lover replied back with what I thought was a playful jab, I responded in kind, and then things just got serious, really fast. How do I back out of this? More importantly, how do I not lose my job? We’re encouraged to be playful and interactive with our social media followers, but this may have gone too far.

A: The first thing you should do is own it and apologize openly and sincerely to that person for crossing the line. Then leave it. People will jump in to the conversation, but you need to really assess if they should be responded to or not. Look at who is commenting and determine that based on their timeline. Sometimes you might find that these people pick fights as a hobby. You might still get some heat for the comment, but it will die down. Next, send an apology to your boss. Everyone knows that it’s easy to make a quick, detrimental mistake online, so going forward really consider the meaning of your words and how they can be misconstrued depending on whom the reader is.

READ MORE:
My first job was working at a freak show
How NOT to stage an intervention