Canadian pop stars taught me how to love

Writer Anne T. Donahue learned to unbottle her feelings with a little help from Celine Dion and Drake. 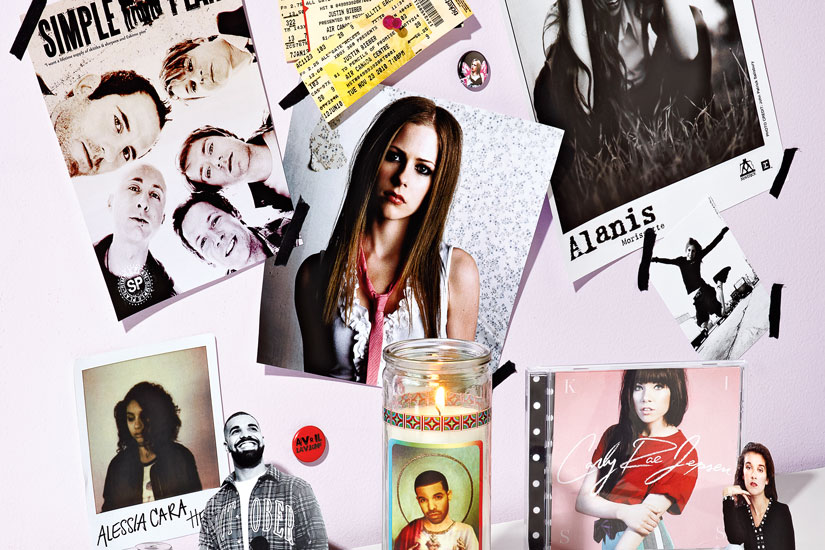 Everything I learned about love, I learned from Celine Dion. Or at least that’s how I justify having once made a mixtape consisting only of “My Heart Will Go On.”

To me, a hyper-sentimental child of the ’90s, Celine was a symbol of grown-ass womanhood. She was passionate and dramatic, and she sang about a type of love I had never actually seen (but that soap operas promise exists): sublime, all-encompassing affairs that necessitate proper dressing gowns and ornate vanity stands covered with perfume bottles and fancy hairbrushes. She’d mask her sexual lyrics with the premise of romance, making her songs ideal middle-school-dance fodder and the soundtrack to my loop of fantasies in which Leonardo DiCaprio would realize I was the woman of his dreams and we’d chastely kiss.

And then I grew up.

As my Titanic fever broke and high school became a crash course in rejection, Celine and her music became less relationship goals and more a reminder of how outdated vulnerability was. While the Canadian icon had once represented the woman I wanted to be, now her impassioned persona opposed the apathy I was trying so hard to embrace. She was a diva, a presence who demanded attention—traits that, to me, seemed like proof that Canada couldn’t offer anything restrained or aloof or, by extension, cool.

Celine wasn’t the sole target of my teenage disdain for anything made in Canada. The older I got, the easier it was to be resentful and cynical than to feel anything at all. Shania Twain’s cheery Y2K brand of empowerment was too country camp for me, while acts like Avril Lavigne and Simple Plan capitalized on the anti-Establishment skate and punk culture that my friends and I considered sacred. Even my favourite indie bands like Broken Social Scene, Arcade Fire and Metric, who came up in the early 2000s and sang about loneliness and suburban ennui, couldn’t help me access my heavily guarded feelings vault. They became a symbol of my inclination to keep the things I loved at a distance. Sure, I may have been starting to understand how relevant our country was artistically, but I certainly wasn’t ready to share. And, as someone whose identity hinged almost exclusively on what music I listened to (and how interesting that made me), I didn’t want to celebrate acts I loved or acknowledge how they formed Canada’s cultural tapestry. I wanted to bundle them up and keep them for myself while taking credit for loving them first.

This also ran parallel to where I was emotionally. Where my early-high-school years were wrought with emotions as dramatic as Celine’s highest note, young adulthood taught me that self-preservation relied on suppressing my feelings. Allowing myself to open up meant doomed crushes, bad professional choices and near financial ruin. As I began to unpack this cause and effect in my late 20s with the help of a therapist, they became a telling reminder of who I used to be. And though I had long unglued myself from the notion that I could define my identity through pop culture, I still vowed to keep my emotions at a distance to avoid being human.

In recent years, Canada has produced an abundance of artists who express their feelings freely, unabashedly and beautifully. Drake has built an empire on his capacity for feels, and The Weeknd uses his music to tout his flaws, while Carly Rae Jepsen’s vulnerability has made even the poppiest love songs seem full of depth and longing. At the same time, Alessia Cara sings about the realities of introversion, and Justin Bieber’s music has become an outlet for his personal rebellion. Then, in the summer of 2016, my true love Celine returned, out and about at Haute Couture Fashion Week in Paris wearing a Vetements hoodie that proudly honoured her Titanic past and grandly acknowledged the blissful sentimentality that has always defined her.

It wasn’t necessarily cool; nor was it the gateway to a secret universe that could totally be mine. No, this time it just seemed powerful.

To express yourself is brave, but to  express yourself with  complete abandon is  braver. And while I  spent years stifling my  own feelings and priding myself on my ability to do so, Canadian  pop artists did the opposite. By showing us  the messier versions of themselves, they sent  the message that humanness is something to be celebrated and that being alive isn’t about having it all figured out.

A person is a multitude of dimensions based on a lifetime of experiences. Where love to Celine is being someone’s loyal lady, to Carly Rae it’s being swept away by emotion. Justin’s revenge is revealing that his mother never liked you, while Alanis Morissette reminds us that anger anthems transcend time and space. And sometimes we’re all just a little petty like Aubrey Graham.

Even though I’m still not a woman who wears her feelings where everybody can see them, thanks to my favourite Canadian artists I’ve been able to acknowledge that it’s okay for them to exist. Or, at the very least, that they can be as varying and as deep as those of the Canadians who populate the Top 40. Vanity with fancy hairbrushes optional.