A different ball game: How baseball connects this father with his sons

One writer reflects on the meaning of playing ball with his twin sons. 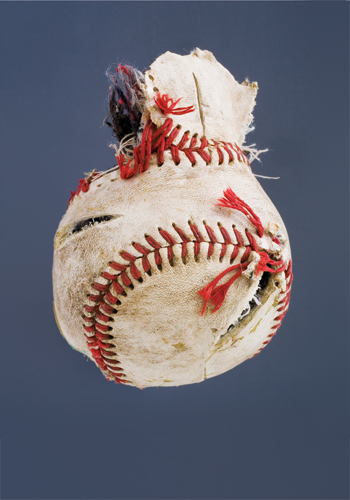 I suppose it’s too much to expect that three months of summer perfection will make up for the drudgery and cold of the other nine, yet the word itself promises paradise. Say “summer” slowly and you will hear the soft, warm breezes of June, the mantra-like om of July and the final buzz of August cicadas. As an adult, I may not be able to grab the papers off my desk, run out into the parking lot screaming and fling them into the air with abandon (although I have been known to wear
sandals to the office—with a spiffy Dries Van Noten cotton suit, mind you). But, lately, I do find my right hand slipping off the mouse to handle the grass-stained suede sphere sitting by my computer: a baseball.

I know that conflating baseball with summer verges on triteness, but, please understand, I’m not one of those men who can keep a scorecard or spew out the batting order of the 1955 Brooklyn Dodgers. I never even played Little League. But the skein of the game has woven itself into the fabric of my
summers. The last time I saw my father alive, we played a simple game of catch—something we never did when I was a child. He was a difficult man, my father. He drank and had a violent streak. Our life together was hard. And that tossed ball was probably the only thing that ever travelled easily between us. The rhythm of throwing and catching nearly made the silence all right. He died in 2001, and from then on I anticipated the days when I would play catch with my own sons. We would feel the moisture rising from the grass. There would be the pop of leather. Under a happy sun, my boys and I would leave nothing unsaid.

And that dream has come true. My wife, Melissa, and I have eight-year-old twins, Jack and Emmet. Last year, we started playing catch with hardballs and thrift-store gloves. The boys learned to keep their eye on the ball and catch in the pocket, not in the palm. It was a perfect introduction to the sport, except for one hitch: Emmet throws like a girl.

I know this observation is laced with inexcusable misogyny. I cringe at the base, unsophisticated expression. But when I watch Emmet throw a baseball, it pains me. I can’t help it. I see the tentativeness, that distinct dropped-arm windup and feeble toss, his elbow never rising above the height of his chest and failing to generate enough energy to send the ball into flight with any authority. Perhaps an anthropologist would say that females “throw like girls” intuitively to protect their chest. Maybe that’s what compelled the mythic Amazons to cut off their left breast. On an evolutionary, survival-of-the-fittest level, it could make perfect sense. For a girl.

But Emmet is a boy, and his feeble throw will draw unwanted attention. It will make him a target. Physical prowess flexed through sport or, if need be, fisticuffs can shelter a boy—and Emmet may not have any. I’ll always love the kid, but his inability scares me. I don’t want him to be the boy who has to promise himself “it gets better” in front of a stupid webcam.

Jack, however, has no such problems. The first time I told him to throw the ball, he gripped it with his pudgy fingers, which remind me so much of my father’s. (His hands were always hot,
dry and thick-skinned, just like Jack’s.) The boy leaned into the toss; the ball flew on a wire, stinging my glove with a dense slap. It had come down heavy. I looked up to see Jack’s body posed in the deep bend of a pitcher’s follow-through. He was an absolute natural.

Emmet has always been more effeminate, though. As a toddler, he played with Disney princesses. For Christmas, he consistently asks Santa Claus for My Little Ponies because he likes to brush their
rainbow-coloured locks. When he was four, he started wearing knitted UGGs to daycare. When he was six, he ordered me, as the only fashion columnist and amateur tailor in our household, to make him denim shorts. He pointed at his upper thigh. “I want you to cut it to here, like Beyoncé’s,” he said. The kid wanted hot pants. What could I do? I complied. He wore them every day until his summer-camp director decreed that shorts should be at least kneelength for girls and boys. Emmet took the ban in his stride, deciding to wear skinnies tucked into cowboy boots instead.

A father reflects on the game and his sons, on the next page...

In fact, one time his mother tried to leave for work wearing a pair of flats. I’d learned through experience that suggesting lastminute costume changes on workday mornings is deeply unwelcome, but Emmet didn’t care. He stretched his arms out and blocked the door.

“You can’t go out like that. You have to wear heels,” he told her.

“I have to go to work,” said Melissa. She tried to worm her way around him, but Emmet threw himself down and wrapped his arms around her calves.

“Please, Mommy, change,” he cried, not letting go until she switched to a pair of high-heeled pumps—which, I might add, were the right choice.

If you detect a note of paternal pride, you are right. Emmet is a prodigious natural in his own way. Yesterday afternoon, I asked him if he wanted to go outside and chuck the baseball. “I’m not very good at it,” he shrugged. Then he donned a Breton-stripe shirt and zipfront sweater. For good measure, he set a fedora he’d absconded from my wardrobe on his head at a jaunty angle and rolled up the hems of his new dark-indigo jeans to flatter his sky-blue Half Cab Vans. He’d hit an absolute fashion home run.

But, truly, these concerns and points of pride don’t really matter. The boys are like clouds. They change shape and direction with the gentlest wind. What worries me today may be gone tomorrow—and it’s all beyond my control, isn’t it?

Which brings me back to my love of baseball, where the real secret to a good game of catch is to gracefully receive what is thrown your way. If one summer, Emmet—or Jack, for that matter—has a secret and wants to share his feelings about men or women, or about himself, I hope the arc of the ball will serve as a bridge, connecting us over any distance that may grow in the coming years. And, this time, nothing between father and son will be left unsaid.

JJ Lee is the author of
The Measure of the Man: The Story of a Father, a Son, and Suit
. It was declared in 2011 one of the best books of the year by
The Globe and Mail
, Amazon.ca and Kobo. The book is now available in paperback by Emblem Editions. For more information, visit jj-lee.com.

Connecticut-based photographer Don Hamerman has been turning discarded baseballs into art since 2004. You can purchase this photograph here.


How to be happy: Philosophical counselling

Relationship advice: How to make your long-distance relationship work