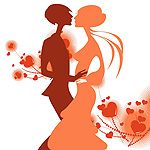 While many people are perfectly happy living the single life, it’s not unusual to be envious of the happy couples in your circle of friends. Feel like you’ll never find true love? Maybe you just need to revamp your dating strategy. We spoke with psychiatrist Dr. Paul Dobransky, author of The Secret Psychology of How We Fall in Love, for his tips on how to find the perfect partner for you.

1. Opposites really do attract
“The ideal is with the person who is opposite in style to us,” says Dobransky. “If a man brings certain emotional and intellectual skills to the table that a woman lacks, and vice versa, they make a perfect team.” So if you’re on the shy side, a more extroverted partner will help balance your personality; if you’re logical and a planner, you’ll make a great team with someone who’s spontaneous and creative. (Not sure where you fit in? Dobransky offers a free personality test on his website, kwml.com.)

Keep in mind that finding someone who’s your opposite in personality may mean stepping outside your comfort zone when it comes to meeting people. “If you only go to what’s comfortable for you,” says Dobransky, “you’re only going to meet men who are too much like you rather than your opposite.” So if you’re very outgoing, consider going to places and events that your opposite might attend, like book readings or a continuing education class, and vice versa.

2. But you can’t be too different
Dobransky recommends looking for partners with a personality that complements yours — your opposite — but stresses that you should still share similar dreams and goals. “We all need people who have similar beliefs, goals and values,” he says. After all, if he wants kids right away and you picture them in a hazy, faraway future, you’re going to have some instant fodder for arguments and unhappiness. “We can’t possibly commit to another person without joint goals,” says Dobransky.

3. You have to have mutual attraction
Sex is a key component of a happy relationship, says Dobransky. Without mutual sexual attraction and — when the time comes — a healthy, happy sex life, a relationship is doomed to fail. But make sure not to confuse passion, love and commitment — they’re all separate things and should be cultivated individually. In the early stages of the relationship, Dobransky says, “women should hold out on giving sex for there to be more of a chance of commitment.” And men, he adds, “ought not to dive into commitment too easily if there isn’t a great sexual chemistry.”

Friendship is key … find out why on the next page

Booty call breakdown — how to decode this kind of relationship 4. Friendship is key
Lust without friendship has its place, but a committed relationship isn’t it, says Dobransky. And friendship without sexual attraction is, well, “just friends.” You have to have both, says Dobransky, who recommends “screening” dates for their friendship potential by asking yourself, “Is he generally happy, not anxious? Is he my opposite in personality style?” Be honest in assessing his personality, and don’t be afraid to ask pointed questions. And if you like the answers, says Dobransky, and think the two of you could make a perfect team, then “it’s a natural next step to realize, hey, I could commit to this person.”

5. Judge his character
Not to be judgmental, but some men (and, to be fair, some women, too) just aren’t commitment material. They might be fun for flings, but if you’re looking for something serious, you need to leave the bad boys behind. That doesn’t mean settling for boring, but it does mean finding someone who’s mature enough to respect you and keep promises. Dobransky recommends engaging what he calls your “cool eye,” the ability to step back mentally and assess things objectively. Don’t let yourself get swept away — unless you can honestly say he fulfills all your needs.

6. Be honest about how good it is
It’s one thing to have realistic goals in finding a partner; it’s another to settle for a relationship that doesn’t truly make you happy. Yes, there will be up days and down days, but overall, you want to have positive feelings about your partnership. So check in with yourself periodically on how things are going, and don’t be afraid to move on and look for something better. Because in the end, says Dobransky, “relationships should benefit our lives, not be a second or third job.”

Read more
How to tell if it’s time to move on
One man’s quest to pop the question
Marriage checklist: Are you ready to say I do?