You've never heard of the model in Topshop's new campaign

Get to know Lily Jean Harvey, you'll be seeing a lot more of her. 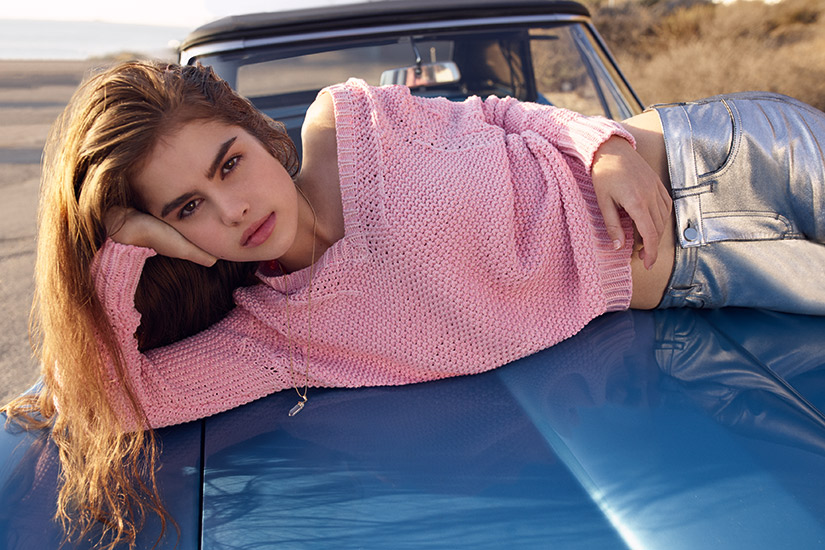 What’s the next move for a brand with a track record for casting the biggest, most influential faces in the modelling world? Brit mega-retailer Topshop, which counts Bella, Gigi and Taylor Hill as campaign stars, went in the opposite direction this season and cast an undiscovered face. Enter Lily Jean Harvey, a 17-year-old from Newark, England whose brunette locks and enviable eyebrows resemble a cross between Kaia Gerber and Lana Del Rey. Harvey is the star of Topshop’s spring/summer campaign, which was shot on the streets of London as well as the beaches of California by photographers Clara Balzary and Stef Mitchell. Here, Harvey shares her summer plans, style icons and what it’s like to work with the brand.

ON WORKING ON THE TOPSHOP CAMPAIGN
“I’ve never been to America before so that was the most exciting part of the shoot. It was on this incredible empty beach in LA called Moogoo Point; it was tiny and even the locals hadn’t heard of it. We even saw dolphins! I was with my mum, so after we went to Venice beach and Hollywood Boulevard, all the places you have to go. We went to In-N-Out Burger and I had the best burger in my life.”

L.A. VERSUS LONDON
“There definitely was a different mood. The LA shoot was really laid-back, but that was because we had lots more time. The whole shoot was set to the sound of the sea, so it was really calming. The London shoot was manic and fast-paced – we had a timetable to stick too. But both were really good in their own way; each shoot totally summed up each place.”

ON BEING THE FACE OF TOPSHOP
“I found out in September, right around the time of the TOPSHOP Unique show. My mum got the call; I couldn’t answer because I was at school. I couldn’t believe it; it was so surreal and I didn’t really believe it for a while. People ask me where the pictures are going to be, and it’s mad to think they’ll be everywhere.

All my friends think it’s really exciting, and they say, ‘when you get invited to cool stuff you have to bring us!’”

SUMMER LOVES
“I love strawberries. Strawberries and cream. I love going for a walk in the countryside, seeing all of the wildflowers and bees and butterflies. I just love that summer is so laid back and calm, you don’t need to really put any effort into anything.”

VACATION PLANS
“I usually go with my family, but I’m not this year – I’m going with friends. We haven’t decided where we’re going yet, but might go on a holiday or a festival somewhere, probably Croatia.”

FAVOURITE APP
“Probably Snapchat. I mostly use it to talk to my friends and use the ‘Explore Stories’ bit. I love horoscopes so I read those; Vice does really good daily horoscopes.”

FIRST IMPRESSION
“I’m a bit reserved and detached to begin with; once I get to know someone I’m absolutely fine, but before that I’m a bit restrained. I think people that are instantly confident around people are kind of scary.”

ON HER FIRST MEMORY OF TOPSHOP
“What are your earliest memories of Topshop?
The first thing I owned from Topshop was a dress when I was about 11, I was really short so it had to be from the Petite range. It was red, white and blue striped, just a jersey dress. I loved it so much; I squeezed into it until I was 14.”

ON HER MODEL UNIFORM
“Jeans, a t-shirt, and I always wear trainers. I don’t think I own a pair of shoes!”

ON STYLE ICONS
“To be honest I do really love Kylie Jenner. I love that she has a very done-up style and embraces it no matter what other people think. My favourite person to stalk on Instagram is Snitchery – she’s a make-up college student and does really cool beauty how-tos.”