The Canadian model on why walking the Victoria's Secret show felt like "making it." 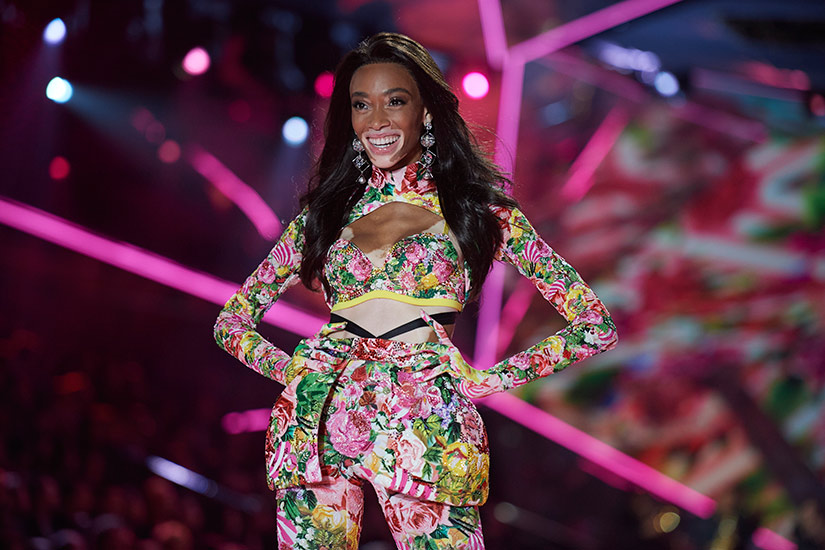 ​​​​You’ve been vocal about wanting to walk the VS Fashion Show. How did it feel when you found out you were going to achieve that goal this year?

“It felt like a breakthrough and almost a relief. The VS Fashion Show was one of the first, if not the first, show that I grew up watching because it was so accessible to everyone, especially when social media and the internet weren’t used to document most runway shows. And walking in it was such a big goal of mine because it grew into such a large platform for models. It was THE standard to aspire to. I felt like I had truly made it in that moment.”

How, if at all, did you change your health and fitness routine to prep for the show?

“Really, I just put my routine on steroids. My workouts were more frequent and my diet plan was stricter than usual. I tried to not let the show affect my day-to-day routine too much, but it was the Victoria’s Secret Fashion Show, I had to put in SOME effort.”

“Backstage was crazier than your usual show, but the VS team has got this down to a science — it was super contained chaos. The vibe among us models was so joyful and encouraging. We were all just so happy to be there and cheer each other on. It felt extra glamorous — even though we weren’t wearing that much!”

Do you have any sort of pump-up song you play, or mantra you repeat, or any other backstage pre-show ritual?

“I try to put myself in zen mode before I walk so I don’t get nervous. I just do a lot of deep breathing while changing and before I walk to calm myself down.”

Describe what it was like to walk the runway. What were you feeling?

“Surreal is probably a clichéd word to use to describe that feeling, but it’s absolutely true. It was overwhelming in the best way possible to walk the stage I’ve been dreaming of since I was a pre-teen, and I just hope it wasn’t the only time!”

How did you feel post-show? What did you do to celebrate?

“After celebrating with all of my girls backstage and jumping up and down with my family, we immediately went out to get the best junk food and drinks we could find. I wanted pizza, burgers, and everything sweet!”

Regarding the show’s casting decisions this year, and the discussions that took place after, what’s your take? Is there something to be learned from this year’s runway?

“I still believe that we’re making strides toward achieving true diversity, but I think this situation is reminding us once more just how important it is. We need to consider every end of every spectrum and make sure shows represent everyone, not selected groups. And that includes trans and plus-sized people.”

Are there any women in your life you admire and look up to?

“So many, but if I had to choose one, it would be my mom. And the women in my family. They taught me strength, class, perseverance, and how to stand up for and stay true to myself no matter what. Plus, we’re just a fabulous bunch, if I say so myself.”