Why designers are obsessed with the sheer trend

Freeing the nipple, one see-through dress at a time. 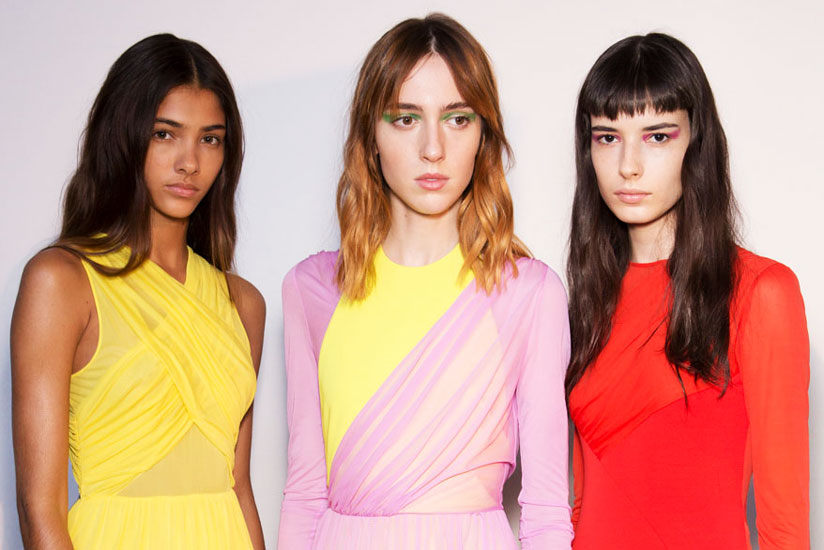 After Maria Grazia Chiuri’s first haute-couture collection as Dior’s new creative director earlier this year, it wasn’t the designer’s take on the house’s iconic Bar jacket or her “tuxedo” culottes that caused a commotion. That honour went to Bella Hadid, the face of Dior Makeup, who, at the show’s masquerade-themed afterparty at the Musée Rodin in Paris, covered up her famous visage with a glitter-encrusted mask but left one particular area almost completely bare: her nipples. Dressed in a sheer bustier-style Dior gown with nothing but a layer of gauze between her breasts and the world, Hadid put the “naked” in naked dress.

The supermodel isn’t the first celebrity to flash a nip – or a hint of one. In the past few months alone, Zoë Kravitz, Scarlett Johansson and Sienna Miller have played peekaboob in sheer pieces by Coach, Alaïa and Dior, respectively. But perhaps the most vocal (and visible) is Kendall Jenner, whose nipples are becoming as famous as her sister Kim Kardashian’s posterior. Whether walking the streets of New York City braless in a sheer black onesie or skirting Instagram’s nipple ban by strategically placing a pair of pizza emojis over her girls, the model is transparent about her love of transparency. She explained her enthusiasm on her website last July: “It’s sexy, it’s comfortable and I’m cool with my breasts. That’s it!”

Celebrities often have a different fashion playbook, but judging by the number of nipple-boasting diaphanous gowns and silky-sheer blouses floating down the spring runways, it seems that designers are hoping their non-celebrity clients will also test drive the trend. At Balmain, Olivier Rousteing proved that a high neckline can be sensual when crafted from see-through silk chiffon, while at Emilio Pucci, Massimo Giorgetti sent the message that sheer jersey gowns may come in robin’s egg blue and lemon yellow but transparent is the colour of the season (and next, if you take even a cursory look at the fall collections). And at burgeoning New York-based label Tome, silky black-and- white plaid was styled both with and without modesty layers underneath. “We think that the woman’s body is beautiful and there’s no need to hide it,” says Ramon Martin, co-designer for Tome. “We like giving her the option to show as little or as much of her body as she wishes.”

It is, after all, legal in both Ontario and British Columbia for women to go topless. Still, you’re more likely to spot a unicorn on Bloor Street or Robson Street than a nip slip. Even a breastfeeding mother’s nipple can provoke strong reactions. “There is a stigma surrounding the nipple and the female chest…but [women] are part of the problem: We’re asking for permission; stop asking and just own it,” says Lina Esco, actress and director of the 2014 film Free the Nipple, a semi-biographical tale of a group of female New Yorkers who use toplessness as a Trojan Horse to prompt conversations about gender equality. The movie sparked the #FreeTheNipple campaign, a global feminist movement that helped spur Facebook to overturn its no-tolerance policy regarding breastfeeding pictures. Rousteing referenced the free-the-nipple movement as a sort of call to action after his provocative spring/summer 2015 show, and – consciously or not – fashion designers have been helping to normalize the nipple, one gossamer gown at a time.

“That’s our goal,” says Ryan Lobo, the other designer for Tome. The duo are using much more than sheer to make that happen. Their fall/winter 2017 collection included a cropped blazer with conical nipples, jersey dresses with pairs of contrasting circles placed just so and jackets with female-shaped curves seamed in. “We wanted to highlight the female silhouette, particularly the breasts,” says Lobo. “It’s a literal translation of ‘Free the nipple’ and ‘My body, my choice.’ This idea that female breasts are solely sexual objects (while male breasts are not) and somehow ‘shameful’ has become ingrained in society.” That’s a sentiment Tome is hoping to change.

Designers are no strangers to using the runway to shake up social norms. Before Stella McCartney put the luxe factor in faux leather, vegan-friendly fashion was embraced mainly by PETA activists, not streetstyle stars. Pantsuits were still considered a man’s uniform until Saint Laurent brought his Le Smoking tuxedo to women’s closets in 1966. And would so many women be willing to draw attention to their abs if Alexander Wang hadn’t ushered in the crop-top trend with his athleisure-heavy spring/summer 2010 collection? “Over a hundred years ago, ankles were considered obscene; now we look back and laugh at it,” says Esco.

Does that mean that a pair of nipples may one day be as commonplace as a pair of kneecaps? Consider Eleonora Carisi, the Italian fashion blogger who, in 2011, was snapped braless in a sheer Stella McCartney blouse in New York City by street-style photographer Mr. Newton. Blog commenters’ reception of Carisi’s ensemble was generally warm. And on the street? “Nobody looked at me, for real,” says Carisi.

As with any movement, public sentiment often moves two steps forward, one step back. Over a decade after Nipplegate became the most searched term in Internet history and Janet Jackson was hounded into giving a public apology for her Super Bowl nip slip (while Justin Timberlake’s role in the “wardrobe malfunction” was barely acknowledged), the controversy over the nipple and the breast in general hasn’t completely vanished. Emma Watson, an outspoken women’s rights activist, was recently vilified for showing too much boob under her Burberry bolero in a photo shoot. The opinion behind the backlash was that she couldn’t be a feminist and show off her body. But as the actress so succinctly put it: “I really don’t know what my tits have to do with it.” It’s a comment worth keeping in mind as gauzy sheer pieces take up more permanent real estate in our closets. And perhaps one day, when the nipple has truly been freed, we’ll be able to look back at this query and laugh at it.