Why Berets Are This Season's Ultimate Accessory 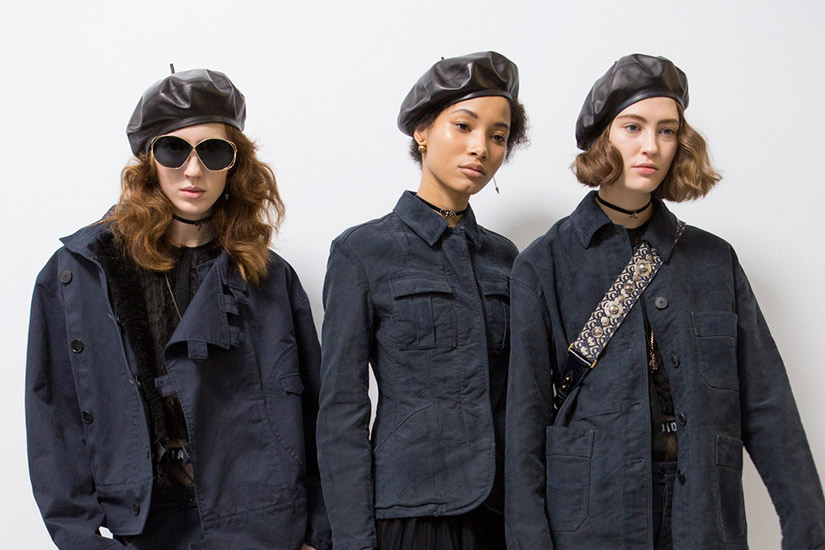 Less than eight months ago, it didn’t look likely that any French woman would ever wear a beret again. They’d long become the opposite of chic – mainly used as a symbol of French satire along with baguettes and a string of garlic cloves.

And yet last season, they made a comeback. At Dior, they were leather and pulled firmly over model heads, while Gucci’s imbued a Margot Tenenbaum eclectism. Marc Jacobs opted for 90s-inspired Kangol shapes. Rihanna has since been seen in Dior’s leather style, Clemence Poesy favours a felt version pulled back off the head like a beanie and Bella Hadid styles hers with streetwear for a modern look.

Headwear is big news for the new season – anyone who braves a hat projects an air of confidence. They enhance – or at the very least change an outfit. But what makes the beret so relevant for 2017? Despite its military roots, the beret has long been associated with creatives and hipsters throughout history – they were worn by beatniks, painters, directors and poets. Ernest Hemingway, Pablo Picasso, Edith Piaf, Marlene Dietrich, John Lennon, Yoko Ono and Brigitte Bardot all loved them. It was the hat favoured by intellectual free-thinkers.

But then the beret got political; Che Guevara used it in the 60s as a symbol of revolution, wearing it as he rallied for supporters to rise against the Batista government in Cuba. Even after he died in 1967, it was a look adopted by other activists, most notably by nationalist and socialist party Black Panther Society.

With all this in mind, it’s no surprise that this formerly cheesy French favourite is back. The beret is woke. As we all know, it is fashionable now to be socially conscious, to campaign, to be outspoken and to be politically engaged. The woke generation are informed, questioning and passionate about change. The beret’s history renders it the ultimate symbol of wokeness; of the current popular stream of thought.

The fashion industry, at its best, has always reflected the times we live in, which is perhaps why we’ve seen such a rise in politically-charged fashion. Look at Vetements’ EU hoodie, Dior’s cult feminist T-shirts or the number of celebrities who have used their red carpet choices to make a stand, from Ruth Negga to Karlie Kloss. Then there’s the now ubiquitous Corbyn T-shirts, which use Nike’s famed font and logo tick.

There’s an argument that the industry is cashing in on social and political causes, and that influencers attempt to be ‘woke’ in order to achieve a level of depth, but there’s nothing new in designers or the public trying to make a stand through clothes. And, the beret – whether felt, fluffy or leather – has always been the hat worn by those wanting to make a stand.

So how do you wear it now in all its wokeness? Avoid anything overly jaunty or angular so as to steer clear of Parisian parody. This season’s beret should be pulled fully over the head, covering half of your ears. It won’t be easy to lead the resistance if you’re worrying your hat might fall off. If you really can’t bear to be parted with the beanie, then pull the beret over the back of your head as you normally would and hope you don’t lose it in a gust of wind.

If you want to look woke this autumn, start at the top – choose the beret.