When did socks become so cool?

The humble basic has evolved into a true fashion piece—with a price tag to match. 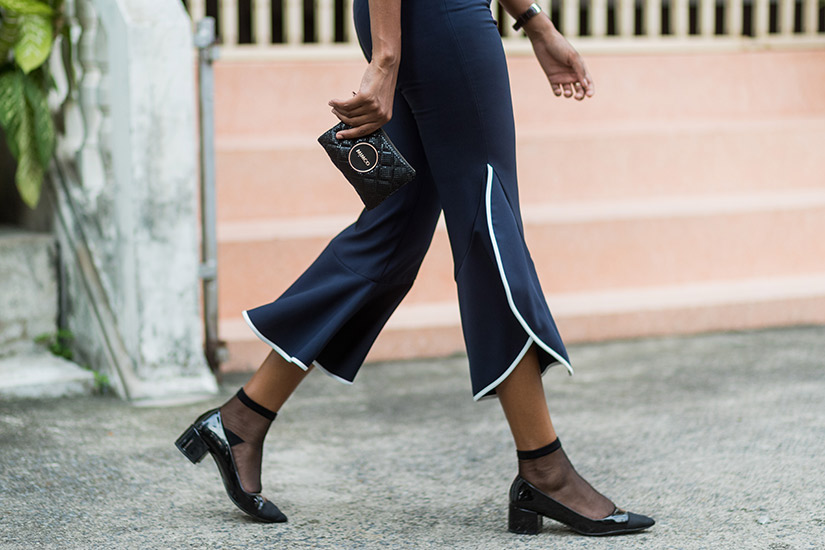 It took me longer than I care to admit to pick a pair of socks this morning, and it wasn’t for a lack of options. Mixed among the usual plush white-cotton bunches were glittery Lurex pairs in eggplant, inky blue and blush. Elsewhere in my drawer, separated from their mates, a fishnet ankle sock and a zany argyle number were engaged in an unlikely rendezvous. And in the farthest corner, a pink-and-yellow ruffled pair beckoned.

We have entered the age of the fashion sock. The options on the spring/summer 2018 runways were as delightfully varied as those in my bedroom. At Kenzo, models wore semi-sheer Beetlejuice-striped pairs with chunky buckled sandals. At A.P.C., there was a nod to nostalgic nerdiness with scrunched-down weighty-knit socks worn with loafers. And at 3.1 Phillip Lim and Monse, a totally new idea emerged: With the feet cut off, these socks were more haute ankle cuffs than functional garments. Is there a truer sign of trendiness than desire despite impracticality? Right now, a Gucci pair adorned with hundreds of shiny turquoise paillettes can be yours for a cool $625. It’s an eyebrow-raising price for a few inches of embellished cotton, yet the style was clicked on 10,000 times in one month on fashion search engine Lyst.

“Socks are the accessory that everyone has been sleeping on,” says Abigail Lorick, design director at Stance, the streetwise NYC sock brand that has collaborated with such tastemakers as Rihanna, Willow Smith and SoKo. “All of a sudden, they don’t just finish an outfit; they make an outfit. Hot-coral socks with black pants and black flats is so chic.”

Paula Maso, the designer behind Happy Socks’ new fashion-minded line Hysteria, chalks up our collective enthusiasm for socks to our desire to express individualism. “Every detail of a person’s outfit is becoming their own,” she says. “People are making an effort again, and it’s okay to show that – down to the socks.” Guys too. Finally, funky socks aren’t just a way for suited-up men to signal that they have a “fun side.”

As brands like Vetements, Off-White c/o Virgil Abloh and Marni continue to push the elevated-sock message into the mainstream, the humble basic will keep evolving. “It’s not just about a knit sock anymore; we’re exploring different weaves, embroidery and heat transfers,” explains Lorick, adding that fishnets aren’t going away anytime soon. Another trend to note? Ultra-sheer socks with a coloured band and an embellishment that resembles a tattoo. She also predicts that tucking denim into chunky socks, as seen on the A.P.C. runway last season, will become a major styling trend – Kanye West is already on board.

Back in my closet, I finally settled on a pair – ankle-length peachy nude with gold flecks – thanks to Maso’s wise words: “At the end of the day, it’s just [a pair of] socks. You’re supposed to have fun with it.”

Fashion week street style from around the world. Image by: Getty

This story originally appears in the January 2018 issue of ELLE Canada.