What is the future of Canadian fashion?

How four Canadian fashion designers are trying to beat the odds. 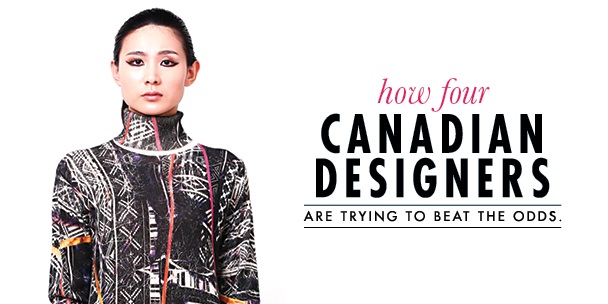 Back to basics: Dace
Story by Nathalie Atkinson
Dace Moore launched her eponymous line in Vancouver in 2001. Initially, she showed at both Vancouver and B.C. fashion weeks, attended U.S. trade shows and had showrooms in L.A. and New York. Then the 2008 recession happened, and many boutiques carrying her clothes shut down. Today, as Moore continues to rebuild her U.S. accounts, she skips the cost of a trade-show booth (which was $6,000 the last time she attended, plus airfare and hotel, all with no guarantee of writing any orders). “It takes two or three [trade] shows to have people take you seriously,” she explains. Every season, Moore goes to New York to meet with potential retailers. “I’ll meet them at the hotel or go out to their stores. It’s like it was in the beginning: more personal— back to the basics.”

How hard is it to be a CANADIAN DESIGNER?

Brave new world: Jamil Juma
Story by Nathalie Atkinson
“Fashion’s a global market,” says Jamil Juma, the Canadian-born designer who, with his sister Alia, helms fashion label JUMA. The siblings divide their time between New York and Dalian, China, where they oversee JUMA production. The brand also has a dynamic online presence: The siblings recently launched a bilingual Mandarin element to their website—including an online store—and they’re active on social media, including Weibo, China’s Facebook. Their 21st-century approach is paying off: They designed tour costumes for Nicki Minaj and, this past June, opened a pop-up shop in Beijing. “My opinion is that it’s not important to get into 20 magazines a month anymore,” explains Jamil. “The most important thing is to have an authentic and active voice on social media.”

Check out Kirsten Schaefer and Kat Marks on the next page…

One to watch: Kirsten Schaefer

Kirsten Schaefer admits that being a newcomer on the
Canadian style scene is daunting, but she says her unique approach to design fills a hole in the marketplace. The winner of the 2013 ELLE Canada Graduate Award in Fashion is best known for her work transforming wedding dresses so that they can be worn multiple times. “I think I have a love-hate relationship with those gowns,” Schaefer, 32, says, laughing. “I love watching
Say Yes to the Dress, but you spend $5,000 and you only wear it once.” The Mississauga, Ont., native decided to focus on creating cocktail-length dresses with removable parts—like belts or shrugs—that can be repurposed after the big day. “A lot of people look at their wedding and say ‘I looked so good!’” she explains. “Now, they can take a part of that with them.” She’s cautiously optimistic about the future. “I rely on a lot of research and am taking my time with the launch,” she says. “But number one is the design. If it’s good, people will buy it.”

Kat Marks, 28, creates sculptural, thought-provoking pieces that are collected by fashion insiders like Daphne Guinness. After a four-year stint in London, where she collaborated on fashion films with Nick Knight, she recently moved back to Calgary, her hometown. “Being recognized outside of Canada is key, especially for designers looking to position themselves alongside the big fashion houses,” says Marks. “For me, living in London was crucial because my collections are luxe and avant-garde, and there are more customers internationally looking to invest. Still, it’s always a challenge!” Next up? An online boutique (
katmarks.com) featuring a new line of handcrafted
leather accessories.