What is modern power dressing?

Forget the power suit—these days, being yourself is the key to being taken seriously. 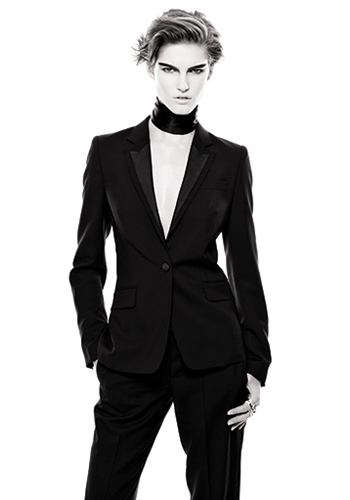 The tenets of power dressing used to be simple: a trench coat, a pair of very good shoes and a well-tailored suit—the latter often mightily buttressed by shoulder pads. However, a recent study conducted by Harvard Business School found that not only do a suit, tie and Rolex not always read as powerful; they can actually be trumped by a lousy pair of sweatpants and a cheap watch. The study asked sales associates in Milan luxury boutiques whether a woman wearing gym clothes or a woman in a fur coat entering a high-end store was more likely to buy something. The lady in the Fendi topper, right? Nope. The sales associates predicted that Ms. Gym Rat was more likely to shell out for a Birkin. In another scenario, the study asked university students to choose who was more powerful and competent: a clean-shaven professor wearing a tie or a bearded professor wearing a T-shirt. The students picked the lecturer with three-day-old stubble in the Champion tee.

What manner of superiority emanates from yoga pants and a concert T-shirt? The French call it je ne sais quoi and leave it at that, but the Harvard researchers concluded that “intentional nonconformity” sets apart the rich and powerful. Translated into fashionese, this in- cludes London mayor Boris Johnson’s haystack of a hairstyle, architect Zaha Hadid’s black opera-house-proportioned coats, Mark Zuckerberg’s hoodie and International Monetary Fund’s president Christine Lagarde’s banner scarves. Intentional nonconformists know the dress code but don’t give a damn. As one insightful shop assistant in the study put it, “Wealthy people sometimes dress very badly to demonstrate superiority.”

A form of this strategy has worked for Pope Francis, who turned down the traditional ermine-trimmed crimson papal shrug in favour of a minimalist white cassock. The rich velvets and gold Vatican bling have remained in the papal closet, and the Pope’s popularity has risen heaven-high.

Still, impoverishment, even of the Jesuitical variety, is at the extreme end of the power-aura spectrum. Perhaps a more useful interpretation of those Harvard findings is that powerful people are not afraid to be themselves or, even, to be a little bit more than themselves. “True power is the liberty to be an individual with a point of view, fashion and otherwise,” suggests Gay Gassmann, a Paris-based art curator who regularly wears Marni, Andrew Gn and Chanel. “It’s about having the option to not conform and have a personal style. It follows that the higher up the ladder one is, the more the fashion rules break.”

MUST-READ: Your DREAM CLOSET in 5 steps

For fans of The Good Wife, the rise of Alicia Florrick (Julianna Margulies) from hard-done-by political wife to top-flight Chicago lawyer offers a lesson in adopting subtle hallmarks of sartorial power. “In the beginning, her look was very ‘I’m really trying. I have on my blazer. I’m ready for work,’” says Daniel Lawson, the show’s costume designer. “It was boxy and mix-and-match, but now [she wears] more fitted, flattering head-to-toe ensembles with angular, architectural necklines.” Lawson dresses Margulies in labels like Escada, Armani and Max Mara and also offers wardrobe workshops to professionals who want the Alicia Florrick look. “It always surprises women when I tell them that they don’t have to wear collared blouses, [a version of] the men’s dress shirt. It’s okay to have a pretty, elegant under layer—a tank, a shell or something with a scarf that ties into a bow—as an alternative to just a shirt.”

Carrie Goldberg, a Brooklyn-based lawyer, remembers that neck- ties were the pièces de résistance in her outfits during her early days in court. “I had just inherited both my grandfathers’ collections of beautiful silk neckties, and as a before-work ritual my then husband would knot my tie,” explains Goldberg. “I recognized the value in being memorable, which started with being visually memorable.” Goldberg’s approach? “I branded myself, adopting a specific uniform: a skirtsuit, ridiculously high heels, oversized glasses and hair in a loopy bun.” While Goldberg no longer rigidly adheres to this attire, in court- room battles she always brandishes what she calls her “extenders”: long nails, long eyelashes and high heels. “My extenders all feel like little weapons to me,” she says. “The heels are particularly important because, although I’m not particularly short [five feet five inches], I like to be as close to eye level as possible with my adversary. And I always wear a pair of oversized glasses.”

Men’s neckties and XL glasses, however, require a degree of style literacy rare in most executive spheres. Mary Barra did not become the first woman to run General Motors by experimenting with outlandish Louboutins and Lanvin necklaces. In fact, most photos show Barra wearing dark pantsuits and white collared shirts. Forbes’ most powerful woman in the world, German chancellor Angela Merkel, wears nothing but the most risk-averse suits. Her high-powered peers—Hillary Clinton, Federal Reserve chairwoman Janet Yellen and U.S. Supreme Court Justice Elena Kagan—reportedly rely on a little-known American designer named Nina McLemore for their conservative wardrobes. (Think jackets, jackets and more jackets with nary a high heel or obstreperous piece of jewellery in sight.) According to Robb Young, author of Power Dressing: First Ladies, Women Politicians & Fashion (2011), these women are likely embracing a specific sartorial strategy. As Young writes: “In the political and corporate worlds, individuality can be an effective device for power dressing only so long as it’s nothing more than a playful brush stroke on an otherwise conventional canvas. But if you cross that invisible line of conformity, there can still unfortunately be hell to pay from the army of armchair critics.”

Clothes may make the man, but clothes cannot make too much of the woman lest she be accused of being fashionable and, by extension, feeble-minded. Women who hold the top jobs must still look as if clothes are but a distant afterthought. “She didn’t seem to care about her outward appearance at all,” Lothar de Maiziere, the last East German prime minister, recently recalled about Merkel as a political newcomer in 1989. “She looked like a typical GDR [German Democratic Republic] scientist, wearing a baggy skirt and Jesus sandals and a cropped haircut.” If powerful women are simply uninterested in fashion, that’s fine. But if they repress their natural sense of good style by dressing conventionally or even badly, then feminism has advanced little in matters of power dressing. The only progress is that we are no longer obliged to dress like men.