We tested the Michael Kors smartwatch

Michael Kors Access, the latest wearable to hit the market, is one stylish gadget. 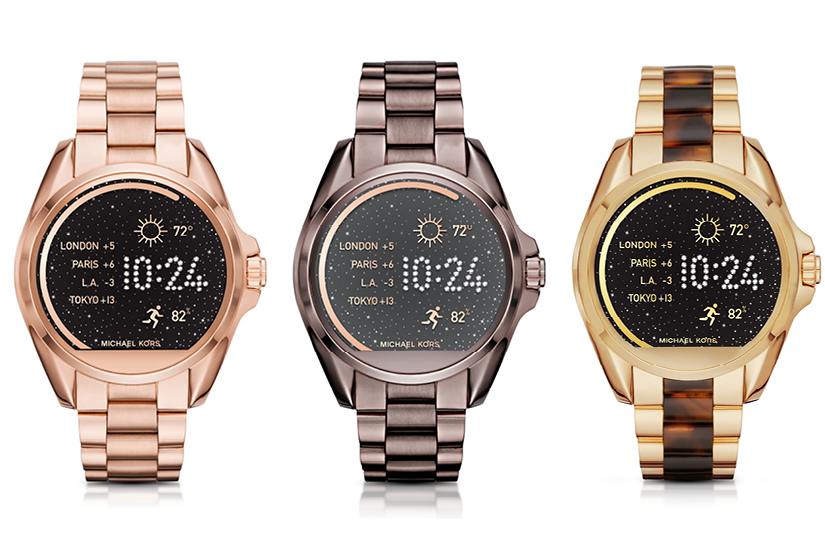 Waking up on a Monday morning is tougher than scoring a Saint Pablo hoodie in a size small. But instead of my iPhone’s familiar (and easy to ignore) tone, I hear the vibrations of my Michael Kors smartwatch. The newly launched wearable is going to be my sidekick for the week. I’ve got the Bradshaw: a chunky, gold timepiece that looks just like Michael Kors’ analog model of the same name, with one immediately noticeable difference: interchangeable watch faces. There’s a utilitarian, sporty face and a glitzy pavé option, but I settle on a classic look with Roman numerals. I play around with the colour options, like a moss background with gold numerals (classy) or hot pink and grey (definitely not for me), eventually settling on navy and gold. I could also set a timer on the watch to change the face automatically, from a more informative face for day and a simple face for night.

The watch is powered by Google’s Android Wear technology, which makes it compatible with both Android and iOS devices. It comes loaded with all the usual smartwatch features like the voice-activated alarm that woke me up, search and social notifications. On the train on my way to work, I found another handy feature: I was able to pause my Spotify playlist with the tap of my watch to hear the announcement of yet another delay.

The watch did take some getting used to. It took a few days to stop feeling self-conscious when I held the watch close to my face and said, “ok, Google, how old is Beyoncé?” (I really needed to know!) or flicked my wrist up and down—the watch uses these simple motions to scroll through notifications. I’m notorious for not paying attention to my phone, so I appreciated the ability to instantly answer a text with my voice or know that I was getting a call.

A fitness tracker is a non-negotiable wearable tech feature for most, but I don’t always enjoy receiving a peppy notification to get moving when I’m on deadline at work, nearing my eleventh hour at my desk. Instead of disabling the feature, as I’ve done with past devices, I gave this one a chance. To my surprise, the Michael Kors smartwatch was less of a drill sergeant and more of a cheerleader, with push notifications like “keep it up!” Encouraging words, even if the bulk of my exercise that day was a coffee run.

And yet, the coolest feature of all might be the fact that the watch looks just like a regular timepiece, the flash of the digital—and changeable—face is the only giveaway to the gadget’s many tricks. The inconspicuous look is nice, making me feel like I’m in on a secret.

The Michael Kors Access smartwatch is available now. Check out It-girls Zendaya and Martha Hunt take the watch for a spin in NYC below.