Virgil Abloh has conquered fashion and furniture; now he’s got Toronto in his sights. We followed him for a day as he opened his first stand-alone store in North America. 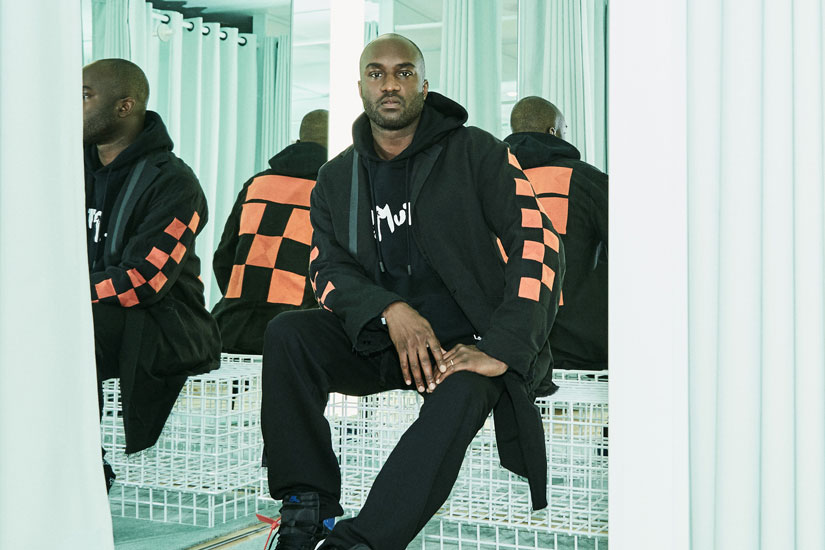 Virgil Abloh’s iPhone can never die. On the day I meet him in Toronto, we exchange pleasantries and then he immediately seeks out the nearest outlet for a charge. The founder and designer of four-year-old elevated-streetwear label Off-White c/o Virgil Abloh (yes, that’s the preferred name) is in town for the opening of the brand’s Yorkville boutique, the first stand-alone location in North America. But production for the new collection is under way in Milan, and Abloh must stay on top of it—hence the cellphone. The cord he has is short, so for much of our conversation, Abloh’s athletic frame is slumped in a folding chair so he can stay tethered to the device, somehow managing to have the same quietly imposing (but far from look-at-me) presence as when he is standing up.

Speaking to a journalist while remotely producing a fashion line is what some might call multi-tasking. For Abloh, who is dressed in an Off-White black-and-orange-checked coat, slouched-just-so trousers and Nikes with laces purposefully untied, it’s the only way to work. And he’s always working. In addition to his own label, Abloh is Kanye West’s long-time creative director, advising West on such matters as tour merch and stage visuals. He has also spent the past year designing his own line of furniture, guest-lecturing grad students at Columbia University about being creative for a living and flying around the world to DJ under the name Flat White. As I write this, the Internet is abuzz with the news that he is collaborating with IKEA on a line of home goods for millennials.

It’s safe to say that Abloh, who studied architecture at the Illinois Institute of Technology, is more than a fashion designer—in just a few years, he has conjured a compelling brand mythology (instantly recognizable typography and a cadre of in-crowd collaborators) that takes old-school fashion houses generations to cultivate. You can’t help but want to be a part of the movement. “Designer brands need to be a reflection of the time,” says Abloh, whose clothes play on youth culture, streetwear and overt branding, such as a pair of white patent boots emblazoned with the words “For Walking.” (Abloh seems to have a penchant for quotation marks: The Toronto boutique is called “Land,” and I’ve spotted a hoodie printed with “Something special.”) But there’s also a sense of artistry in his work. Consider the pair of Levi’s jeans that have been meticulously studded with 10,000 Swarovski micro-crystals. “I think luxury brands lost their hypnotic effect on the public by being a one-way street,” he muses. “My genre of designing comes from the ’90s— an era of skateboarding and hip hop, which are communal things.”

A sense of community is fundamental to the Off-White code. I experience it first-hand later that evening at Lee on Toronto’s bustling King Street West while dining with the international Off-White family. There’s the suave chief of production from Milan, a model with an Elle Macpherson resemblance to match her Australian accent, and the store’s manager, Tyler Brand, whose scraped-off black nail polish and single dangling earring signal the kind of studied coolness that borders on intimidating. While we await Abloh’s arrival, Brand tells me that when the staff decided to briefly open the doors to the public, they made close to $60,000 in two hours. Most of the clientele were star-struck youth who stood in a line that curved around the block. “It’s huge among 16-year-olds,” he says. “Today, kids were telling Virgil that he’s their inspiration. They look up to him, like a musician.”

The shift in energy is palpable when Abloh enters the private dining room and starts doling out high-fives. “Yes, I’m a high-fiver,” he admits, addressing my look of surprise when our palms meet. As Abloh mingles with his inner circle, food untouched, glass of white wine in hand, phone forever charging nearby, I get the feeling that he never stops theorizing. Between laughter and clinks of cutlery, I hear the occasional Abloh-ism, like “Fashion will hit a wall in five years and refresh itself.” These statements, more succinct than Kanye’s impetuous stage rants but just as self-assured, mean nothing and everything at once.

Despite proffering the five-year theory, Abloh admits that he doesn’t find the future “that exciting of a concept”; in fact, he’s nostalgic for his teenage years. “Take $30 vintage sneakers,” he says. “They’re more relevant than something new because they have the power to evoke a memory.”

After the dinner is the afterparty, which is held in a pitch-black empty art gallery in Parkdale. Abloh is DJing, lit by the glow of the cellphones from the tight huddle around him. He looks as in command as he did earlier at his store, showing off a hoodie made out of flocked sequins and sharing his thoughts about the fluidity between masculine and feminine in his designs.

I’ve been in Abloh’s orbit for nearly 12 hours, and it’s time to go back to earth. On the way home, I remember that I’ve run out of milk. (Would that be “Milk” in the Off-White universe?) As I walk out of a convenience store, I cross paths with a young man in an Off-White bomber. A coincidence, sure. But maybe this sighting proves Abloh’s point: “Every generation asks for what’s next. I think we’re seeing it.” Abloh might just hold the keys to the gates of new luxury. All he needs is a Mophie.

Interior of the Off-White store in Toronto Image by: Brent Goldsmith

This article appears in the September 2017 issue of ELLE Canada.