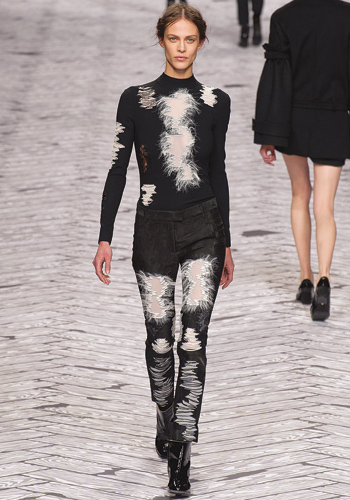 Viktor Horsting and Rolf Snoeren are not the kind of fashion people who coo over your shoes or chirp away about Twitter. For all the fairy-tale theatrics of their runway shows, the Dutch designers are poised and thoughtful in person, with a reserve that is polite but firm. When asked if the look of their new Paris flagship will mimic the upside-down aesthetic of their former Milan boutique—which featured parquet ceilings and chandeliers shooting up from the floor—Horsting gives a slight shake of his head and says quietly, “That has been done.”

The drive to continually move forward has been Viktor & Rolf’s signature since the designers met as Amsterdam art-school students more than 20 years ago. It’s how they have been able to transform their line from experimentalist Euro fringe player to global fashion brand, complete with a robust portfolio of fragrance and accessories, including this season’s “Bombette” bag, carried by everyone from Cate Blanchett to Selena Gomez. It’s what makes their take on the white shirt feel fresh, season after season. And it’s why, even though anniversaries might traditionally inspire a retrospective mood, the duo prefer to think of their milestone as simply “a new beginning.” “Nowadays, we’re very interested in reality,” explains Snoeren over the purr of piano music in a Toronto hotel lobby. “We’re no longer so interested in the meandering of the spirit.”

Really? This from the fantastical, boundary-pushing designers who, in 1996, three years after launching their line, sent out a “virtual” fragrance to the world’s top editors in a bottle that couldn’t be opened? Viktor & Rolf’s rebel cred only grew with its avant-garde fashion presentations. For “Russian Doll,” the famous fall/winter 1999 couture show, Horsting and Snoeren layered all nine looks on top of one another on a single model, like a matryoshka doll in reverse. Fall/winter 2005’s “Bedtime Story” featured Tori Amos, in red satin pyjamas, crooning at a grand piano while models sauntered by, their gowns twisted like bedcovers, hair spread across the attached white pillows like expressionless Sleeping Beauties.

But Viktor & Rolf’s fall/winter 2013 collection represents something new: a more practical form of the designers’ sartorial poetry. “We wanted to create something for a chic rebel,” says Snoeren about the back-to-basics direction. “It’s classic but with a Viktor & Rolf version of rock ’n’ roll sensibility,” he adds, citing pants that look like they’ve been slashed by Wolverine. “Up close, [the tears] are delicately embroidered with lace. It’s a surreal transformation of ripped jeans into something elaborate and couture-like.”

Commercial yet cool—it’s a surprisingly fitting description for the brand, which, in 2008, was snapped up by Renzo Rosso’s Only the Brave designer conglomerate, which also owns controlling stakes in Marni and Maison Martin Margiela. How do such
sensitive designers balance art and commerce? “It’s not always easy,” admits Horsting. “People have expectations—they tend to see you a certain way. If you want to do several things, you have to fight. It would be easier to do exactly as expected.”

The best FASHION ADDRESSES IN PARIS

Instead, Horsting and Snoeren have relied on instinct since they left Amsterdam for Paris in 1992 and moved into a seventh-floor walk-up without electricity. (A possibly apocryphal story has them overwhelmed with inspiration, starting to sketch amid piles of unopened boxes.) Against many odds, they have succeeded in making strangeness seductive. In 2006, they brought their conceptual verve to a mega-selling H&M collab, and in 2011 they released Fairy Tales, a book of surrealist stories featuring characters like Candy Floss, who is bullied because of her orb of incandescent-pink hair. Then there is Dolls, a Luminato Festival installation of 60 porcelain creations, which the duo are in Toronto to discuss. Horsting describes them as both “our children” and “the creatures of our soul.” He cites their inherent menace as the key to their allure. “They’re not cute; they’re not huggable.”

Which could also be said about the designers themselves. For all the freedom they exhibit in their projects, it’s as if they strive for a public persona that is almost bleached of personality. This also extends to their Twitter feed, which is an exercise in pure marketing, offering a meticulous account of stars like Jennifer Lawrence spotted wearing their clothes. Recently, though, there was a sweet, sad tweet from Horsting about the death of their dog, Vicky: “It happened peacefully and quietly,” with a photo of a Jack Russell terrier sitting on a rumpled bed. It’s an example of humanity that is ever present in their work and that Horsting and Snoeren clearly find in each other. “To imagine doing this alone, that would be horrible,” says Horsting. The designers share a glance. “In a way, it’s like we’re married,” explains Snoeren. “Our work is the most important thing in our lives. To share that is so special.”

Create your one-of-a-kind sneaker design for a chance to win $5000, thanks to Aldo.

From low-rise jeans to rhinestoned belts, the campiness of early 2000s fashion is back—but this time, with an empowering twist.

Come each new season, past trends give way to new ones, bringing in a wind of change to our wardrobes. And this fall is no exception.

If There’s Anything Designer Alexandre Faulkner Knows Intimately, It’s the World of Fashion