No need to visit a museum to ooh and aah over rare haute couture. 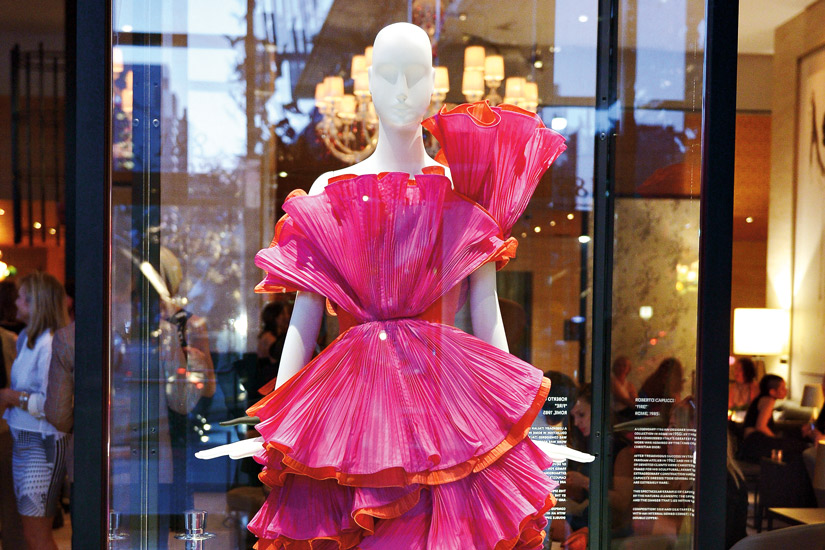 Four famous gowns have taken up residence in the lobby of Toronto’s Shangri-La Hotel. The dresses, which are housed in custom illuminated vitrines, were acquired from London-based boutique William Vintage.

There’s a YSL number from 1983 (it’s one of only three ever made; the others are at the YSL archives in Paris and the Met in New York), an embellished Bob Mackie creation (worn by Sharon Stone in the film Casino) and a dress made of layer upon layer of magenta pleats by couturier, and Dior contemporary, Roberto Capucci.

Speaking of Dior, the final piece is a Christian Dior cocktail dress from 1958, made of 42 satin bows and designed by a then 21-year-old Yves Saint Laurent.

“I like to say that this is the only place in the world where you can have a martini and cheeseburger while you admire couture,” says William Banks-Blaney, founder of William Vintage, of the Shangri-La lobby.

New dresses will periodically make their way into the display cases, and another installation is set for Vancouver’s Fairmont Pacific Rim Hotel later this year. Book a stay, or simply pop in for a drink to get a look.