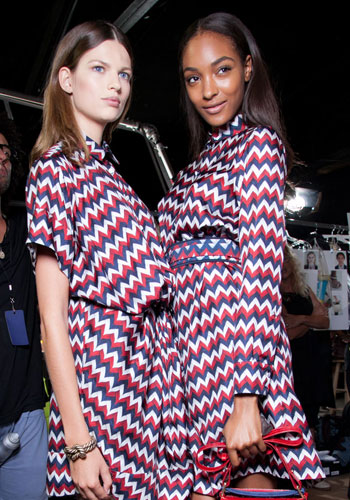 Tommy Hilfiger is recalling his life as an 18-year-old preppy kid roaming Cape Cod. It was the summer of ’69, and he was obsessed with the technicolour glamour of the freewheeling folks sporting bell-bottoms and other tokens of radical chic.

"I remember thinking ‘It looks like a lot of fun to dress like a rock star or a hippie,’" says the designer, now 62, with a grin. Later that year, in his native Elmira, N.Y., Hilfiger opened People’s Place – a shop stocked with fringed vests and eight-track tapes that catered to the crowd who had inspired his own beat-up sandals and grown-out mop.

In the end, the hippie look didn’t last long for Hilfiger, but his summer by the sea sparked an enduring fascination with nautical chic, the bedrock of his eponymous mega-brand, launched in 1984.

"Being on the open water is very, very calming and inspiring," explains Hilfiger, sitting cross-legged in jeans, a checkered-blue collared shirt and a navy blazer, his salt-and-pepper hair boyishly slicked to one side.

We’re in the brand-new Tommy Hilfiger L.A. flagship, which also showcases the designer’s nautical obsession, complete with a white panelled ceiling built to resemble the wooden frame of a ship. Was Hilfiger-with his seafaring disposition – a born explorer?

"Not really, because I was landlocked," he muses. "But I dreamed. Every time I saw a boat, I thought ‘I wonder what it would be like to be on that boat.’ Whenever I saw an old sea captain, I always thought that there was something very endearing about that look."

The Tommy Hilfiger woman has grown alongside the designer, joining his recent jaunts through time (last spring’s retro pop-prep look) and space (the equestrian Fall/Winter 2012/2013 collection, inspired by Greenwich, Conn.).

This spring, Hilfiger translated his signature motif into sun-bleached denim, chunky cable-knit sweaters and airy striped cotton pyjama suits. What does he think of a woman in stripes?

"It makes me think she’s self-assured," he says. "A lot of people look at stripes and think ‘Can I really wear that?’ because it takes someone with a daring attitude to mix them, like smaller stripes with larger stripes. It’s like mixing plaid or patterns – the rule is that you never wear pattern with pattern, but I like women who break the rules."

Hilfiger is accustomed to breaking boundaries: His brand has grown from domestic success to global fashion empire.

"We thought ‘Okay, let’s open a store in London and then in Paris and then in Tokyo,’ and then we became global, sort of by mistake," he explains, shaking his head. "Now we get the road map. The road map is worldwide."

Tommy Hilfiger’s musical tastes
There has always been a rock-star twist to Tommy Hilfiger’s brand of prep: He was a regular on the Studio 54 circuit in the ’70s and even dressed an upstart Bruce Springsteen.

How to wear the HOTTEST SPRING TRENDS