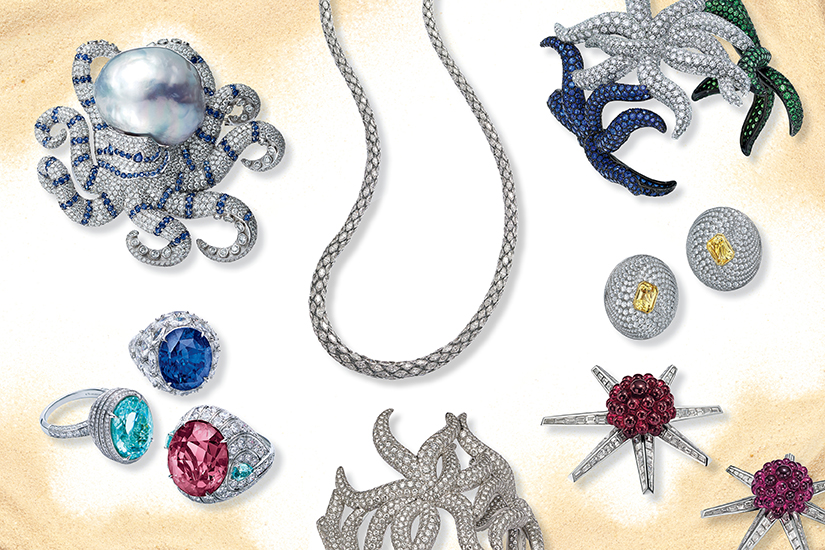 Stinky the octopus is the first to be claimed. He’s the most glamorous cephalopod mollusc you’ll ever see, with coiled tentacles that are speckled with tiny indigo sapphires, plump like droplets of water, and blue eyes to match. His most arresting feature? A gum-ball-size baroque pearl that’s so incandescent it’s hypnotic. This irresistible little creature—given his nickname by Tiffany & Co. design director Francesca Amfitheatrof—is the Rolls-Royce of fine jewellery. He’s also just one of over 200 pieces in this year’s highly coveted Blue Book collection. But now this $221,000 gem is gone—sold the moment he made his debut. Good thing I didn’t get too attached!

Not that I ever really stood a chance at owning Stinky. The buyer list for Tiffany’s Blue Book collection includes only top customers from around the world who are flown to New York for private appointments. There is no bidding or negotiating; this is a first-invited, first-served affair for the company’s biggest clients. Jon King, Tiffany’s senior vice-president, tells me that it’s not unusual for clients to come to this annual event with the pieces they want to buy already marked in the catalogue. “They’ll come in and toss the book on the table with a Post-it note on a page and say ‘I want that one,’” he explains. But for those who need guidance, John Loring, who was Tiffany’s design director from 1979 to 2009, has some priceless advice: “People will always say ‘What piece of jewellery shall I buy?’ I say ‘Well, the one you like; what other one would you buy?’”

The thing is, all the Blue Book pieces are out-of-this-world spectacular. They’re so luxurious that they practically defy categorization. Case in point: the $3,282,000 engagement ring that Amfitheatrof reimagined as a Blue Book piece to celebrate the 130th anniversary of the iconic Tiffany setting. The six-prong signature design was created by the company’s founder, Charles Tiffany, in 1886. At the time, it was customary to low-set the diamond in the band, which meant that its shine was dampened. Positioning it above the band showcases the diamond’s maximum brilliance. Today, it remains the bestselling Tiffany engagement ring. Amfitheatrof used the raised-setting design, but she supersized the gem to an internally flawless round brilliant-cut 8.55-carat diamond and added a round-diamond pavé to the band.

Considering the technical merits and rarity of a gemstone are just part of Amfitheatrof’s approach to designing the collection. “I get a vibe from stones,” she explains. “Some are moody, and some are happy. I think that a stone has a character that can come across. There also has to be rhythm, drama, poetry and moments of quietness and sensuality in the design.” And—surprisingly—Amfitheatrof insists that her pieces be practical. She picks up a diamond-encrusted platinum rope necklace to demonstrate how it ebbs and flows. “It’s absolutely liquid,” she says, as she twists and curls the piece, like a garden snake, in the palm of her hand. It’s so pliable that it’s hard to believe it’s made up of 776 diamonds, but it took years of engineering to get it to move just so. “This is a piece that could be worn with a pair of jeans or a beautiful evening dress,” she says. It’s a sentiment that rings true for King as well. “Modern women want pieces that are at once glamorous and relevant,” he says.

What Amfitheatrof is doing—as Tiffany’s first female design director—is reinventing the way we think about fine jewellery. By considering wearability, she is changing how luxury is experienced. The fact that she’s also thinking about how these pieces will translate as heirlooms many generations from now, giving them value that isn’t limited to their price tags, is a sign of changing times.

It was the most bizarre, socially distanced season ever, where models wore masks, the audience dialed in via Zoom and a strange post-apocalyptic aesthetic emerged that showed us both darkness and light.

Better Together: Miuccia Prada and Raf Simons Are Designing for the Future of Fashion

Miuccia Prada and Raf Simons—two bona fide greats in their own right—have joined forces as Prada’s co-creative directors beginning with the spring/summer 2021 season.

The Puffer Coat: A Cult Winter Piece That’s All About Volume, Comfort and Style