This Fashion Collaboration is Museum-Worthy

Inside the new COS collaboration with Canadian artist Dorothea Rockburne. 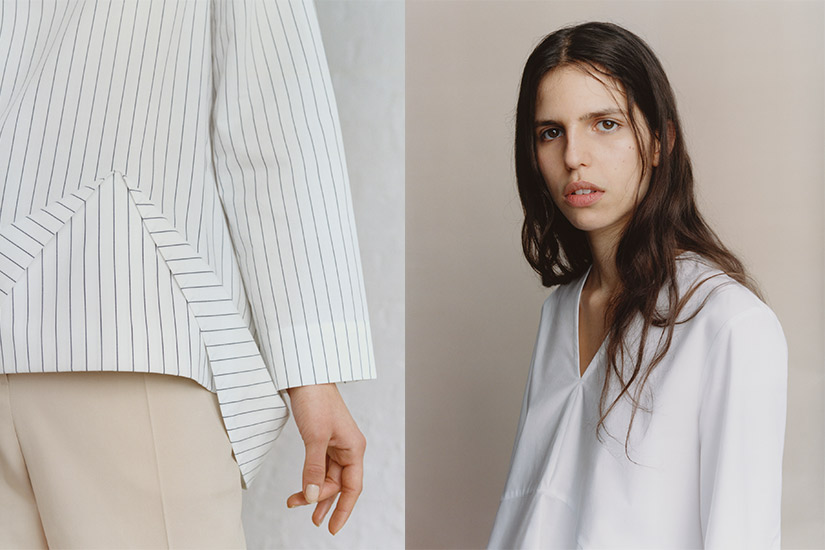 With its high ceilings, bright-white and wood-panelled walls and artful organization of merchandise, the New York COS flagship on Fifth Avenue has always reminded me, an art school grad, of a gallery. Never more so than on my most recent trip to the store, in May, when the brand debuted its spring/summer collection, which includes pieces inspired by Canadian-American artist Dorothea Rockburne.

Rockburne is renowned for her intricate mathematical, origami-like works. And as I peruse the racks, it’s easy to admire the way COS — a brand known for its elevated minimalist pieces — translated her textures of crinkled paper, oil, grease and tar into wearable garments, like a deliberately wrinkled backpack and a sculptural pinstriped cotton blouse. “We really liked her approach to working with simple materials and giving them a coating and a finish that makes them feel a little bit more starched,” Karin Gustafsson, COS’ creative director, tells me later over drinks at the Carlyle Hotel. This collab is only part of the fashion brand’s story. COS has sponsored the new Rockburne exhibition at the Dia Art Foundation in Beacon, upstate New York, which showcases the now 85-year-old’s seminal works from the late 1960s and early 1970s, including the Ineinander paper series, which served as COS’ inspo for the collection.

The brand, based in London, England, has a rich history of supporting the arts — whether it’s using what’s on our walls to inspire what’s in our closets (such as sponsoring an Agnes Martin retrospective at the Guggenheim, a partnership that also resulted in a limited clothing release) or helping build hype around a name or an event. In the past three years, for example, the label has teamed up with buzzy artists like Phillip K. Smith III and Studio Swine to create installations at Milan Design Week. “We’ve always done a lot of research in art because we believe that it makes us think and it challenges us,” says Gustafsson. “But it also makes us evolve our process and our approach to creating a collection.”

Such creative osmosis is quite common between fashion and art. (We see you, Elsa Schiaparelli’s Dalí lobster dress from 1937.) But over the past two decades, collaboration has become key. Louis Vuitton led the pack when it teamed up with Stephen Sprouse on a bestselling line of leather goods in 2000. More recently, the fashion house and Jeff Koons joined forces for its Masters collection, which featured iconic works of art, by artists like da Vinci and Van Gogh, on luxury handbags.

In 2016 and 2017, Dior invited artists, like Namsa Leuba and Mat Collishaw, from around the world to reinterpret its iconic Lady bag. Calvin Klein has a four-year licensing agreement with the Andy Warhol Foundation for the Visual Arts that allows the company access to the late artist’s broad portfolio. For spring/summer 2018, Warhol’s photographs and prints appeared on everything from dresses to coats. Donatella Versace also channelled Warhol, reissuing her brother’s iconic pop-art-themed pieces for a special collection commemorating two decades since Gianni’s passing. Prada reunited with Taiwanese-American artist James Jean, whose art-nouveau-esque lilies and charming rabbits adorned its 2018 Resort collection. American label Coach licensed some of Keith Haring’s playful works, which appeared on the brand’s spring 2018 leather goods, continuing its move toward the luxury high-fashion market that was once solely occupied by its Italian and French competitors. There has also been an increase in fashion designers achieving status in the art world through their avant-garde creations — the literal wearable art of Gareth Pugh and Aitor Throup come to mind.

So why now? The relationship certainly benefits both disciplines: It lends mass popularity to the artist while giving a higher cultural status to a fashion object that would normally be considered transient. “What you have here is an effort to enlist art for the purpose of giving a label a certain level of prestige,” says Adam Geczy, an art theorist and co-author of Fashionable Art, which examines the intersectionality of art, commerce and culture. Another potential reason these collabs are ubiquitous is simply that art has become more mainstream. Take the recent run of Yayoi Kusama: Infinity Mirrors at the Art Gallery of Ontario: It had online wait times of up to 13 hours for ticket buyers, causing a city-wide Kusama frenzy. (Kusama, of course, collaborated with LV back in 2012, a move that may have made her a household name.) It has also become fashionable to be a patron or an appreciator of art. Art Basel Miami Beach, for example, has become the place to be seen, akin to a major fashion week — last year, 82,000 people attended the four-day event.

Fashion is, of course, a business, and profit is the goal. As such, there will always be critics who are concerned about the overcommercialization of art. “I am certainly quite wary of that relationship as well and very careful about how we enter into it,” says Jessica Morgan, director of Dia Art Foundation, who helped spearhead the Rockburne-COS project. Morgan is, however, proud of Dia’s association with COS and the subtle way Rockburne’s aesthetic was manifested in the looks. She sees the possibility of the two disciplines blending even more closely together in the future. “I actually think it quite possibly will happen, and it’s really awesome in my mind,” she says. “It’s sort of the same as design and architecture fusing in a similar manner.”

After spending a day at the Dia with Rockburne’s works, I find myself in the change room with four or five pieces from the capsule. They are undeniably COS, superbly draped in rich, crisp fabrics. But they do carry a subtle aura of Rockburne — enough for me to feel like I’m wearing one of my favourite works of art. And, chances are, this is the closest I’ll ever get to owning a Rockburne.

This article first appeared in the Summer 2018 issue of ELLE Canada.