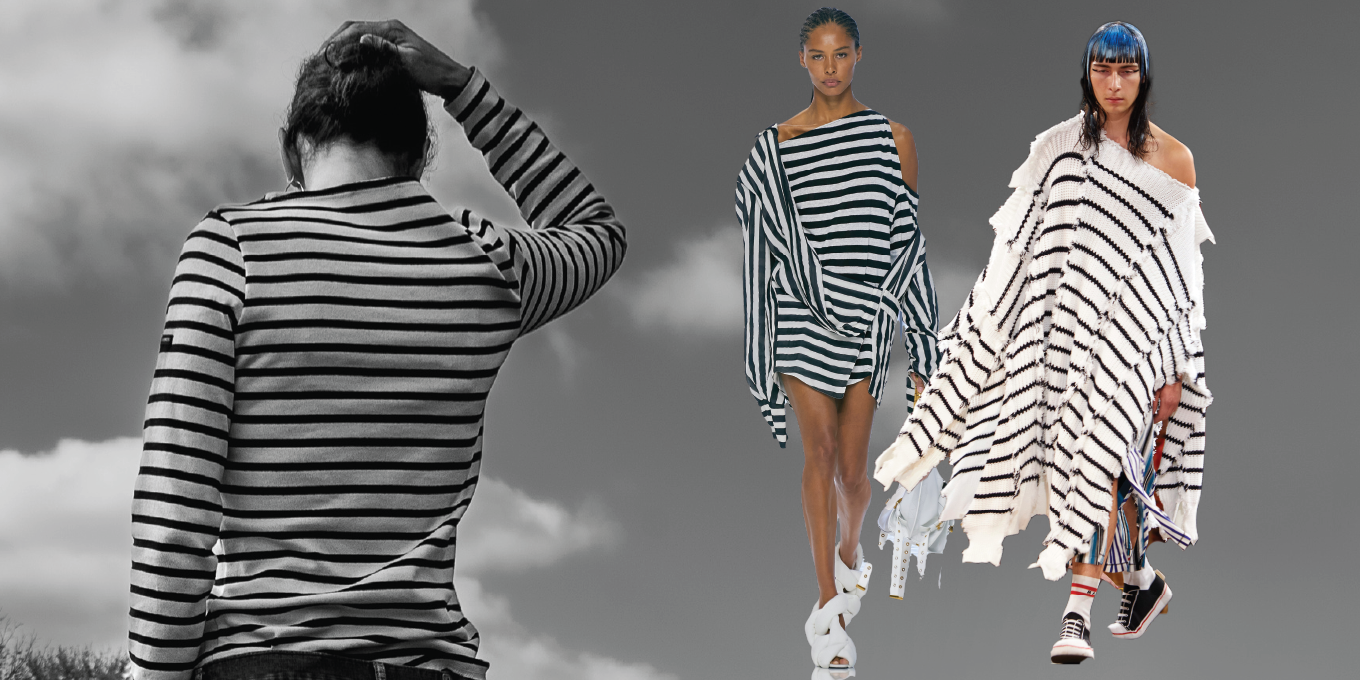 At first glance, la marinière—also known as the “sailor shirt”— isn’t a key element in the spring/summer 2022 skin-baring, early aughts-influenced season. Yet, upon closer look at the collections, Marni’s two-tone dresses, Chanel’s striped blouses and Balmain’s contemporary black-and-cream tops and dresses all reflect the very obvious feature that distinguishes the sailor shirt from any other garment—and anchor it in the archives of fashion. Even Montreal based Room 502 designer Sophie Theallet recently had fun reworking the piece for Saint James, the French brand that has been synonymous with sailor shirts since 1889.

In the 19th century, the striped sweater—originally an undershirt was worn by the sailors of the French Navy so they could be easily spotted in case of an accident at sea. In 1858, it was decreed that this indispensable part of their uniform must have 21 white horizontal stripes that were each 20 millimetres wide and 20 (or 21) blue stripes at 10 millimetres wide. Legend has it that the number 21 corresponds to Napoleonic victories against the British, but the explanation has more to do with the weaving technique and the way the fabric was cut, which could add or subtract a stripe to the sweater.

In the 1910s, Gabrielle “Coco” Chanel was vacationing in Deauville, France, when she came across the infamous piece of clothing in a store. The masculine garment, which she immediately adopted into her wardrobe, inspired her to create another: a striped blouse with a sailor collar, which she soon offered to her customers. Experts are divided on the date of her creation, but as early as 1913, Chanel was using jersey—a material that was revolutionary at the time—for this striped top, which allowed women to move more freely.

When Yves Saint Laurent created his 1966 Matelot collection, he was influenced by the sailor top to design sequined striped dresses and chic striped jackets. But the allure for him lasted only one season, unlike for Jean Paul Gaultier, who made the marinière his signature piece. It actually appeared in his first-ever show, in 1976, before becoming an integral part of the label’s DNA with the unveiling of his L’Homme-Objet collection in 1983. Fashion’s enfant terrible loved the seductive aura of the garment and its graphic stripes, which are still present in his pieces to this day. In the ’90s, Karl Lagerfeld paid tribute to the visionary spirit of Coco Chanel by reinterpreting the sailor shirt in his own way. And he’s not the only one charmed by the marinière: Brigitte Bardot, Jean Seberg, Pablo Picasso, Kate Moss and even Brigitte Macron have also fallen for it, making the sailor shirt a timeless piece that continues to make waves.