The duo behind UNTTLD talk mentors, muses and Montreal. 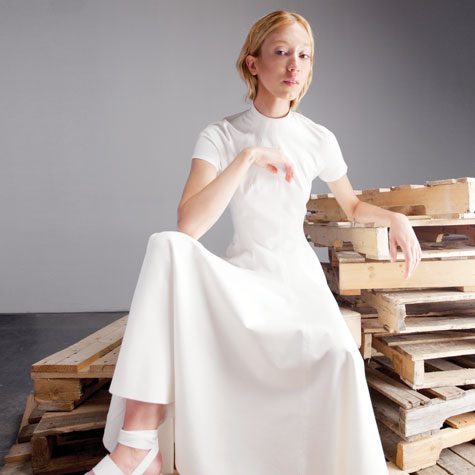 For Montreal designers José Manuel St-Jacques and Simon Bélanger, UNTTLD (unttld.ca) is a labour of love. Partners in life and business, the duo are the dream team behind the label, which won the 2015 Mercedes-Benz Start Up competition earlier this year, beating out a talented roster of Canadians, including Beaufille and Laura Siegel. It’s not the first time St-Jacques and Bélanger have been awarded top honours: In 2010, they were contestants on the TV show La Collection, Quebec’s version of Project Runway. They entered separately in a game of friendly design rivalry. St-Jacques ultimately won the $100,000 prize, which allowed them to launch UNTTLD. Now, thanks to their latest win, they’re ready to take their business to the next level. “We need a CEO,” says St-Jacques. We caught up with the designers, as they prepare to launch their e-commerce site this spring, to talk mentors, muses and Montreal.

Learning Curve
St-Jacques: “Designer Denis Gagnon taught us to screw the rules and do whatever we want.”
Bélanger: “He brought more of an artistic dimension to fashion instead of just making garments, you know? And he was very generous with the techniques he developed. He would share them with us a lot, like how to sew things together and how to make textures.”

It’s a Woman’s World
Bélanger: “We surround ourselves with very intense, opinionated and strong people. And those are the sort of people we like. We don’t like wallflowers. We want to see powerful women, women that own themselves. We try to make women beautiful independent of their shape or size. I know that sounds cheesy, but to us it’s really normal.”
St-Jacques: “We like to dress the psychological woman, not the physiological woman.”

Look and Feel
Bélanger: “[Our clothes] are not art, because that’s what you find at a museum. We express our concerns through our work. We don’t just make clothing that dresses people, because that’s boring. To us, that’s not fashion; that’s just making clothes.” St-Jacques “It’s more than shape. What we like is the emotion. But we also like to work with history, spirituality and traditional costume.”

Home Run
St-Jacques: “What’s great about Montreal is the people. It’s cheap to live here, so you have a lot of free time to do whatever you want to do. There’s a lot of parks, great music, a lot of great everything. That’s very inspiring to us. It’s very easy, and it’s small; it feels like a village. We all know one another, and there’s an energy here that makes it easy to start a project with someone.”

Balancing Act
Bélanger: “Sometimes when you are geared too much toward the commercial, you want to say that you’re just going to be an artist. And then when you’re an artist and you’re not making a penny, you just want to be a designer and sell.”
St-Jacques: “But that’s what I like. In fashion, you have to come up with new stuff and new ideas and question what you’re doing all the time: ‘Why did I do this? Where am I going with this? Who am I talking to?’ It’s not boring at all. I think that’s what I really like: You’re in constant change and progressing instead of redoing the same thing all the time.”

READ MORE:
We catch up with Kendall and Kylie over lunch
Bella Hadid forms a new girl gang for Topshop’s holiday campaign
Maiyet’s Declan Kearney on the true meaning of a modern wardrobe