The best prints for Spring 2012

Everything from delicate blooms to a cacophony of clashing prints are ruling runways this season. Here are our top print fashion trends for Spring 2012. 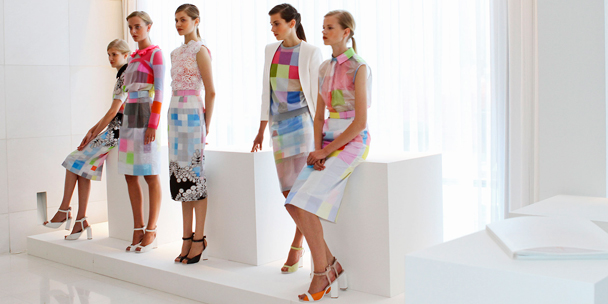 Vivid florals, tropical motifs, geometric zigzags and exotic animals make for some of the most intriguing prints of the Spring 2012 season. The most ingenious ones are oversized, from Proenza Schouler’s large daffodils to Dries Van Noten’s picturesque landscapes. This year also marks a full-on print revolution with many designers collaging several, often clashing, prints together for a very colourful seasonal statement. We have Mary Katrantzou mixing anything and everything in a fun but very dare-to-wear manner. Eager to sport your favourite print head-to-toe? Prabal Gurung and Peter Som are right with you, with their sharp floral suitings.

Print prodigy Erdem created a
palette of ice blue and lemon chiffon yellow, with his entirely floral Spring 2012 collection. Proenza Schouler’s embroidered daffodil print dresses had a vintage feel to them, with the flower referencing 1950s wallpaper and upholstery. Print master Diane von Furstenberg gave us oversized Marimekko-like abstracted florals, in the form of dresses, kaftans and even jumpsuits.

Moving away from the focus on a singular flower and onto the larger picture of natural landscapes, Dries Van Noten envisioned monochromatic nightscapes paired with tropical scenes of turquoise seascapes and lush jungle scenes. Tropics were on Holly Fulton’s mind as well, with dresses featuring the magical underwater world, complete with illustrations of jellyfish and coral. Alberta Ferretti drew on Zulu motifs with oversized jungle elements, making for an eye-catching summer print.

Often associated with the Art Deco era, the chevron or zigzag print is prominent this season. We saw young French brand Carven take this Missoni-esque print from knit separates to sundresses, all with a youthful element. Christian Dior went with a minimal version of the pattern, using it in a monochromatic black and white form for 1960s A-line coats. On the casual end of things, chevron appeared as sheer jerseys in Alexander Wang’s extreme sports-themed Spring 2012 collection.

Try swapping out some tired pieces from your wardrobe for these 6 new spring items (prints included!)

More spring prints straight off the runway, on the next page…

There were two iterations on the animal print: animal patterns and literal animal motifs. We saw the former from Michael Kors’ African safari-inspired collection, with leopard print caftans, zebra dresses, and python swimwear. Missoni moved away from their signature zigzag print and into zebra, which made multiple appearances from knit summer sweaters to maxi dresses. For a literal take on animal, look no further than Mary Katrantzou’s colourful collage of prints, featuring exotic birds and sea creatures.

A few pro-print designers undertook the ambitious challenge of mixing different prints into one look. D&G’s final collection featured foulard prints mixed with florals and polkadots, using all their signature motifs all at once as a final goodbye. Preen combined a CMYK-hued large pixel print with black and white
kaleidoscopic florals. Aforementioned Mary Katrantzou went completely print wild, mixing anything and everything, from scenes from flora and fauna to metallic objects.

For true print lovers, this season is a perfect time to experiment with head-to-toe patterns. One could give their old pantsuit a rest and opt for a floral one, like the sharp purple suit seen at Prabal Gurung’s Spring 2012 runway or the
hyper-coloured Capri suit from Peter Som. For a quieter take, consider Erdem’s pant and blouse combination, mixing soft green and yellow florals on the bottom with red and green on the top—it may sound like it clashes, but it is surprisingly elegant.