One woman tests the latest fashion trend. Could plastic sequined party dresses be the must-have fashion item of the holiday season? 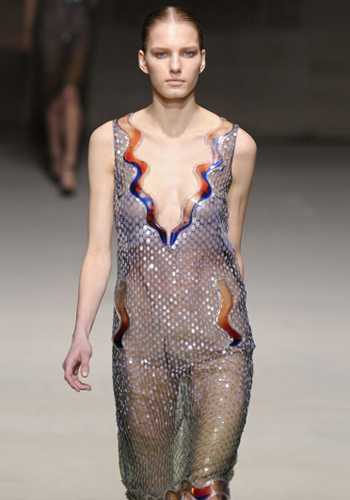 The look: One woman tests the tends of the day.
Trend: Sequined party dresses on holiday.
Who’s doing it? Prada and Christopher Kane.
Trendology: Sequins go all the way back to the ancient Egyptians (who also introduced eyeliner to the human race) and are a showgirl’s best friend. They became a fashion hit in the ’70s with the invention of the sequined disco tube top.

Test drive: When Mr. McGuire says “There’s a great future in plastics” in The Graduate, little did we know that he had foreseen fall/winter 2011/2012. This year’s holiday sparkle isn’t coming from metal or rocks but good ole non-biodegradable plastic. But where I have finessed gold lamé, Swarovski crystals and the subtle glitter of glass beading on little black dresses, this mermaid version of sequins requires consider­able strategizing. One of the Prada dresses, for instance, makes me look like a yellow surgeonfish that has strayed too far from its native coral reef. Not a good colour on me. Instead, I tried on the Prada with the orange sleeveless top and Concord-grape skirt, all in plastic sequins. Even before I had put on shoes or figured out my hair, the outfit elicited excited applause from the junior members of my family.

Nobody wanted to hug me in the scaly dress, though. And speaking of the cold-blooded piscine species, in the absence of tropical temperatures, what sort of hosiery was going to keep me warm? Black silk stockings seemed incredibly boring, but I wasn’t going to go the polka-dot route like they did at Marc Jacobs. I was sort of into these petrol-blue Falke stockings I had just got in the mail and patent-leather Lanvin moccasins. I described this to my friend Johanna over the phone, and she stopped me with a chilling compound noun: “Colour block.” It was like a spring 2011 mantra… and so over. Well, since the dress was so ’60s, we thought massive amounts of backcombing and some Jean Shrimpton-inspired over-the-knee soft black leather boots with a low heel, but I didn’t have such a thing in my closet. My friend Jana does, but she’s a size 6 so that was out of the question.

The Alexander McQueens were too dominatrixy. And the Loeffler Randalls were too stumpy. I settled on sheer, crème-fraîche-hued stockings, these funny Bally flats that look like ballerina brogues and a Mia Farrow wig. I had a drink with my old editor Rebecca before we went to the annual fashion-designer Christmas-tree event at the Louvre. “I’m getting your Mia Farrow vibe,” she said, “but the colours aren’t working. The dress is too dark and the rest of you too pale. If you’re writing about sequins, you should check out Christopher Kane.” I took her suggestion next weekend, when we invited friends over. I had on the same tights, the same wig and the same flats with a totally transparent Christopher Kane sequined party dress that had a green plastic snake detail meandering down the chest. In the interest of decency, I wore a slip under it.

Verdict: 8/10. I have the perfect holiday-party dress look—provided I sit right next to the tree.