How did Michelle Williams end up on the cover of a magazine in redface? 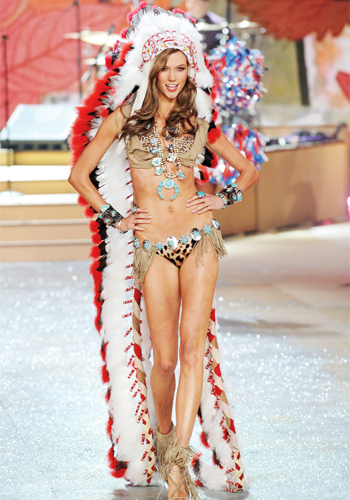 I often feel invisible. When I tell people that I grew up on an Aboriginal reserve, they look at me like I’m a mythical unicorn, even though more than a million people in Canada identify themselves as First Nations, Métis or Inuit. I probably wouldn’t have thought we existed either if I hadn’t grown up on the Six Nations reserve in Southwestern Ontario. Back then, I only saw people who vaguely looked like me on CBC’s North of 60. It was slim pickings as far as cultural references were concerned.

But today, instead of homages rooted in realism like the CBC offered in the ’90s, all I see in the mass market is a shiny commercial version of “Native Americans” rooted in stereotypes from westerns, Disney cartoons and sports mascots.

Last November, No Doubt released their “Looking Hot” video, which showed Gwen Stefani writhing in a teeny buckskin outfit and headdress. The video was pulled after the public let the band know that it wasn’t, in fact, hot (or “hella good”). No Doubt issued the requisite apology, telling their fans that “being hurtful to anyone is simply not who we are.” Within a few weeks, Victoria’s Secret found itself in the same situation when it dressed Karlie Kloss in a bikini and full headdress for the runway grand finale—even though the headdress is revered and intended for respected leaders. Victoria’s Secret apologized and agreed to remove the look from the broadcast version of its show.

Jeremy Scott—whose slave-inspired “shackle” sneakers were pulled by Adidas last June—released a questionable spring collection (for Adidas Originals) that features distinctly cartoonish references to totem-pole carvings. To Pacific Northwest Aboriginals, totems symbolize the important history of community and family. To Jeremy Scott, they seem to signify nothing more than a funky new pattern for A$AP Rocky and Rita Ora to wear.

It’s disheartening that so few people are aware that headdresses, bonnets and totem poles are still spiritually relevant to vibrant Native cultures. To glamorize—or make light of—the misuse of dated and cartoonish images is to support a legacy of genocide and racism. The after-the-fact apologies aren’t enough. While groups like No Doubt may say they never meant to “offend, hurt or trivialize Native American people, their culture or their history,” they did.

How can anyone assume that referencing “Indian” motifs without care or caution wouldn’t be hurtful, trivial or, indeed, racist? I was dumbstruck when I saw the spring/ summer issue of AnOther Magazine. The biannual fashion and culture publication photographed Michelle Williams wearing black braids, a sad expression and what could arguably be considered redface. (Imagine your reaction if she’d been wearing blackface and cornrows.) In response to an immediate backlash, the magazine echoed those other apologies, writing “While we recognize the seriousness of this debate, the image in question in no way intends to mimic, trivialize or stereotype any particular ethnic group or culture.”

They added that the concept for the shoot was to have Williams dressed as “imaginary characters.” To quote American filmmaker Jim Jarmusch in the Canadian documentary
Reel Injun, “That is a genocide that occurred, and the [American] culture wanted to perpetrate the idea that these people are now mythologic, you know, they don’t even really exist, they’re like dinosaurs.”

Adrienne Keene, whose popular blog NativeAppropriations.com brings many cases of stereotyping and appropriations to light, tackled the issue of present-day invisibility in a letter she wrote to Paul Frank after his Fashion Night Out bash last September. (The designer held a “Dream Catchin’ Pow Wow” party that featured neon tomahawks, feather headbands, bows and arrows, and signs at the bar that read “Pow wow and have a drink now!”) “When society only sees us as the images you presented, it means that our modern issues of poverty don’t exist; nor do our modern efforts like schooling and economic development through sovereignty and nation building,” explained Keene. “We have sophisticated tribal governments and communities, but how will we be able to be seen as modern, successful people if we are continually represented through plastic tomahawks and feathers?”

Her blog and others, like Dr. Jessica R. Metcalfe’s Beyond Buckskin, as well as Facebook and Twitter, have given the mic to Aboriginal voices who are understandably critical of these distorted cultural representations. The #IdleNoMore hashtag—the most promising social-media development to unify and mobilize Aboriginals across the country—was created to protest a number of Canadian bills that undermine environmental protection and indigenous sovereignty. Using social media, people are able to gather in city centres, malls and more. While everyone may not agree with the protests, it certainly makes it harder to forget that we coexist in cities and on reservations, that we have a modern, vibrant culture. It gives me hope that, soon, these anemic after-the-fact apologies won’t be necessary because everyone will understand that we’re not extinct and we’re not folkloric characters. We’re people.