Fashion inspired by the Far East—kimonos, obi belts, dragon embroidery—ruled the spring 2013 runways. But does the Asian fashion trend cross the line? 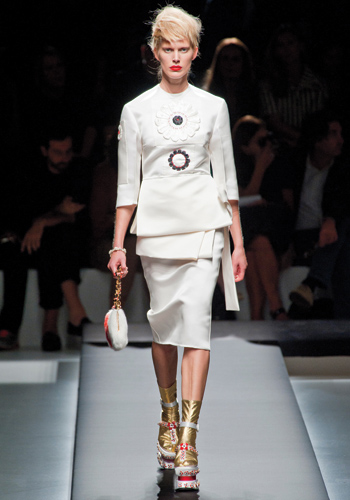 But considering it was mostly Caucasian designers presenting these Far East looks on white models (for example, only about 10 percent of models on runways at fall/winter 2013/2014 New York Fashion Week were of Asian descent), where is the line between inspiration and appropriation?

Well, some say it’s evident. Mimi Nguyen, associate professor of women’s and Asian American studies at the University of Illinois, told The Wall Street Journal that geisha-inspired pieces are costumey— and offensive. “It’s a way for white women to borrow a racially exotic edge for a moment’s play,” she explained. So I wondered if this trend is shaded with orientalism. Not familiar with the term? Literary critic Edward Said used the term in his influential volume Orientalism (1979) to describe the condescending imperialist belief that the Orient is a mysterious and less-civilized place. The term—once applied to Parisian couturiers like Jean Patou and Coco Chanel, who were inspired by the Far East in the ’20s—refers to a stereotypical way of thinking about the “Orient” as an unchanging abstraction, compressing all of Asia into one romantic notion.

TRAVEL guide: Our black book of the top ASIA addresses

“There have been too many geisha girls and dragon ladies on the runway in recent years,” suggests artist and fashion designer Jacky Tsai. Currently based in London, the Shanghai native moved to England to complete an M.A. in illustration at Central Saint Martins. (Tsai made his mark on the international fashion scene when he created the memorable floral skull artwork for Alexander McQueen’s feted spring/summer 2008 show.) In Tsai’s opinion, this season’s Asian trend lacks original inspiration and relies on lazy stereotypical imagery. “Sometimes, it seems just about copying and pasting Asian patterns from book to fabric,” he says. “No one will dig out the profound meaning behind any symbolism. Even most young Asian consumers don’t bother; they only follow the fame of the brands.”

In China, for example, white is unambiguously and exclusively the colour of mourning, worn traditionally only to the funerals of close relations. (The superstitious believe that slipping into head-to-toe white on any other occasion could bring ill fortune to one’s family.) While watching Emilio Pucci’s Indochina-inspired white heavy spring/summer show, I was reminded of the warnings my Chinese parents drilled into me. “It did run through my mind that Pucci’s use of white was odd,” agrees Stephen Wong, co-designer at Canadian womenswear label Greta Constantine, who is third-generation Chinese.

However, Sarah Rutson, fashion director at Hong Kong’s Lane Crawford, is stocking the collection with confidence that the luxury department store’s clientele won’t be bothered. “Women are more apt to say they don’t wish to wear something in white if it looks too much like a nurse’s uniform, not for other reasons,” she explains. “
Pucci is successful for us, so we buy with our market in mind.” After all, the Asia-Pacific region is a monolithic market for luxury goods that continues to grow. “Being ‘too close to home’ is relevant in many parts of the world, not just Asia,” says Rutson. “Getting inspiration from different parts of the world is wonderful, but it’s important that designers don’t go down a literal path.”

Oriole Cullen, fashion and textile curator at London’s Victoria and Albert Museum, agrees that designers like
Dries Van Noten—who plumed the museum’s impressive archive of Asian artifacts and textiles while preparing for his fall/winter 2012/2013 collection—have a justifiable fascination with Asian culture. “Take away the mystery and the allure and look at the beautiful textiles and the amazing shapes of native dress,” she says. “It makes sense that designers are continually drawn to Asia as a point of inspiration.”

Susan Scafidi, fashion law professor and author of Who Owns Culture? Appropriation and Authenticity in American Law, has a simple rule of thumb to gauge the line between inspiration and imperialism: Consider sacredness and similarity. “Tread lightly when the cultural product in question is particularly important for religious or other reasons— or when the item is a close copy,” she warns. “You risk stepping into a cultural quagmire.” That’s why it’s important to note that kimonos, for instance, are commonly worn as part of daily life and have no religious weight. “But nobody wants her culture to become a costume,” she says. “For designers and fashionable consumers, the challenge is to borrow respectfully and transform intelligently.”

Check out the history of orientalism on the next page…

Wong agrees. “Designers tend to have a very romantic view of things,” he says. “They take stereotypes, they take the traditional old ideals of what a culture is, and develop on that. As long as the design isn’t a carbon copy, it shouldn’t be insulting in any way. It’s a starting point.” That’s where
Haider Ackermann’s chic interpretation of obi-belt cinching differs from, say, Katy Perry donning a tight neon mandarin-collar dress accessorized with a cartoonish paper umbrella at the 2011 MTV Movie Awards—or the eroticized stereotype portrayed by cinema’s original “dragon lady” Anna May Wong in
Shanghai Express (1932), which was revisited last year with little nuance by pop singer Rihanna for her controversial “Princess of China” video (rather troublesome since
Shanghai Express is now used as an academic reference for pop culture’s stereotypical portrayal of Asian culture).

TREND REPORT: The top looks, models and moments from SPRING 2013

So thoughtfulness (and a little nuance) is the key. “Avoiding offensive cultural misappropriation is a lot like etiquette,” says Scafidi. “The more you know, the less likely you are to inadvertently offend. Those rosary beads in a vintage shop are not just a cool necklace, so pairing them with bracelets and a leather jacket could send the wrong message—or, if you are Madonna and were raised in a religious household, turn into an expression of rebellion. The difference is awareness.”

Tsai assents with a sigh. After all, he has seen it all before. “The feeling is exactly like when I go to a popular Chinese restaurant in London,” he says. “The food might look the same, but the flavour and the spirit behind it are not.”

The history of Asian fashion

The exchange between East and West wasn’t always a onesided affair. In the 18th century, China and Japan recognized foreigners’ taste for the Orient and supplied overseas retailers with ornate Asian textiles that fed into romantic visions of Eastern culture to satiate Western demand. Asian merchants controlled the narrative. Liberty London— Britain’s iconic shop turned luxury emporium—was among those early European importers and actually began its retail business in 1875 by selling ornaments, objets d’art and fabrics traded from the East. After the Second World War and the Chinese Revolution of 1949, the trade relationship between the East and the West stalled. “This ‘oriental’ woman we see in fashion now has a 1930s feel about her because up until that point, it was quite an equal relationship,” explains Oriole Cullen, fashion and textile curator at London’s Victoria and Albert Museum.