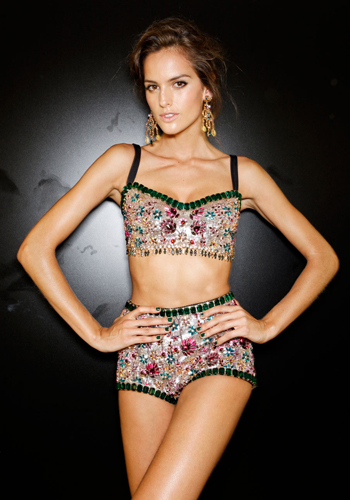 Empower yourself and release your inner bombshell with sizzling spring style. Take inspiration from the industry’s most seductive collections – think baubles, dresses and barely-there lingerie.

The dress
For Dolce & Gabbana, this season’s inspiration came by way of Sophia Loren; for Rachel Zoe, it was Brigitte Bardot. Emerging fashion talent Anthony Vaccarello chose photographer Herb Ritts’ iconic images of ’90s glamazons (Helena Christensen, Cindy Crawford) as his spring 2012 starting point. “A modern bombshell is someone who is sure of her body,” says Vaccarello, citing Anja Rubik, Lou Doillon and Gwyneth Paltrow as his muses. “I don’t like obvious sexiness. It’s more a question of attitude.” Of this mega-sexy frock (far left), Vaccarello says, “I wanted a dress that you could wear like a swimsuit.” Poolside, one assumes.

The lingerie
Christina Remenyi believes that lingerie is the “secret weapon” in every woman’s wardrobe. “Knowing that you are wearing something beautiful under your clothes can translate to a more empowered sense of self-confidence,” suggests the designer of Fortnight Lingerie, the handcrafted lingerie line that launched in Toronto in 2010. Remenyi praises the “femininity and confidence” of contemporary stars such as Léa Seydoux and Maggie Gyllenhaal. “Today’s bombshell has more freedom to express herself through style and personality,” she explains.

The jewellery
Every bombshell loves a bauble, and Van Cleef & Arpels, the French jewellery company founded in 1906, is often called upon to supply a shot of sparkle for the world’s most legendary women. Famous fans have included Ava Gardner, Elizabeth Taylor and Marlene Dietrich, whose customized red-ruby bracelet twinkled through Hitchcock’s Stage Fright (1950). “Jewellery attracts attention,” says Nicolas Luchsinger, vice-president of retail operations. “If one does not wish the attention, one should not wear it.”