Get ready to buckle up — the belt takes on a major fashion trends role for Spring 2012. 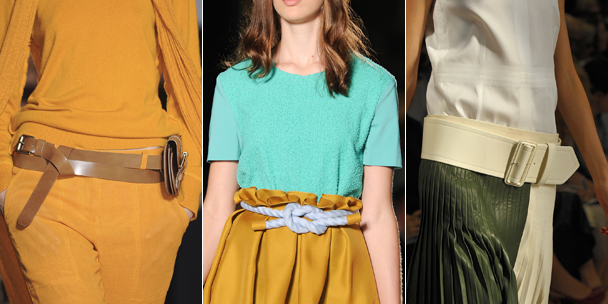 The basic belt was no where to be seen this season, and we wouldn’t say that’s a bad thing when it comes to fashion trends. Quite the opposite – several designers are offering fresh interpretations on the classic belt. We saw wide corset-like waist-cinchers at Alexander McQueen, and on the opposite side of the spectrum, loose and low, hip-hugging belts at both Céline and Chloé. Michael Kors and Givenchy gave us new versions of the utility belt. Joseph Altuzarra showed us that safety clasps can be really chic, with his sporty nylon webbing belts. Roksanda Illincic and Matthew Williamson had sailing on their minds with little rope belts accenting their breezy spring collections. And Peter Dundas gave us Emilio Pucci’s signature prints in soft and silky belt forms. Of all the fashion trends to come from the Spring/Summer 2012 collections, adding a new belt could be the easiest way to update your wardrobe.

The corset belt
As seen at: Alexander McQueen, Burberry Prorsum

Very thick, waist-cinching belts bring corsetry to mind. Having been featured prominently by Sarah Burton in Alexander McQueen’s Spring 2012 collection, her belts were seductive, with curves designed to follow the woman’s body and accentuate the wasp-like waist. On the opposite side, Christopher Bailey took on a more casual design, with wide woven leather belts cinching the summer versions of the famous Burberry trench.

The hip-hugger belt
As seen at: Chloé, Céline

Low-slung belts have that carefree, boyish charm. Paired beautifully with wide-leg trousers at both Chloé and Céline, this hip-hugging belt elongates the torso, giving one a more masculine silhouette. On the other hand, both designers also played up the feminine side, pairing it with dresses and skirts for a drop-waisted look that recalled the 1920s flapper figure. Either way, there is a certain effortlessness tied to this loose look.

The rope belt
As seen at: Roksanda Illincic, Matthew Williamson

Easy, breezy and summery, rope belts bring sailing to mind. This nautical detail was prominently featured in Roksanda Illincic’s Spring 2012 collection, where it appeared in a broad array of colours, tied together in the front with an ingenuous sailor’s knot. Matthew Williamson also had sailor chic in mind, with sunny leisure suits cinched with black rope belts with long tassel end detailing.

As seen at: Altuzarra

Somewhat resembling a seatbelt, and in some cases a parachute strap, many incarnations of the safety belt appeared on Joseph Altuzarra’s Spring 2012 runway. Sometimes monocromatic, sometimes two-toned, and sometimes mixed with a
floral Hawaiian print, it was paired up with little sleeved A-line dresses, adding an element of toughness.

As seen at: Michael Kors, Givenchy

It’s a belt and a bag combined. Sound familiar? We used to call it a “fanny pack” but now it’s graduated to more sophisticated sounding names like “the belt bag” or a “utility belt.” This hands-free wonder was prominent in Michael Kors’ safari themed collection, where models sported stylish khaki ensembles coupled with utilitarian belt bags. We also saw a more urban interpretation of the belt bag at Givenchy’s sleek and minimal runway, where little pouch bags were suspended on a thin low-slung chain belt. The “fanny pack” never looked so chic.