Novelist Lisa Moore uses Fall 2014's fairy tale runway trend to write a whimsical story you're sure to fall in love with. 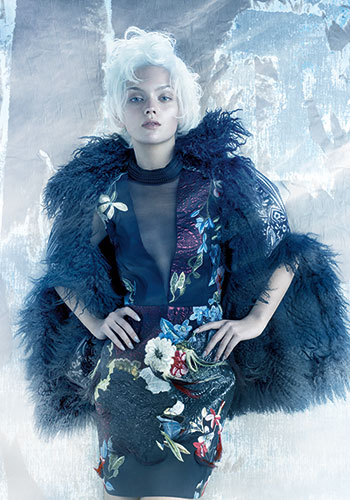 The storm began on the eve of the winter solstice. The first snowflakes were fluffy and torn at the edges. They sailed up on the crests of gentle night breezes and slipped back down, and then up again, before they touched the black earth and dissolved.

A young wood faerie stood at the edge of the cliff and watched an approaching cruise ship. Gusts of snow erased the white ship entirely, but it reappeared as it pulled out of the fist of the storm that was racing toward the island. The ship’s lights twinkled in the darkness like tiny diamond chips – glass slivers – in the cheapest of engagement rings.

That afternoon, the Faerie Queen had summoned the young wood faerie to her throne and sent her on a mission. She was to sprint through the frost forest to the grotto of stones, a natural cathedral of granite at the centre of the island, where, it was rumoured, Cupid’s flower could be found.

The island had once been a whaling station, centuries ago, and at that time its beaches ran with blood and blubber and glistened with the blankets of blackflies that fed on the spoils. But whaling was eventually abandoned, and the island was now overrun with silver foxes and walruses and snowy owls and polar bears – and faeries, who were addled by loneliness and crazy for love.

MUST-READ: The allure of the FASHION FAIRY TALE

Meanwhile, far away, on the other side of the world, in the deepest part of the ocean, a monstrous jackhammer of boiling lava had punched through the mantle of the earth’s crust.

A geyser of orange boulders and liquid stone shot up through the water, ploughing toward the stars. The air melted around the pillar of fire as it broke the surface of the ocean. Shimmering curtains of crimped and glassy heat rippled across the horizon. An empty bowl formed in the ocean, and water, desperate to fill the void, spilled into the cavity on all sides, coiling in the base of the pit, extinguishing the column of lava. Then there formed a rising wall of hurling power and steam and smoke and ash. The tidal wave began to glide across the surface of the ocean, burly and hunch-shouldered, stately and regal, full of brute obstinacy. It had been trampling ahead all night, dragging with it snow and hail and lightning storms, thunderclaps and unfurling brocades of frost.

As the young wood faerie stood on the edge of the cliff, pale and knock-kneed in her diaphanous cape, she saw the great white teeth of the tidal wave open wide to chomp down on the cruise ship as if it were a meringue.

The ship was pulverized.

There was nothing left but the crumbs dropping from the fat lower lip of the satiated wave.

Nothing left, except for the ship’s young captain.

The captain had been on the top deck. He was knocked into the water by a swinging boom and then swept to shore, unconscious.He lay now on the beach below the wood faerie. She clambered nimbly down from the cliff. The captain was encased in a layer of ice, like a freezer-burned fish stick, and he glistened and shone in his white captain’s uniform as the moonlight danced upon his icy sheath. Stiff white needles of frost coated his cheeks, his full, plump lips and even his reddish eyelashes. The wood faerie skipped and scrambled over the smooth, round beach rocks to the young captain, who lay on the very spot where she was to meet the Faerie Queen.

Earlier that afternoon, deep in the frost forest, in the pink glow of the setting sun, the wood faerie had indeed found Cupid’s flower in a crevice between two rocks.

When sprinkled on the eyes of a sleeping man, the nectar of this flower will cause him to fall in love with whomever he first sees when he wakes up. Just as the wood faerie drew close to the captain, the Faerie Queen materialized in a snow squall of hissing glitter.

She carried a muff of white fur, and she was as silver as the moonlight and lit up with jewels that had been formed in the fires at the centre of the earth. Her eyes were violet, and her hair was as white and wild as the snowstorm that encircled them.

The captain’s bare feet were as pale and blue as bone, for he had lost his leather boots, and the white foam of the waves formed soft manacles around his ankles. His ice-encrusted waist was belted with chains of seaweed, as if the sea were intending to drag him away, but the faeries each took a wrist and pulled him to safety.

“Bring forth the flower,” the Faerie Queen commanded. The young wood faerie reached inside the folds of her cloak, which glimmered on her shoulders like the northern lights, and into the bodice of her petal dress. She withdrew a delicate bluebell that had been sugared with frost.

She tipped its sparkling nectar onto the eyelids of the handsome captain.

The sheath of ice that encased him shattered and fell away. The captain’s eyelids fluttered, and through his icy lashes he saw not one but two beautiful women, both as delicate as snowflakes, bent over him, gazing into his eyes with hungry love.