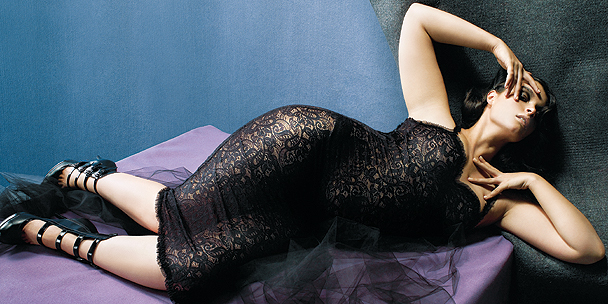 The minute Crystal Renn walked into the room, tossing her luscious mane of hair and flashing a killer smile, Gary Dakin, vice-president of client services at Ford Models, says that he knew they had a star on their hands. That was back in 2003 — and Dakin’s instincts were bang on. Since then, Renn has walked the runway for Jean Paul Gaultier, modelled for Dolce & Gabbana and appeared on the cover of Russian Harper’s Bazaar. She has also done spreads for the U.S., French, Italian and German editions of Vogue, as well as campaigns for Nordstrom, Torrid, Lane Bryant, Evans and Mango. The 165-pound model landed these jobs not because she fits the bill for “big and tall” but because she is “drop-dead gorgeous,” said Steven Meisel after he shot Renn for Vogue‘s annual “shape issue” in 2004. The famed photographer was so impressed with the Miami-born model that he immediately booked her for a shoot that he was doing for Italian Vogue.

In person, the 22-year-old radiates the confident sensuality of a Rubens model and the healthy voluptuousness of an Italian Renaissance muse. Her hourglass curves, creamy skin, lush eyelashes and ebony hair — which she inherited from her Cherokee ancestors — work their juju, whether she’s playing the femme fatale, the ingenue or the tease. Yet, her meteoric rise in the modelling world wasn’t without its setbacks. When she was 14 and first approached to model, the agent told her that she had to lose weight — a lot of weight. “Fifty pounds, minimum,” recalls Renn, who later went on to drop more than 85 pounds. “After major sacrifices, my hips went from 43 inches to 33 inches. Then I thought I was ready to work.”

Two years later, Renn won a modelling contract. She left the Mississippi home that she shared with her grandmother and moved to New York. There, she was told, yet again, that she had to lose even more weight. Living on lettuce, Diet Coke and steamed veggies, Renn became increasingly unhappy and withdrawn as she tried to starve her way into a career that wasn’t happening. Then came her breaking point: “My agent told me that I had to lose a few more pounds and then I’d land a bathing suit catalogue for $40,000. In the weeks leading up to the casting, I worked out eight hours a day. When I showed up for the job, I was told: ‘Those hips will never do. You have to be thinner!’ I realized then that I was killing myself for an industry that rejected me over and over again. Besides, I couldn’t be a model if I were dead. It was absurd.”

From that moment on, Renn stopped struggling with her natural curves. She also quit smoking, popping appetite suppressants and denying herself chocolate cake. After she returned to a healthy weight and relaunched her career as a plus-size model, she hit the talk-show circuit — most notably The Oprah Winfrey Show, where she proclaimed, “Thank God for curves!”

Impressed with Renn’s story, the editors at Simon & Schuster commissioned her to write an autobiography. Hungry, which will be released this fall, gave her an opportunity to share valuable life lessons. “I’ve definitely taken it upon myself to make people aware of the problems with not just the fashion industry; it’s all women,” she has said in past interviews. “Not to be against thin women, or big women or whatever — just to be who you are and be happy and to know that there are other things more important than ‘Oh, my gosh, do I have a roll?!’