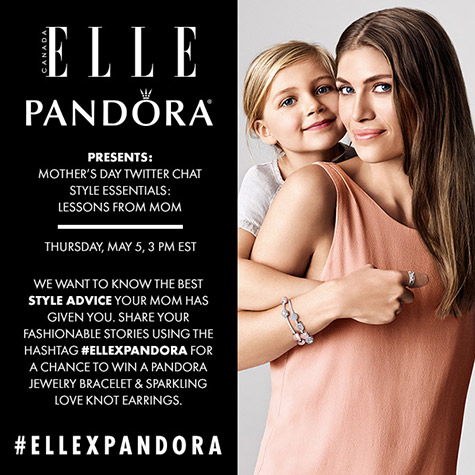 3. No purchase necessary. To participate in the contest, you must enter on Twitter by participating on the day of the chat, answer a question to @ellecanada during the chat and use the hashtag #ELLEXPANDORA.

• The prize is not exchangeable and non-transferable; and
• The prize has to be accepted as it is; and
• The contest organizers will determine with the winner the date; and
• If the prize or a portion of it is not used, no compensation will be given.

5. On May 5, 2015 at 4:00 PM in Toronto, at the office of ELLE Canada, a random selection of entry forms will be held among all eligible entry forms registered in conformity with section 3, in order to attribute the prize described above.

7. In order to be declared a winner, each selected entrant must

c) Sign the declaration and exemption form that will be given to him or her and return to the contest organizers within 5 days; and

14. Release. By participating in the Giveaway, entrants agree to release and hold harmless Pandora Jewelry, LLC and its respective subsidiaries, affiliates, suppliers, distributors, advertising/Sweepstakes agencies, and prize suppliers, and each of their respective parent companies and each such company’s officers, directors, employees and agents (collectively, the “Released Parties”) from and against any claim or cause of action, including, but not limited to, personal injury, death, or damage to or loss of property, arising out of participation in the Giveaway or receipt or useor misuse of any prize, and for claims based on publicity rights, defamation or invasion of privacy. NOTICE: This Contest is not sponsored, endorsed or administered by, or associated with Twitter. By entering into this Contest, you agree to release Twitter from all liability from claims associated with this Contest.

15. Liability – prize’s supplier. Each participant who is selected for a prize recognizes that upon reception of the confirmation of his status as the winner of the prize, the execution of the services in respect to the prize is the sole responsibility of the supplier of the prize, in this case, Groupe TVA inc., ELLE Canada and PANDORA. A declaration to this effect may be included in the declaration and exemption form.

16. Liability limit – use of prize. Any selected person releases Québecor Média inc., Groupe TVA inc., ELLE Canada and PANDORA and their parent and affiliated companies, their advertising and promotional agencies, their employees, agents and representatives from any and all liability for any and all damages he/she may suffer from the acceptance or use of his/her prize. In order to be declared a winner, any selected person agrees, if required, prior to obtaining his/her prize, to sign a Declaration Form to such effect.

18. Modification. The contest organizers reserve the right, at their sole discretion, to cancel, terminate, modify or suspend this contest, in whole or in part, in the case of the occurrence of an event, an error or any human intervention that could corrupt or affect the administration, safety, impartiality or the running of the contest as foreseen in these Contest Rules, if required. In any case, the contest organizers, their parent and affiliated companies, their advertising and promotional agencies, the suppliers of products or services related to this contest as well as their employees, agents and representatives cannot be held liable to award more prizes than those indicated in these Contest Rules or to award prizes otherwise than in compliance with these Contest Rules.

19. Impossibility to act – including labour dispute Québecor Média inc., Groupe TVA inc., and ELLE Canada and their parent and affiliated companies, their advertising and promotional agencies, their employees, agents and representatives will not assume any liability whatsoever in any case where their incapacity to act would result from a fact or a situation beyond their control or a strike, lock-out or any other labour dispute in their establishment or in establishments of organizations or enterprises which services are used for holding this contest.

21. Authorization. By entering this contest, any winner authorizes the contest organizers, their partners and their representatives to use, if required, his/her name, photograph, likeness, declaration related to the prize, place of residence and/or voice without remuneration whatsoever and that, at their discretion and without limit as for the period of use, in any media and on a worldwide scale, for publicity purposes or for any purpose that will or may be pertinent.

23. Identification of the entrant. For the purposes of these Contest Rules, the entrant is the person whose name appears on the entry form and it is to this person to whom the prize will be awarded if he/she is selected and declared a winner.

24. Precedence: If an article in this regulation were to be declared or deemed illegal, unenforceable or invalid by a competent authority, then this article would be considered null and non-written, but all other items would not be affected and would find application in limits and authorized by law

25. Rules contest. This is the official regulations and rules for the contest « ELLE Canada’s Style Essentials: Lessons from Mom » The contest rules are available on the ELLE Canada website.

26. Non affiliation. This contest is not affiliated or sponsored by Facebook.