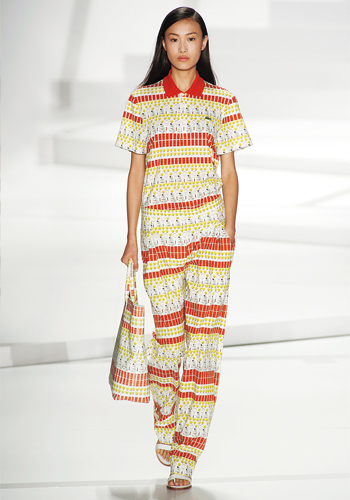 How designers take their closing bow after a collection is often a reflection of their character and style. Take Karl. He puts a supermodel to shame the way he owns that runway, walking with fierce, extroverted bravado. Or even Vivienne Westwood, whose zany, delightful exuberance draws attention away from the models when she joins them for the grand finale. Felipe Oliveira Baptista, Lacoste’s creative director, however, is more of the peekaboo dine-and-dash variety. Now you see him—now you don’t. His posture conveys a certain shyness: shoulders slightly hunched, arms held tightly to his sides and only a tentative smile on his face.

When I meet Baptista in Paris after the spring/summer 2013 shows are over, his mien is similar. As he settles into the egglike black chair, with his arms crossed and his shoulders rolled forward, he appears both vulnerable and relaxed. To say his office is spare would be an understatement. The inspiration board behind him is empty; even the top of his desk is mostly cleared.

“We’re done for this season, so everything has been taken down,” explains Baptista when I ask him about his monastic-like setting. “It’s refreshing for the first few days—and, yes, it’s very empty. But that is what I love about fashion: There’s always another blank page, another chance to tell new stories.”

This season, the tale that Baptista is telling is an homage to Lacoste’s 80th anniversary as well as a witty celebration of its future. His fourth collection for Lacoste, which always shows during
London,” explains Baptista. “He did this amazing book based on one painting where he zoomed in on little figures, which became pixels and dots up close but appeared to be stripes from a distance. I thought it would be great to do something like that with motifs from tennis.”

Get your fashion inspiration from LACOSTE’s FALL 2013 collection

But what about the infamous fanny pack? “It was a big thing in the 1980s, and I thought it would be fun to mix a print that has classic images of tennis from the 1930s with an accessory that people are trying to forget!” he says. “That’s the point. I think Vivienne Westwood once said ‘Fashion is everything that is not in fashion.’”

Baptista also wanted at least one piece that honoured the brand’s founder. He settled on the blazer that was René Lacoste’s signature pre-match jacket. “I wanted to reimagine how it would look today—yet still capture its iconic shape,” he says. “It also gave me an opportunity to pay tribute to an amazing man.”