Major League: Behind the August 2012 cover and model special

We eavesdrop on our Canadian cover girls, Heather Marks and Meghan Collison, two of the world's grand slam supermodels. 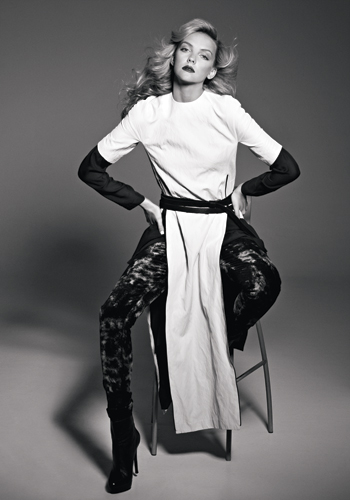 Soon there will be wind machines, pounding beatsand cries of “Magnifique!” but right now Heather Marks and Meghan Collison are sitting quietly in an east Toronto studio drinking tea and getting their hair done. In editorials, Collison tends to play the edgy chick, with smudged kohl and a cocky gaze, while Marks is best known for her angelic, doll-like features. But delve deeper into their history and surprising similarities emerge. They are both from Alberta, they were both born in 1988 and they were discovered by the same modelling agent—Kelly Streit of Mode Models—only a few years apart. Oh, and then there’s their mega-success in an industry where staying power is usually as ephemeral as the season’s trends. To get the inside scoop on the modelling life, ELLE Canada gave Marks and Collison a tape recorder and then listened in on their preshoot chat about fame, family, fashion—and the Calgary Stampede.

ON THE EARLY DAYS

Collison “I was the awkward, shy girl in high school. When I was 18, I heard on the radio that Mode Models in Calgary was having a model search. I wasn’t sure if I was tall enough. I went there with full makeup on, and I was so nervous. And I won!”

Marks “I was scouted when I was 12. I went to a convention in Calgary [The Calgary Woman’s Show] with my mom, and Kelly [Streit] asked me to enter this big modelling search. I was like ‘No, I’m not doing it,’ and my mom was like ‘Yes, you are.’”

Collison “They make you walk in front of the judges.”

Marks “Yeah! I was in soccer shorts, and I had a mushroom cut. My mom was running around, saying ‘We should put some blush on you; you’re so pale,’ but the second I walked onto the runway, I was red in the face because I was so embarrassed! I ended up winning.”

Marks “I used to shoot a lot with Steven Meisel for Anna Sui’s beauty campaigns.”

Collison “Those photos are still hanging on the wall in his studio!”

Marks “Yeah, they are! They’re kind of quirky and fun. A story for American Vogue was also a highlight—about 10 girls hanging out in a mansion in Yonkers. Such a cool experience.”

Collison “Steven has supported me a lot throughout my career. My favourite [image] is probably the one where they covered my body with tattoos and I’m lying on a bunch of flowers and patterns [Vogue Italia, December 2007]. They turned it into a limited-edition puzzle! They gave me one as a present.”

Marks “That’s amazing! Did you frame it?”

Collison “No. I should, though. It’s still in the box at my grandma’s house.”

Marks “When I was 15 and doing the show circuit, we were all a bunch of kids, like sisters, hanging out. Obviously all us Canadians love to see one another succeed.”

Collison “You support your own.”

Marks “Yeah, whenever you’re backstage at a show in Europe, you tend to see the Canadian girls hanging out together. Mostly.” [Both laugh]

Collison “Everyone supports one another. You see the same girls at all the different shows. You bond with one another. What do you do backstage?”

Collison “I don’t know how you do that. I tried to read a book backstage once. I read 10 pages and realized I hadn’t understood a word. I’m an iPod person—I put my earbuds in.”

ON CALGARY VS. EDMONTON

Marks “Bring on the rivalry! [Laughs] I’m such a nature girl, so it’s great to be able to hike in the mountains. We have such beautiful lakes— and we have a better hockey team….”

Collison “I’m not going to fight that. [Laughs] I don’t know anything about hockey. I could list things like the mall, but really I love Edmonton because my family is there. It’s home.”

Marks “Exactly. It’s home, which makes it more special than anywhere else in the world.”

Collison “Do you know where I want to go? The Calgary Stampede. You should come with me.”

Marks “I go every year!”

Collison “I’ve never been! Can we go get me a cowboy hat?”

Marks “Of course. I wear it all—the boots, the hat. Come with me next summer.”

ON THE MODEL LIFE

Marks “Every day is completely different. That’s my favourite aspect of it.”

Marks “You never know what’s around the corner.”

Collison “‘Pack your bags; you’re going to Paris!’ That kind of thing happens all the time.”

Marks “You get a call today for something tomorrow. We’re always on the edge of our seats.”