Made in Canada: Line Knitwear 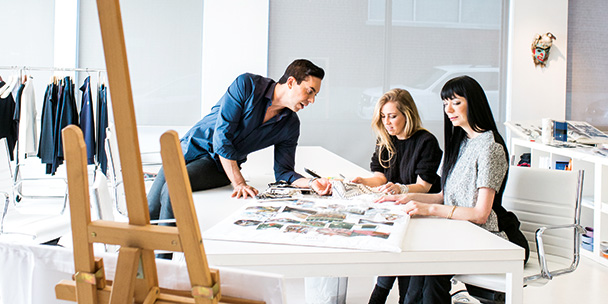 Since its launch in 2000, Line Knitwear has become one of Canada’s most loved fashion brands, selling across the globe and worn by A-listers like Jennifer Garner and Taylor Swift. Here, its founders reminisce about their early days and offer a glimpse into what’s next.

WELLS: “I’ve always been into fashion. Right out of school, I had a streetwear store in London [Ont.]. That’s how John and I met.”

MUSCAT: “She was the queen of PVC at the time. Do you remember Electric Circus?”

MUSCAT: “I was representing a multi-brand showroom in Toronto. And one category that seemed to be lacking was knitwear. That’s when we started. We said ‘Let’s see what we can do in the next five, 10 years.’And we’ve been doing it for 15 now.”

READ MORE: Made in Canada with Holly Dyment

WELLS: “Our first big milestone was when Holt Renfrew picked us up.”

MUSCAT: “And then we cracked the U.S. market. That’s when everything became a lot more serious. A lot of people have these relationships in Canada, but to be successful you have to crack Europe or the States.”

WELLS: “It’s hard because talent can only take you so far; there’s a lot of talent in this country, but if they don’t have the financial support, it’s almost impossible.”

MUSCAT: “The Canadian fashion industry needs more support from the government. I feel passionate about that.”

WELLS: “We went on our own and established an office in Asia. It opened many doors: being able to source whatever we wanted. We go to the best yarn shows and manufacturing shows. For fall 2015, we’re working with artisans in Uruguay, which offers a whole other level of artistry and technique. It’s very special, the way they can start and stop the knitting to create these patterns of mixing yarns.”

MUSCAT: “We also changed our design team this season.”

WELLS: “You have to have the right energy working together, and Hinda [Assaraf] has become an amazing component of how we do things here. She was VP on the business side, and we were like ‘You have to be part of design!’ Her eye is amazing.”

MUSCAT: “We have two strategies now. John & Jenn [the diffusion line launched four years ago] is at more of an opening price point, and Line is more elevated—we’re taking it to the next level. It’s funny: We were sitting in these meetings talking about how to elevate the brand, and part of what came out of that was going back to our original logo. We had it right the first time!”

WELLS: “We even went back to the same colour. Back to our roots.”