High fashion and Olympic sport can go hand in hand. We round up the best designer and Olympic apparel collaborations at the London 2012 Olympics. 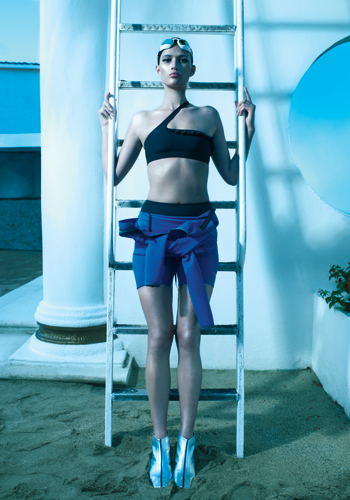 What do Stella McCartney, Giorgio Armani and Ralph Lauren all have in common? Other than being fashion heavyweights, all three designers will be outfitting athletes from their home country as they compete at the London 2012 Olympics. They’re not the only fashion labels whose designs will be seen at this summer’s Olympics. Prada, Hermès, Salvatore Ferragamo and even Karl Lagerfeld will also be key players. (Team Canada will be outfitted by a dedicated design team at The Bay.) To celebrate these
Olympic fashion partnerships, we’ve rounded up the best designer and Olympic apparel collaborations.

This may be the most well-known designer and Olympic apparel collaboration. For the London 2012 Olympics Stella McCartney will outfit British Olympic and Paralympic athletes under her namesake label for Adidas. The collection was unveiled for the press earlier this year and heavily features a blue and white Union Jack motif with highlights of red. The designs were met with a bit of controversy because critics felt that the Union Jack flag was unrecognizable. Of course, this isn’t Stella’s first foray into sportswear; she has maintained a highly successful women’s sportswear line with Adidas since 2007.

Although this may be his first time outfitting the Italian Olympic Team, Giorgio Armani certainly isn’t a fashion rookie. For The London 2012 Olympics, the Italian clothier designed the uniforms for Team Italy under his Emporio Armani EA7 sportswear label. The Armani aesthetic shines throughout the collection and instead of using the colours of the Italian flag (red, white and green), Armani chose to outfit the athletes in navy blue and white. We wonder if it’s a coincidence that navy blue was also one of the main colours used in Armani’s Spring/Summer and Haute Couture collections.

Team Italy is getting a double dose of high fashion. Earlier this year, it was announced that Prada would sponsor and supply the uniforms for the Italian National Sailing Team at the Olympic and Paralympic Games. Technical staff members of the sailing team will also be wearing garments by the luxury label and reportedly, the Prada logo will appear on the team’s hulls and sails.

What will Canadians be wearing for the Olympics? Find out here.

PUMA has outfitted Team Jamaica for the Olympic games since 2002. For this year’s Olympics, they enlisted designer Cedella Marley as creative director. Three-time Olympic gold medalist Usain Bolt proudly modeled the eye-catching green, black and gold designs when they were revealed in London earlier this year. What makes this collaboration special? Jamaican music legend Bob Marley is Cedella’s father.

Athletes from the Republic of San Marino, a tiny microstate that is by surrounded Italy, will also have the chance to don designer garments as they go for gold this summer. Reportedly Italian luxury label Salvatore Ferragamo will dress San Marino athletes in tailored trenchcoats, blazers, trousers, and silk crepe dresses.
Footwear won’t be neglected either; men will wear blue loafers and women will wear squared toes heels decorated with Ferragamo’s signature Grosgrain bow.

In 1837 Theirry Hermès founded the label Hermès and manufactured horse harnesses for Europe’s elite. It makes perfect sense then that the luxury label would go back to its roots and dress the French equestrian team at the London Olympics. Members of the show jumping and eventing team will wear fitted Hermès riding jackets that are
royal blue with touches of red and white.

DESIGNER: Who else? Karl Lagerfeld

In honour of the London 2012 Olympics, fashion designer extraordinaire Karl Lagerfeld decided to design a capsule collection inspired by the Games named “Team Karl.” The collection (along with two other collections under the Karl Lagerfeld brand) was unveiled at a swanky affair just days before the London Games at the high end department store Selfridges. Ironically enough, Lagerfeld has reportedly admitted that he doesn’t plan on even watching the real Olympic games.