Dressing Team Canada for the London 2012 Olympics is no easy feat. Suzanne Timmins, fashion director of The Bay, gives us the behind-the-scenes scoop on what our Canadian athletes will be wearing this summer. 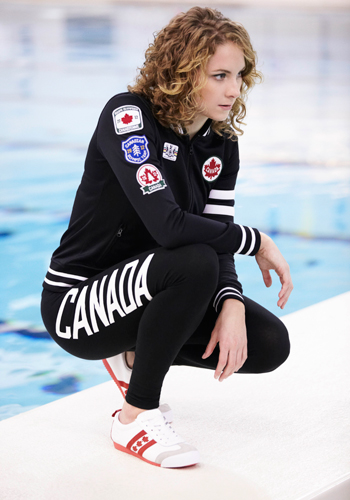 It’s official—Olympic mania is in full swing. By this time next week, all eyes will be on the athletes as they go for gold at the London 2012 Summer Olympic Games. Although
style and sport may seem worlds apart, fashion plays an important role in the Games—just ask Stella McCartney, Giorgio Armani and Ralph Lauren who design the apparel for Team Great Britain, Team Italy and Team USA, respectively.

Here at home, The Bay—our country’s iconic department store—has the honour of dressing Team Canada. We spoke with Suzanne Timmins, Senior Vice President and Fashion Director of The Hudson’s Bay Company who oversees the Olympic design team, to get the full scoop on outfitting our athletes for the biggest event of their lives.

Canadian Olympic Apparel: “Let’s bring it back to Canada”

The design process for the London Games started just as the Vancouver 2010 Games ended. “One of the reasons the Vancouver 2010 collection was so successful for us, other than it being the Canadian Games, was that we featured iconic Canadian items,” Timmins explains. “Canadians really adopted it.”

That was in stark contrast to the Beijing 2008 Olympic collection. “We learned our lesson hard when we did the 2008 Summer Olympics for Beijing,” Timmins says. “We built that collection as a nod to Beijing and China.” When it came to the London 2012 Olympics, Timmins and her team went back to basics. “We said “OK, let’s take the same premise that made the Vancouver collection strong, which was bring it back to Canada, [and] make it feel Canadian.”

The Bay outfits Team Canada for five different elements of the Olympic Games: the Opening Ceremonies, Closing Ceremonies, podium presentations, award ceremonies and the villagewear (what the athletes wear when off-duty). For the London 2012 Olympics, Timmins and her 12-strong team built an inspiration board that had “a vintage old backpack with different crests and badges [on it] from all the different provinces as well as different countries. We had a fisherman sitting in boat with a summer toque on who looked like somebody who might have been up the Gaspé, and guys riding their bikes and wearing windbreakers.”

Past Olympic collections, like the pieces created for the 1976 Montreal Summer Olympics, were another inspiration. “We love the
colour blocking that they used and we thought that looked very modern and very today,” Timmins explains. “The 1912 Summer Games in Stockholm where they [Team Canada] just used the Maple Leaf on their chest also inspired us.”

Read more about Suzanne’s style tips for the London 2012 Olympics, her Olympic obstacles and memories on the next page…

As one would expect, dressing Team Canada comes with a few obstacles. For Timmins, the most challenging part comes down to sheer numbers. “We’re fitting over 400 athletes, which include staff and coaches before the teams are announced. This means there are 400 different shapes and sizes. There are also different ages. The bodies of the athletes are so diverse—we have the small little gymnast and the big weightlifter. It’s one thing to do a collection using 5’10” models that are all a size two but in this case, it’s quite something.”

The London 2012 collection features key pieces like the Canada Windbreaker, The Jean Jacket, Crew Neck Sweatshirt and Track Jacket. Timmins’s favourite piece from the collection? The Jean Jacket ($100, at
thebay.com). “It’s a very casual piece, with a great fit,” she says. “It’s made with worn denim that has been washed many times and it has patches all over it. I bought it for every single one of my nieces and nephews and for myself. The idea of using these patches in throughout collection came up because we [the design team] felt that as Canadians that we are travellers. We not only explore our own country but outside our country as well. We thought why not make a collection of patches which represent our different provinces, animals, and the different things that we [as Canadian] stand for.”

The 2012 Canadian Olympic Team Replica Apparel collection, which is available for purchase at The Bay, Zellers and online at thebay.com, is essentially the same as what the athletes will be wearing in London. “We built what we call a ‘replica’ that sometimes is exactly like what the athletes are wearing and in different colours,” explains Timmins. “Let’s say the athletes get a grey T-shirt with red maple leaf on it. We might sell it like that but in five different colours as well. The athletes do get one or two pieces that are not replicated at all which makes sense because as athletes they’ve earned that.”

When asked about her most memorable Olympic fashion moment, Timmins reflects back to the 2010 Vancouver Games. “It has to be Vancouver. I think in my career it’ll be a moment that I’ll remember forever. I remember landing at the Vancouver airport, going to the Games, entering the city and seeing everybody wearing our gear and the mittens. You look around and you can’t believe it. It’s like you designed something and everybody’s wearing it. I remember calling my mom from Starbucks and saying ‘You wouldn’t believe it! I was just really, really proud. I like seeing people wear the gear because that means they like it. I like seeing the athletes wear it because that means they’ve adopted it. We want to make the athletes happy and we want Canadians to feel proud.”