Kate Middleton maternity style: 8 reasons why we love her look

We chart the top 8 reasons why the expecting Duchess of Cambridge endures as our favourite style icon. 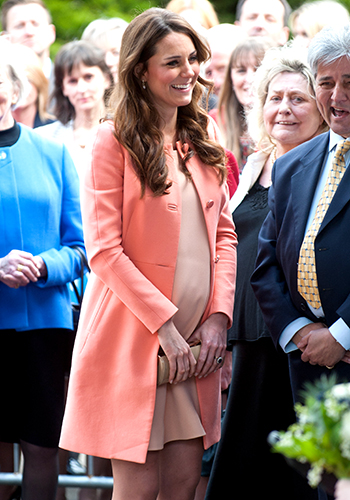 While we’re tempted to chalk up Kate Middleton’s recent luminous public appearances to pregnancy glow, the fact is, she’s always radiated with a relatable charm and stellar, game-changing style. And not much has changed since the news of the royal pregnancy broke early December last year—except for the very public monitoring of her growing baby bump.

“Our style has dramatically changed and also our perception of being pregnant has changed,” says Rachel Matthews Burton, celebrity stylist (and British expat). “It’s gone from the turn of the last century where you were in the family way and it was not to be talked about, to nowadays with women baring bellies in summer.”

And for someone has universally watched as the Duchess of Cambridge, the style-conscious voyeurism has only heightened with the news of a baby royal on the way. We chatted with Matthews Burton about the growing influence of Kate’s maternity style (and bump) and listed the top reasons why even the Duchess’ maternity wardrobe makes us happy.

Why we love the maternity style of Kate Middleton reason #1: She makes the royal style her own

Think about it: the strictest fashion rules that will ever be imposed on most of us are high school uniforms and office dress codes—and even those are widely interpreted. “What most people in the public don’t realize is that there are a very stringent set of rules from the House of Windsor, who won’t tolerate certain outfits, certain expressions,” says Matthews Burton. Now consider what a pregnant Kate does with a polka-dotted Topshop dress and black Ralph Lauren blazer: creates an instant top-selling outfit and maintains royal dignity in tact. Classy.

Why love the maternity style of Kate Middleton reason #2: She tributes a lineage of well-heeled Royals

Fun historical fact: When Princess Anne, the Queen’s daughter, was pregnant, she actually had a lot of her everyday clothes let out and then taken back in again in her protest to wearing standard maternity wear. Then of course, there was Princess Diana. “They were all wearing Miu Mius at one point in their pregnancy,” Burton Matthews notes. “Just with frills and jewels.” The Duchess of Cambridge has her naturally impeccable style. “She not only has to comply with a particular look that suits the occasion, she has to find her own expression and adhere with the Royal family’s standards,” she adds. “And then on top of that, she’s pregnant!”

For more reasons why we love the maternity style of Kate Middleton (including her affinity for fascinators!), read on to the next page…

Why we love the maternity style of Kate Middleton reason #3: She gives us no excuse to wear flats

It’s not uncommon for the body to retain fluid during pregnancy and feet to swell two sizes larger (we’ve all seen the unfortunate photo of Kim Kardashian’s swollen feet stuffed into super-tight heels). “It’s a very individual response how your body reacts to pregnancy,” says Matthews Burton. While most women (pregnant or not) opt for comfort, there’s Kate, baby bump on display, making another public appearance in her signature L.K. Bennett nude pumps—and putting us all to shame.

Style showdown: Who has better style, KATE OR PIPPA?

Why we love the maternity style of Kate Middleton reason #4: …and to wear headwear

One of the best traits about Kate Middleton’s look? “You can follow her style to a tee and the only thing that makes it over the top is perhaps putting a fascinator on her head,” says Matthews Burton, noting the very British tradition of hats, tracing back to the Ascots. And we all should really be wearing more fascinators anyway.

Why we love the maternity style of Kate Middleton reason #5: Bottom line, we still want to look like her

Maternity wear has changed dramatically in recent years, just look to the course of royal pregnancies. Tracing back to Princess Diana, “the idea was to be modest in your pregnancy and not show the bump,” Matthews Burton says. “Whereas today, we do the exact opposite. Maternity wear is form-fitting, it’s flattering—it’s a lot more flattering to show the bump than wear this gigantic wigwam shape over top of yourself.”

Just look to Kate’s bump-hugging Erdem Sophia dress worn to a recent primary school appearance. “If you were pregnant in the ‘70s, ‘80s and even the ‘90s, to a certain extent, the idea was that you stepped away from fashion and wore clothing simply for function, and now that is not the case at all,” says Matthews Burton, who cites boutiques such as Kick Maternity in Toronto, which specialize in on-trend maternity wear.

Why we love the maternity style of Kate Middleton reason #6: She makes a fashionable pregnancy look easy

Other then an empire waist here and kitten heel there, Kate’s maternity wardrobe hasn’t detracted much from her regularly outstanding sartorial choices. A feat that’s infinitely more difficult than the Duchess leads on, Matthews Burton notes. “Kate’s got a ridiculously demanding schedule and the worst time in pregnancy is right at the beginning when you’re exhausted— it’s right when morning sickness happens, which by the way, is 24/7,” she says.

“She doesn’t have a choice, but every other woman looking to her can use her as a standard and just think, ‘If Kate can get up and do public appearance after public appearance, then I can make an effort to comb my hair.’”

Why we love the maternity style of Kate Middleton reason #7: She’s just like us—sort of

Whether it’s a Mulberry tweed coat or off-the-rack Topshop dress, Kate masterfully toes the line between high and low fashion. “With the foundation of her style being very High Street, I think that’s a wonderful message for the Royals to send to the general public in a state of recession,” says Matthews Burton. “They seem don’t seem out of reach from the ‘common people’ and because they’re not flaunting something that’s inappropriate.”

And propriety, as far as the Royals are concerned, has come a long way. “Look at the Queen Victoria days, she wouldn’t be walking around in a mini-skirt, or a sweater and jeans for example! But it’s a note of respect to the common people,” she adds. “So I think she does a marvelous job of making herself relateable.”

Why we love the maternity style of Kate Middleton reason #8: She’s the hottest woman in England

If there’s one takeaway from Kate’s globally influential style, it’s this: “There’s a hell of a lot of discussion on how she looks,” states Mattews Burton. And the beauty of it is that she makes it all look so effortless. “She’s just been voted the most influential style icon in England. She beat Kate Moss for God’s sake!”